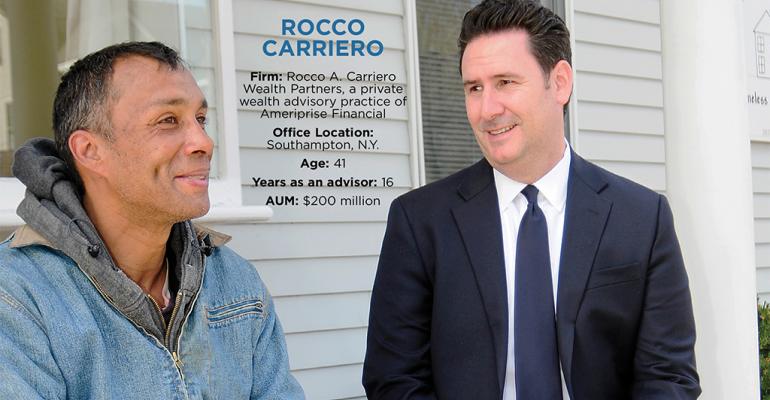 Serving the Other Side of the Hamptons

During the summer months, the East End of Long Island becomes a den for the ultra-wealthy who trade their penthouses in New York for beachfront homes in the Hamptons, lavish lawn parties behind privet hedges, and village streets clogged with European sports cars.

But advisor and full-time resident Rocco Carriero sees a different, less-glamorous side. There is considerable poverty within these villages. “Everybody just assumes that everybody in the Hamptons is wealthy, and that’s not the case,” he says.

One of those organizations is Maureen’s Haven, an outreach program that picks up homeless people and puts them in shelters during the winter months. This past winter, one of the harshest on record in the Northeast, Carriero led a campaign to collect 2,500 pairs of socks and underwear for the shelter’s homeless men and women. He and his team also sponsor and serve dinner at the shelter every Sunday night.

He also organized 15 fundraisers for Brighter Tomorrows, a home for battered and abused women and children in the area. Every Christmas, he coordinates an annual holiday party at the shelter, where he, his team and his family provide a home-cooked meal and personally serve the residents. They have gingerbread decorating for the kids, and they bring in Santa, who gives gifts to the mothers and children.

One year, the shelter had a problem with bedbugs, so Carriero raised the funds to pay for a comprehensive extermination and for metal bed frames. The old bed frames were made of wood, and the bugs would burrow into them.

“I’m not the type of person that just gets on a board just to be on the board and partake in bottled water meetings,” Carriero says. “I usually try to come with some kind of initiative and try to see it through.”

One recent initiative is the East End Hospice, an organization raising capital to build the first inpatient hospice facility in eastern Long Island. As treasurer, Carriero has helped raise $8 million over the last five years by reaching out to his clients and other advisors, making his own financial contributions, and sending out community appeal letters. The project, currently under construction, should be completed by September.

“We do well here, and there’s a lot of privileges for us by doing well,” Carriero says. “I just feel the responsibility to give back.”