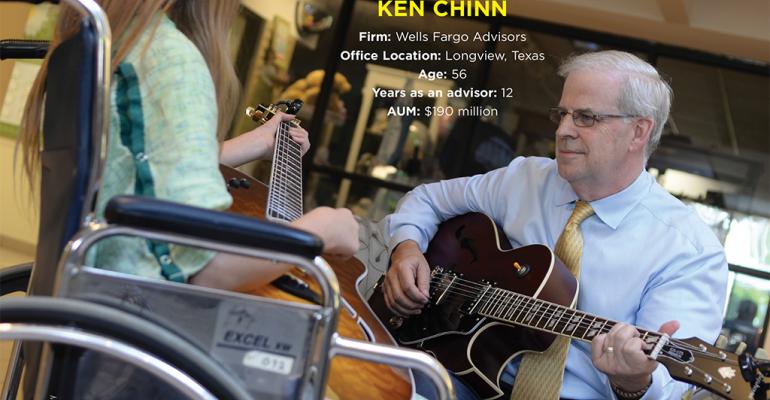 The Gift of Music

While Ken Chinn’s daughter, Tara, received treatment for frontal lobe epilepsy at the Children’s Medical Center of Dallas, she passed the time playing the guitar. When a nurse noticed, she introduced the Chinn family to musical therapy—using the process of learning to play music to help patients convalesce.

Chinn loved that idea, but was stunned to learn that the program in place only consisted of part-time therapists, some interns and so few guitars that students and teachers would pass one back and forth during a session.

After the nurse learned he was involved with various arts commission boards and the T-Bone Walker Blues Festival, she introduced him to the Seacrest Studio, a radio and television station built by TV host Ryan Seacrest in the Children’s Medical Center to help patients engage in creative activities during their stay.

Chinn helped the studio put on a concert, and he presented the promised 10 guitars to the hospital along with an extra one autographed by country musician Doyle Dykes for a Make-A-Wish Foundation patient.

His daughter seized upon the momentum and launched several social media pages to showcase the efforts. When donations started pouring in, Chinn quickly filed a 501(c)3, and in 2013 the Chinn Guitar Project was born.

The foundation has since donated more than 350 guitars to musical therapy programs and schools around the nation, and helps the programs find instructors, all paid for by private donations.

Sometimes, Chinn volunteers to teach a class himself, either at the Boys and Girls Club of Gregg County or at his daughter’s school.

“There’s a teacher that teaches full-time, but I go in Thursdays for about an hour and just jam with the students,” Chinn said. “We tend to have more fun in my class, but they get more of the fundamentals and the structure with the teacher.”

Chinn said that donations aren’t enough to sustain the Guitar Project in the long term, so he is currently working on securing corporate sponsorship. He hopes to get a guitar manufacturer involved, and get donations from some of the mutual funds and money managers he works with to ramp up the program.