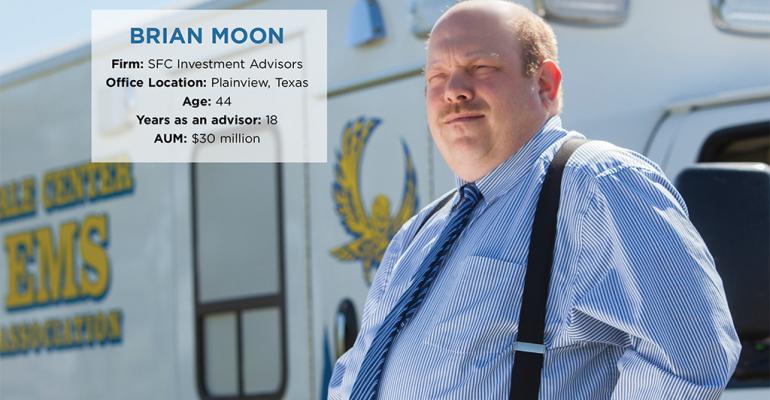 When Brian Moon and his family moved to Hale Center—an isolated town of 2,200 people in northwestern Texas—in 2007, the only emergency medical service center was closed; the town had made three attempts to keep it running over the past five years, none successful. The gravity of its absence was highlighted a year earlier when a Hale Center resident died of a heart attack because the ambulance from neighboring Plainview couldn’t respond in time.

Worried about his own family, and a community where 40 percent of the population is over 60, Moon paid the EMS a visit.

He found it relied on an ambulance more than a decade old and equipment that was even older. Heart monitors and ventilators were out-of-date, there was only one defibrillator, and the staff didn’t have radios to communicate.

Moon volunteered to launch a fundraising campaign with an initial goal of $25,000, though many in the community were skeptical.

“Frankly, everyone said that no one would give to an EMS service that closes down all the time and even led to someone dying,” Moon said. “A lot of people were angry at this EMS because of all the closures and the problems it was having.”

But Moon took a different tactic, and became a kind of small-town media mogul. He enlisted volunteers to construct a new billboard, produced a newsletter featuring interviews with residents, and offered surrounding businesses advertising opportunities in exchange for donations to the EMS. Moon sent about 600 letters and penned articles in a local paper to promote the campaign.

The campaign raised $38,000 in the first year. By the end of the second, Moon had raised $85,000, enough to buy a new heart monitor, defibrillators, oxygen tanks, radios, new uniforms and better training for the staff.

Moon joined the EMS’s board of directors and used his financial expertise to create a sustainable business plan that ensured the EMS wouldn’t close again. He also authored a grant letter to the Federal Emergency Management Agency that resulted in an $116,000 for a new ambulance.

Moon stepped down from the board in 2012, but still helps the Hale Center EMS with tax issues. He’s also working on new grants to procure a backup ambulance.

“It’s Hale Center’s first line of defense medically,” Moon said. “This is what they need and for me, it was nice to do something that worked.”