Elias Eldabbagh was sentenced to 10 years in prison for trying to steal $31 million in COVID-19 relief funds. He used a stolen identity to disguise ownership of his company Alias Systems LLC and that same stolen identity to submit Paycheck Protection (PPP) and Economic Injury Disaster (EIDL) Loan applications. In total, he fraudulently stole $2.385 million earmarked for taxpayers in need from these relief programs and used that money to buy a Tesla Model 3 and pay for personal expenses ranging from hotels to attorney fees. He also converted hundreds of thousands of dollars into cryptocurrency.

9. What Happens in Vegas…
wsfurlan/iStock/Getty Images

First, Umoren prepared and filed with the IRS tax returns for clients that included false deductions and fictitious businesses to generate larger refunds than the clients were entitled to receive. In one instance, to collect a tax preparation fee, he drove to a client's house with police lights attached to his vehicle and posed as an FBI agent, wearing a fake badge and tactical gear, to demand payment of a tax preparation fee.

Second, Umoren fraudulently sold his company for approximately $3.8 million, significantly more than it was worth, by providing potential buyers fraudulent documents, including forged bank statements, fabricated return preparation fee reports, false personal tax returns and other tax forms that had never actually been filed with the IRS—as well as the stolen tax and personal identifying information of approximately 12,000 taxpayers who were not company clients.

He was ultimately ordered to pay nearly $9.7 million in restitution to the United States and the other victims of his fraud schemes.

Christopher Burnell, a former sheriff's deputy, falsely claimed to have accumulated tens of millions of dollars from lawsuits he purportedly won against the San Bernardino County Sheriff's Department and Kaiser Permanente. As part of the nearly seven-year scheme, Burnell encouraged victims to invest with him, offering exclusive investment opportunities that promised rates of returns as high as 100%. Burnell, instead, spent the money on gambling and luxury items, including private jet trips, designer merchandise and luxury cars. At his sentencing hearing, Judge Fitzgerald described Burnell as "one of the most evil people that I have ever dealt with in the law" and ordered him immediately remanded to federal custody. He was sentenced to 168 months in federal prison and ordered to pay nearly $7.6 million in restitution.

Michael Dexter Little was sentenced to 19 years and 6 months in prison and ordered to forfeit at least $12.3 million. From 2019 to 2021, Little filed a series of false tax returns claiming massive, bogus fuel tax credits. He filed the false returns in his own name and in the names of co-conspirators and identity theft victims. Little and his co-conspirators obtained at least $12.3 million in fraudulent tax refunds and attempted to obtain at least $27 million more. Little and his co-conspirators also conspired to launder their ill-gotten gains and used significant portions of the fraudulent tax refunds to purchase real estate and other assets.

The stars of the reality TV show "Chrisley Knows Best," Todd and Julie Chrisley, were found guilty of tax evasion and conspiracy to defraud the IRS in June. To evade collection of half a million dollars in delinquent taxes owed by Todd, the Chrisleys opened and operated corporate bank accounts only in Julie's name. Once the IRS requested information about the bank accounts, the Chrisleys transferred ownership of the corporate bank account to a relative to further conceal their income from the IRS. The Chrisleys also failed to file tax returns or pay any taxes during the 2013-2016 tax years, and they were found guilty of other crimes, including conspiracy to defraud banks out of more than $30 million in fraudulent loans.

5. Taking the Fraud on the Road
AlexLMX/iStock/Getty Images

Mehef Bey and Iran Backstrom conspired to promote a nationwide tax fraud scheme to more than 200 participants in at least 19 states causing more than $64 million in false tax refund claims filed. Their scheme involved recruiting clients and preparing false tax returns on the clients' behalf by convincing them their mortgages and other debts entitled them to tax refunds. Between 2014 and 2016, seminars across the county were held to publicize the scheme.

Bey and Backstrom were sentenced to 11 years and 8 years, respectively, in prison. In addition to the term of imprisonment, the district judge also ordered Bey and Backstrom to serve three years of supervised release and pay approximately $26.350 million in restitution to the United States.

4. Up in Smoke
KampolG/iStock/Getty Images

A former decathlete for the Philippines, David Bunevacz, fraudulently raised more than $45 million from investors. Going back to 2010, Bunevacz created various business entities that he claimed were involved in the cannabis industry and the sale of vape pens containing cannabis products. Bunevacz misappropriated the vast majority of the funds to pay for his own lifestyle, including a luxurious house in Calabasas, trips to Las Vegas, jewelry, designer handbags, a lavish birthday party for his daughter and horses. Operating through his cannabis companies, Bunevacz raised more than $45 million from at least 100 victim-investors, according to the government's filing. Judge Fischer found that Bunevacz caused losses of approximately $35.27 million. At the sentencing hearing, Judge Fischer noted that Bunevacz had "preyed on individuals who believed he was their friend" and that the "seriousness of [his] conduct cannot be captured in mere dollars and cents."

Paulette Carpoff was sentenced to 11 years and 3 months in prison for her role in the biggest criminal fraud scheme in the history of the Eastern District of California. Carpoff served as chief operating officer of DC Solar where she controlled Ponzi-like payments that hid the company's lack of third-party lease revenue, caused fake engineering reports for MSGs that the company sold but never built, and helped fool investors into thinking DC Solar was a success. In November of 2021, her husband, Jeff Carpoff was sentenced to 30 years in prison and ordered to pay $790.6 million in restitution for conspiracy to commit wire fraud and money laundering.

Michael J. DaCorta was sentenced to 23 years in federal prison for conspiracy to commit wire fraud and mail fraud, money laundering, and filing a false income tax return. As part of his sentence, the court also entered an order of forfeiture of nearly $2.82 million, a portion of the proceeds of the charged criminal conduct. For nearly eight years, DaCorta ran an investment company named Oasis International Group Ltd. (OIG). DaCorta and his co-conspirators persuaded at least 700 victims to invest in OIG through promissory notes and other means, causing victims' losses exceeding $80 million. DaCorta and his conspirators then used the balance of the victim-investors' funds to make Ponzi-style payments to perpetuate the scheme and to fund lavish lifestyles, which included luxury cars, multimillion dollar homes, lavish trips and more. Meanwhile, DaCorta underreported his income on his 2017 federal income tax return, claiming negative income and receiving a tax refund.

Michael Avenatti was sentenced to 14 years in prison for defrauding four of his clients out of millions of dollars and obstructing the IRS' attempts to collect payroll taxes from his coffee business. He must also pay $10.8 million in restitution to his clients and to the IRS. The 14-year sentence will be served consecutively to sentences Avenatti is currently serving after he was convicted of stealing proceeds from Stormy Daniels, the adult film actress he represented in her legal fight with former President Donald Trump. Avenatti also was convicted for trying to extort millions of dollars from Nike. Avenatti's latest sentencing follows his guilty plea in June to a tax-related charge and four counts of wire fraud. At the time, he said he wanted to spare his family from any additional embarrassment. At the sentencing hearing, the judge said Avenatti "has done great evil for which he must answer." 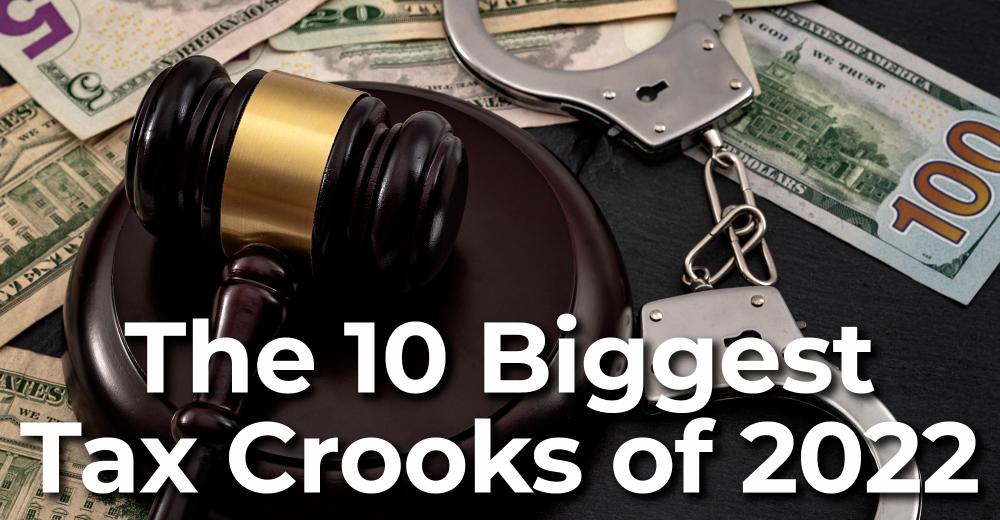 Next Up
Meet the Ten to Watch in 2023
Start Slideshow ›