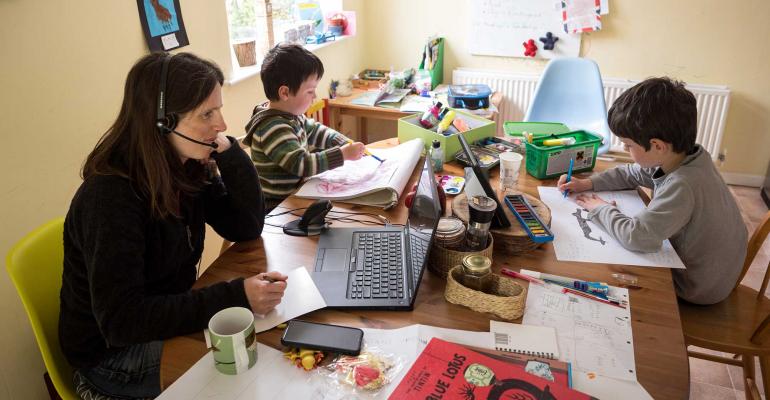 Working from Home in a Pandemic Is Not Shirking It: Lionel Laurent

“We are home working alongside our kids, in unsuitable spaces, with no choice and no in-office days,” Stanford economist Nicholas Bloom said in March.

(Bloomberg Opinion)—Working from home, once jokingly dismissed as “shirking” from home, is back as a pandemic lifeline for economies amid a resurgence of Covid-19 cases in Europe. Governments in Britain and France, having goaded workers back to the office after lockdown, are now urging them home again. The sound of frustrated bosses gritting their teeth can be heard across the City of London, as big firms from Goldman Sachs Group Inc. to Citigroup Inc. pause the back-to-work push while keeping the office open.

There’s a sense of whiplash among white-collar workers, who just weeks ago were told that it was time to put the economy first and get back to their cubicles and open-plan desks. There should also be palpable relief. Being able to pull in a salary while safe at home is a privilege hospital staff, care workers and supermarket cashiers can’t have.

Still, we know from the first wave of lockdowns that those stock images of remote workers logging on from bed with a smile and tousled hair, or of barefoot parents deftly bouncing toddlers on their knee while firing off an email, are a fantasy. While surveys suggest working from home is popular among employees crushed by the grind of the daily commute, the grumbling of CEOs that productivity and company culture are vulnerable isn’t entirely wrong.

The mass push to work from home earlier this year was unprecedented. It represented an estimated 42% of the U.S. labor force (or more than two-thirds of economic activity when weighted by contribution to GDP), but it had drawbacks. The apparent productivity gains of being at home instead of on the subway began to look more like the result of a steadily lengthening work day, according to multiple network operators, rather than supercharged efficiency.

Juggling Zoom calls and childcare made matters far worse, one reason governments in Europe put so much emphasis on reopening schools this fall. “We are home working alongside our kids, in unsuitable spaces, with no choice and no in-office days,” Stanford economist Nicholas Bloom said in March as he warned of a looming “productivity disaster.” He’s usually much more positive: His past research has linked working from home to a 13% rise in performance and a 50% drop in employee departure rates.

While corporate bean counters dream of one day dumping costly commercial real estate for digital offices in the cloud, the reality of the cost of living in big cities means home offices aren’t up to scratch.

More than half of Americans working from home do so from shared rooms or bedrooms; more than one-third have poor internet connections or none at all. A June survey of Japanese workers found that even among early adopters of remote work, only a third found it more productive than working in the office, citing poor equipment. Deutsche Bank AG’s monthly survey of financial-market professionals found their assessment of whether they were on balance more productive or less productive at home declined from 20% in June to 11% in September. (It had plunged to -13% in April as everyone was forced home full-time all at once.)

That’s the short-term assessment. We don’t yet have evidence of mass remote work’s impact of longer term on company productivity, but the current outlook is mixed at best. It’s hard to see how the field of research and development — already being thinned out by recession-related cuts — is going to win out in this environment.

Given there’s little freedom right now to create a hybrid model combining office and home — the preferred option for the majority of workers surveyed at French carmaker PSA Group, for example — bosses should do more to make the work-from-home experiment palatable and safe for all involved. Subsidizing utility bills, workspace equipment like ergonomic chairs, and even expenses such as rent (as one Swiss firm was ordered to do in May) would increase satisfaction. Managerial habits should also change, with more trust given to employees, if companies are serious about attachment to “culture.”

The right to disconnect, which had begun to spread worldwide before the pandemic, is critical. The output gains of remote work come from contented and engaged workers, not the cheaper transaction cost of being able to hire, fire and manage via the Internet.

None of this is to idealize the world of physical offices, so easily skewered by the likes of Scott Adams’s Dilbert. And complaining about neck pain, or bosses constantly “checking in” online, might ring hollow to medical staff and delivery drivers who are on the frontlines. But given remote work is now such a critical lifeline for the economy, it would be a shame to let the current experiment fail as others have before. Choosing between your job and your health is a grim trade-off, and one that really shouldn’t exist in a pandemic like this one.

To contact the author of this story: Lionel Laurent at [email protected].