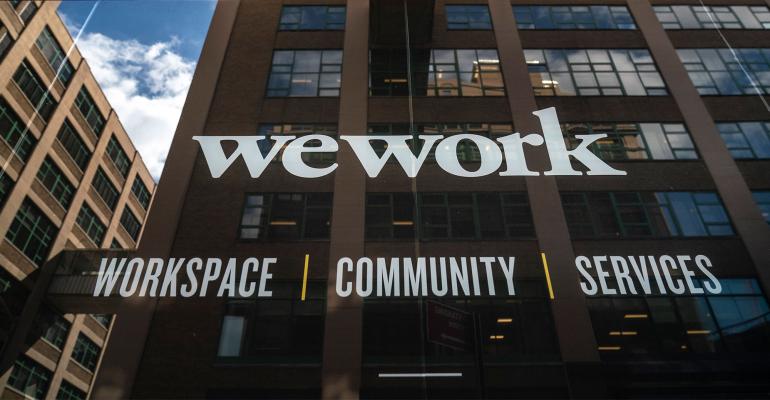 WeWork Is Finally Going Public. Will SoftBank Ever Make Its $17 Billion Back?

SoftBank will finally get a chance to start recouping some of its money when WeWork lists is shares on the New York Stock Exchange.

(Bloomberg)—In venture capital, the first investment in a startup is almost always the most lucrative. Not so for SoftBank Group Corp.’s investment in WeWork. In that case, SoftBank’s best deal was its last.

It’s an unusual culmination of a strange and sometimes-tortured partnership between the two companies. SoftBank will finally get a chance to start recouping some of the more than $17 billion it poured into WeWork when the company lists its shares on the New York Stock Exchange as soon as this week.

The web of share purchases, convertible loans, warrants, tender offers and letters of credit (some renegotiated) make it difficult for analysts to tell whether, or how, SoftBank could ever turn a profit on its investment. Representatives for WeWork and SoftBank declined to comment.

After so much went wrong, a lot would need to go right for SoftBank to make money on the startup. WeWork would need to capture a large portion of the post-pandemic workforce and hope that flexible offices take the place of many corporate campuses and home workstations, said David Gibson, chief investment advisor at Astris Advisory Japan. It would need to dramatically improve its financial position, too. Still, “it’s possible,” Gibson said.

Victory for SoftBank could simply mean breaking even, said Alex Snyder, a portfolio manager at CenterSquare Investment Management, a real estate-focused investor that doesn’t hold shares in WeWork, SoftBank or their rivals. “Coming out, more or less, whole—given the WeWork saga—could be a win in people’s minds,” he said.

The saga began in 2010, when Adam Neumann co-created a co-working space in New York. Investors lined up behind him, drawn to his infectious optimism and large ambitions. Masayoshi Son, the founder of SoftBank, became one of them in 2017 with an initial outlay of $4.4 billion in a deal valuing WeWork at $20 billion. In January 2019, SoftBank pushed the valuation to $47 billion.

An attempt to sell an initial public offering later that year was a disaster. Wall Street rejected the proposed valuation, the ballooning losses and Neumann’s apparent conflicts of interest, including questionable transactions and loans he took from the business. Neumann was ousted, WeWork almost went broke and SoftBank bailed the company out with more than $5 billion in new financing.

SoftBank’s choice to save WeWork, rather than let it collapse as SoftBank would later do with Katerra Inc. and Greensill Capital, is noteworthy. SoftBank was on the hook for a $1.5 billion warrant it had already promised WeWork. Son told investors two years ago that he looked into getting out of it but couldn’t extract SoftBank from the commitment. So he piled more cash into the beleaguered company, including $5.05 billion in debt and guarantees and a $1.5 billion settlement that reworked a tender offer to purchase shares from Neumann and others.

At that point, SoftBank also negotiated a better deal. WeWork agreed to reduce the price of shares tied to the previously promised warrant to $11.60 apiece, from $110. And as part of a $1.75 billion credit guarantee and $2.2 billion in senior unsecured debt, SoftBank got the right to buy shares at 1 cent each. Earlier this year, it bought 130 million shares at a penny each.  It gets 40 million more of those penny warrants when WeWork lists and another 12 million if the letter of credit is extended in 2023.

WeWork will start trading at about $10. Assuming the company eventually pays back the debt, SoftBank’s gain on those warrants could be substantial—far in excess of any of its other investments in WeWork.

The public valuation for WeWork will be about $9 billion, less than a fifth of what SoftBank paid in 2019. But because of accounting  conventions, SoftBank will essentially start with a clean slate. WeWork’s lowest point, according to SoftBank disclosures, was in early 2020—after the botched IPO and at the beginning of the Covid-19 pandemic. For the quarter ending in March 2020, SoftBank assigned WeWork a valuation of $2.9 billion, and SoftBank shareholders reacted accordingly.

“To some degree, they’re starting over,” said Snyder. “They get carte blanche.”

In reality, though, SoftBank is deep in a hole. The company and its Vision Fund put $16.9 billion into WeWork, in equity and debt. That doesn’t include a $430 million personal loan to Neumann or $105 million in other payments to Neumann, but it does include $3.85 billion that WeWork hasn’t tapped—the $1.75 billion credit guarantee and $1.1 billion in senior secured debt.

If WeWork performs as outlined by its executives, it could hit $1 billion in earnings before interest and other expenses by 2023. If the market starts valuing the company in line with other franchised businesses such as hotels, then the company could conceivably hit a valuation north of $15 billion by 2023. At that point, SoftBank, which will have a roughly 56% ownership stake after the listing, will be getting closer to break even.

Of course, that’s counting on perfect execution. WeWork’s business model remains unproven, said Aswath Damodaran, a professor of finance at New York University’s Stern School of Business. Its substantial long-term rent commitments and short-term tenant contracts muddy the prospects for the company to turn a profit. “SoftBank will not make money on WeWork,” Damodaran wrote in an email. “The unanswered question is how much they will lose.”

--With assistance from Miles Weiss.

To contact the author of this story: Sarah McBride in San Francisco at [email protected]