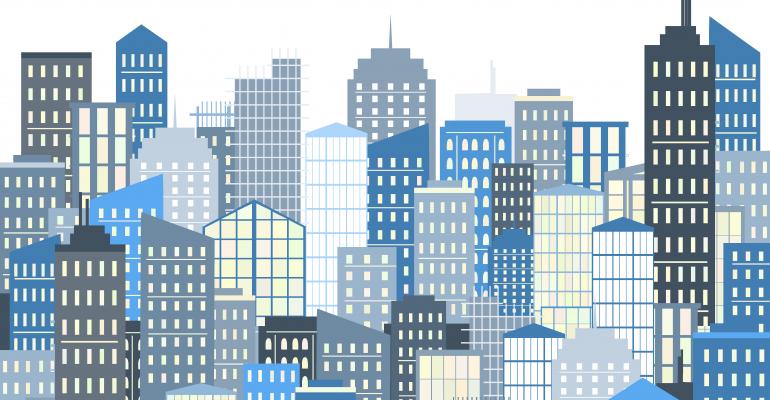 In addition, rents continued to grow, with overall asking rents rising 5.1 percent over the second quarter of 2018, to $34.28 per sq. ft. Vacancy in downtown areas remained stable at 10.4 percent, while suburban market vacancy declined for the fifth consecutive quarter to 13.2 percent due to high demand and little new construction.

Growth in the office sector is expected to slow slightly, but Philadelphia-based Ian Anderson, senior director of research, head of Americas office and U.S. divisional thought leadership with CBRE, says the firm’s outlook for the office market is more optimistic than it had been a year ago. Office employment has grown at a consistent rate of approximately 2.0 percent annually for the last several years.

Projects recently delivered or underway in lower Manhattan, for example, include 13.4 million sq. ft., most of which has been preleased or is build-to-suit. And of the 5.1 million sq. ft. of office space under construction in San Francisco, 3.3 million sq. ft., or 66 percent, is pre-leased, according to CBRE data.

The Washington, D.C. metro, on the other hand, has a significant construction pipeline in spite of vacancy averaging 16.2 percent. In the second quarter, 1.3 million sq. ft. of new space was delivered, and another 9.2 million sq. ft. is underway, according to a second quarter office report from Newmark Knight Frank.

This dynamic is the result of tenants’ demand and willingness to pay for new space with more amenities, according to Alexander (Sandy) Paul, D.C.-based senior managing director of national market research with Newmark Knight Frank. He adds that tenants are typically saving on overall occupancy costs because they are pairing a move to new offices with downsizing the amount of space they lease.

The movement of tenants from older buildings, however, has created high vacancy in class A-minus and B-plus buildings, while non-profits and associations on a budget are keeping vacancy down in well-located, class-B assets, according to Anderson.

Meanwhile, technology firms continue to be the single biggest occupancy driver, representing 22 percent of all leasing activity in the second quarter, he notes. “As much as growth is broad, there is noticeably unusual growth in a few tech markets,” Anderson adds, citing as examples Seattle, the San Francisco Bay Area and Austin, Texas, which are among top 10 metros for highest office space absorption. “These cities are always ahead of the pack, but this cycle they’re very far ahead.”

For example, Austin’s overall vacancy rate at 9.9 percent is remarkable, according to Paul, when considering its development-friendly environment. He suggests that low vacancy is a direct result of “UT minting lots of new graduates with tech skills.”

Other secondary markets getting a boost from tech expansion include Nashville, Tenn., Pittsburgh, Denver and Atlanta. He says that Nashville, for instance, is benefiting from Amazon establishing an operations center there, which ultimately will create 5,000 new jobs. Pittsburgh is on the tech radar screen because Carnegie-Mellon produces more computer science graduates than UC Berkley and Stanford combined. Paul adds that there is also a significant wage differential between these two markets.

The average wage for a tech professional in Pittsburgh is nearly $31,600 less than in San Francisco, $57,126 compared to $88,697, respectively, according to Payscale.com.