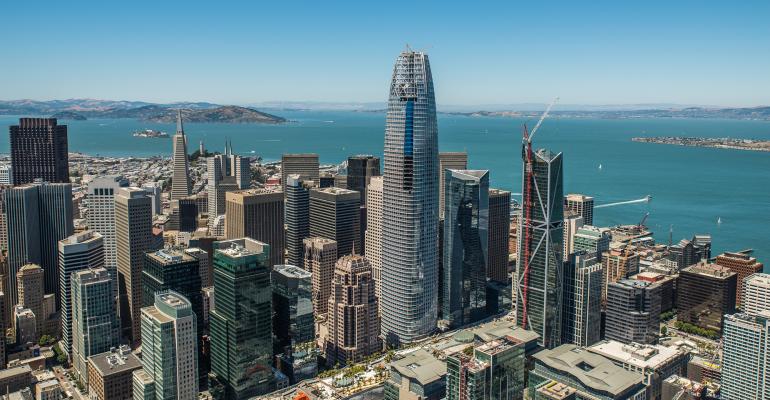 The city’s office vacancy rate reached 16.7 percent at the end of 2020, up 11 percentage points from a year ago.

(Bloomberg)—San Francisco’s office market is being hit so hard by the pandemic that, by some measures, it’s worse than the global financial crisis or dot-com collapse.

The city’s office-vacancy rate reached 16.7% at the end of 2020, up 11 percentage points from a year prior, according to a report from commercial real estate brokerage Cushman & Wakefield. That’s a higher level than in the aftermath of the 2008 recession.

The vacancy rate is being driven by a record amount of sublease space, which has surpassed the worst of the dot-com bust two decades ago, said Robert Sammons, senior director of research at Cushman in San Francisco. In addition, new leasing has effectively been on pause and hit the lowest annual level in 2020 since at least the early 1990s.

Companies have been reevaluating their office needs after months of pandemic lockdowns showed them that it was possible to function with employees working from home. That’s caused a spike in vacancies, especially in cities like New York and San Francisco, where the cost of renting space is higher.

The technology companies that dominate the Bay Area, in particular, have embraced remote work. Pinterest Inc. last year paid almost $90 million to cancel a large San Francisco office lease, saying it is rethinking where employees are based. Oracle Corp. and Hewlett Packard Enterprise Co. are relocating their headquarters from Silicon Valley to Texas, the latest in a string of departures from the pricey region.

While a recovery in the San Francisco office market will hinge on more people getting vaccines and employees returning to the office, Sammons said there are early signs of a rebound. Some of Cushman’s clients have indicated they plan to pull sublease space they put on the market, he said. Employment in industries that typically have workers in an office has been gaining back ground since a plunge in early 2020 and venture investment in tech companies remains strong.

“We’re certainly going to be a major base, if not the major base for tech, for the foreseeable future,” he said.