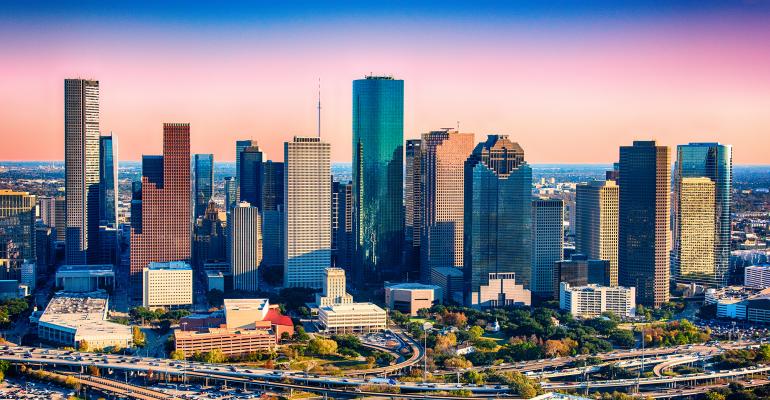 Houston ended 2020 with a 24 percent office vacancy rate, the highest of any major U.S. city, according to JLL.

(Bloomberg)—For all the talk of workers fleeing pricey coastal cities such as New York and San Francisco, one of the most troubled spots in the U.S. commercial real estate market is deep in the heart of Texas.

Houston ended last year with a 24% office-vacancy rate, the highest of any major U.S. city, according to Jones Lang LaSalle Inc. After years of construction to accommodate an oil boom that’s now gone bust, buildings are sitting empty, values are plunging and mortgage defaults are piling up.

The Covid-19 pandemic is only accelerating the real estate distress in America’s energy capital. Office tenants vacated a net 3.2 million square feet (300,000 square meters) last year, and there’s 3.1 million square feet of new top-tier space set to be completed over the next 18 months. That means it will take more than a vaccine to fill properties.

“Houston unfortunately has been hit by a double Black Swan event,” said Russell Ingrum, senior partner of the Texas capital markets group at CBRE Group Inc. It’s “not only Covid, but what happened with the price of oil.”

The fourth-largest U.S. city is in the midst of a yearslong shift after back-to-back oil busts wiped out tens of thousands of jobs and pushed scores of companies into bankruptcy. On Tuesday, giant Exxon Mobil Corp. -- which houses the core of its North American workforce in the Houston suburb of Spring -- reported its first annual loss in at least 40 years. President Joe Biden is pushing policies to combat climate change that may further dim the outlook for oil, while Wall Street investing titans such as BlackRock Inc.’s Larry Fink are demanding companies cut carbon emissions or face exclusion from some fund portfolios.

Those trends are leading Houston office prices to plunge, particularly for the shiny towers on the city’s west side, known as the energy corridor. Consider Two Westlake Park, a two-tower campus in the area, that was valued at $124 million in 2014, when it hosted offices for ConocoPhillips and BP Plc. It sold in December for $19.25 million -- an 84% drop in value.

Across the metropolitan area, the dollar value of office building sales tumbled 63% last year, compared with a 40% decline nationally, according to Real Capital Analytics Inc. Houston now ranks No. 1 in its share of offices with 30-day delinquencies among commercial mortgage-backed securities and is near the top for properties on CMBS watchlists or repossessed by banks, Bloomberg data show.

The city’s troubles contrast with a boom in the state capital of Austin, which is benefiting from a surge of technology industry workers and the relocation of California companies such as Oracle Corp. Dallas, meanwhile, has a more diversified economy that has fueled demand for space, Ingrum said.

“The entire Texas story is built around growth,” Ingrum said. “While Houston isn’t just an energy town, on the margin it does drive its growth.”

The plunge in oil prices in 2014 and again in 2020 upended a speculative construction boom in Houston, said Patrick Jankowski, senior vice president for research at the Greater Houston Partnership. Employment in upstream energy industries -- exploration, service, equipment and engineering -- shrank by 30%, or 90,000 jobs, over the past six years.

“It was a bit of a bubble in 2014,” Jankowski said. “As the energy sector let go of space, it was hard to offset that loss.”

Houston boosters see a glass half full, noting that today’s issues pale compared with the 1980s, when an oil bust combined with the savings and loan crisis left the city with a near 50% office-vacancy rate.

The area has also seen an influx of companies, with Silicon Valley’s Hewlett Packard Enterprise Co. planning to relocate to a Houston suburb. Home sales set records for pricing and volume in 2020, according to the Houston Association of Realtors.

“There’s no denying” that the office-space market is feeling the impact of the most recent oil bust, said Bob Eury, president of the Houston Downtown Management District, a redevelopment agency created by state lawmakers 25 years ago. Still, the vacancy rate may not provide a clear picture of demand because it groups together a broad range of offices across a sprawling metro area, he said.

Demand for “new, state-of-the-art properties” is robust, Eury said. In the downtown area, $1.9 billion in new office, residential and other construction and development projects are underway, according to district data.

The city’s vast amount of space means tenants will get to decide the value of location and amenities for their workforce in a post-pandemic world.