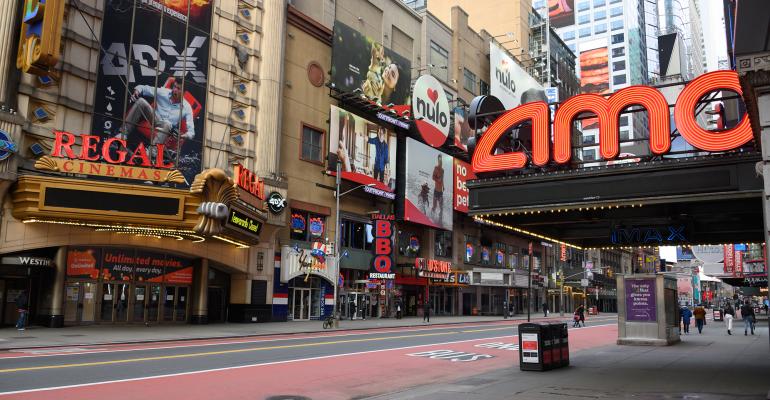 Their argument: It’s safe, and the eateries and shops that make Manhattan special can’t hold out much longer.

(Bloomberg)—The skyscrapers are mostly empty, the tourists are home and talk of New York’s decay is back. For the city’s real-estate barons, it’s time to put an end to it.

A loose coalition of New York’s top property owners and managers is busily working the phones, pressing many of the city’s biggest employers -- including powerhouses like Goldman Sachs, Blackstone and BlackRock -- to speed up the return of workers. Their argument: It’s safe, and the eateries and shops that make Manhattan special can’t hold out much longer. Some are calling it the patriotic thing to do. It would certainly help hard-pressed landlords.

“I’ve been really pushing the CEOs to bring people back into the office,” said Jeff Blau, the head of Related Cos., the developer behind the Hudson Yards project. “I’ve been using a little bit of guilt trip and a little bit of coaxing.”

The reaction for now has been lukewarm.

Behind the desperation lies fear of a vicious spiral. The longer commuters stay home, the more local businesses will disappear, and the less reason there is for anyone to return. Executives and firms who’ve made a fortune developing and owning the city’s towers are facing the prospect of a significant slump in demand and prices for offices and residential units. But the ramifications extend to all New Yorkers, Blau said.

“I am watching the city decay as nobody is here,” he said. “Now is not the time to abandon the city and expect it to be in the same way you wanted it when you get back in a year from now.”

Blau and his peers have been taking turns getting on the horn with chief executives and their lieutenants in charge of overseeing vast tracts of offices. The group includes RXR Realty’s Scott Rechler, Rudin Management’s William Rudin and Marc Holliday of SL Green Realty, New York’s biggest office landlord.

“We’re creating our own fate by not bringing people back and restarting the largest economic engine in the country,” said Rechler, whose RXR Realty controls 25.5 million square feet of commercial real estate -- roughly equivalent to 10 Empire State Buildings. “It’s as much of a civic obligation as anything else.”

Beyond the financial industry, the landlords are also calling on giant law firms and even the outposts of tech behemoths such as Microsoft and others. In many cases, they’re promising to make any necessary changes to ensure buildings are safe. Others are urging city officials to address rising crime rates and homelessness. Members of the group have also targeted the governor’s office and an influential coalition of top New York companies to start a “Get Back to Business” campaign.

Yet for large employers a return to the office can present unnecessary risk. They figured out months ago how to thrive even with most of their employees logging on from home while waiting for a vaccine. Many workers are reluctant to brave buses, subways and elevators, or they have few options for child care. Some New Yorkers even suggest a dip in property prices wouldn’t be all bad.

A key part of the landlords’ pitch is that every office job supports several service workers. So while big companies may survive, the legions of restaurants, retailers and other small businesses around their buildings will face bankruptcy, leaving blight. That, in turn, would hurt the ability of employers to lure top talent to the city.

Office values have so far held up, and some companies have signed new, high-profile leases to expand in the city. Tech giants such as Facebook, Amazon and Google’s Alphabet that committed in recent years to grow in New York have yet to signal any retreat. The concern is, will it last?

“The CEOs of several companies I’ve talked to have mentioned that it’s a patriotic duty to have their people come back to the office,” said Rudin.

New York was hit harder by the pandemic than any other U.S. metropolis, and its residents have broadly embraced strict social distancing to prevent further deaths. Their resolve was buttressed when other parts of the country tried to reopen, only to see infections surge.

Only about a quarter of workers at the 146 major employers in the city are expected back by year-end, and roughly half by next summer, according to a survey. But SL Green’s Holliday, who has personally spoken with more than 100 tenants, predicts the return to Manhattan will speed up after Labor Day with many employers bringing in roughly a third to half of their staff.

Real estate companies are already heading back. They’ve recalled half their workers and expect almost all of the rest to return by next July. In June, Rechler posted a photo of himself on Twitter in a mostly empty New York subway car, saying it felt “incredibly safe and clean.” At SL Green and Related, almost everyone who can come back, is back.

“This place is a pain in the a--,” Related’s Blau said. “It’s crowded and it’s not the easiest place to live. But you make that trade because it’s got so many great things,” like restaurants, culture, the arts and nightlife.

“We want to make sure that it stays that way and people continue to make that trade and have those things to come back to,” he said.

--With assistance from Patrick Clark and Craig Giammona.

To contact the reporters on this story: Sridhar Natarajan in New York at [email protected];