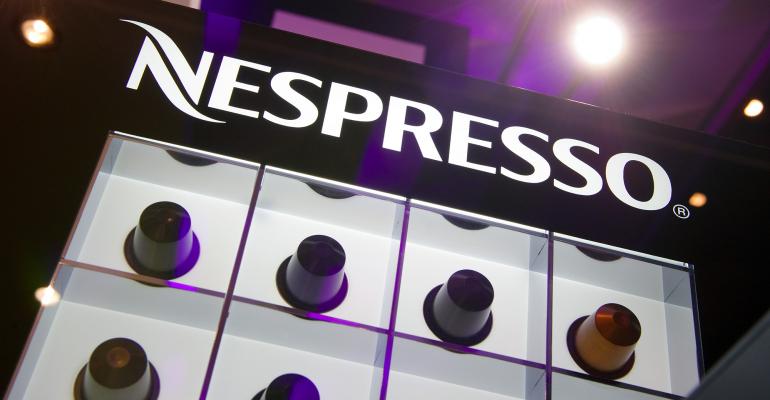 Nestle Has Its Starbucks Moment as People Eye Office Return

The contactless machines can be controlled via smartphone and are being distributed globally.

(Bloomberg) -- Nestle SA wants to get in on the back-to-office push with new Nespresso machines for Covid-protected workplaces, without turning its back on coffee drinkers who’ve grown attached to their home devices during months of lockdowns.

The maker of Nespresso and Nescafe is set to reassure virus-wary office workers with a new generation of touchless coffee machines, while a rollout of new products seeks to win over those looking to spice up their at-home coffee consumption.

The contactless machines can be controlled via smartphone and are being distributed globally, with introductions in Russia and China in coming weeks, David Rennie, head of Nestle’s coffee brands, said in an interview.

“As people return to offices, they may not be going back in the same numbers as pre-Covid,” Rennie said by phone. “In-home consumption will continue to grow.”

Coffee was one of the motors of Nestle’s sales growth last year and makes up the bulk of the company’s $24 billion beverage business. Following a lukewarm introduction of Nespresso in the late 2000s, Nestle has made some bolder steps to boost its U.S. coffee business in recent years. The company splurged $7.15 billion on a partnership with Starbucks in 2018, and now Nestle makes the coffee chain’s products for at-home use worldwide.

That was a boon during the pandemic, when consumers were more likely to use Starbucks capsules in a Nespresso machine than take a walk to a cafe. As vaccination drives bring the prospect of post-pandemic life in view, Nestle is eyeing opportunities to expand in offices while trying to keep stoking at-home demand with new capsules and types of soluble coffee.

Rennie said he sees big growth prospects in China, where average consumption of java is at just seven cups per person a year. Nestle opened almost 900 Starbucks counter locations in China last year as the country recovered from lockdowns faster than other countries. India and Africa are also priority markets for expansion, he said.

The U.S. overtook France as Nespresso’s biggest market last year, and Rennie considers there’s still room for growth there as capsules and soluble coffee become increasingly in vogue. Cold and flavored coffee will be a focus there in 2021, with iced tropical coconut coffee and other flavors being introduced.

“The good thing about the U.S. market is that it’s very big,” said Rennie, who was promoted to Nestle’s executive board this month in a sign of coffee’s importance at the Vevey-based food company. “We’re still a relative newcomer there.”

In 2014, the Swiss company introduced a new version of Nespresso machines called Vertuoline that can make bigger coffees for American consumers. That may have given them a taste for dainty espresso shots as well: Nespresso-brand pods surpassed Keurig’s Green Mountain to claim a No. 2 position last year, according to Euromonitor. The top brand is the Starbucks capsules that are made by Nestle.

While Nespresso boutiques will remain a key part of the brand’s strategy, the increased importance of e-commerce means the company will look at optimizing its store network, which currently counts 816 boutiques in 76 countries, Rennie said.

The company sees the global coffee market growing 4% to 5% by value in the next few years as people gradually return to office and to their old coffee drinking habits, Rennie said. That means green coffee needs could expand 2% by volume. Nestle’s own coffee sales rose 5% last year, adjusted for acquisitions and currency shifts.

There’s steady growth in coffee, though the out-of-home segment could take two to three years to return to pre-Covid levels, Rennie said. For the global coffee market, “the challenge is making sure that demand and supply are kept in balance and we expect they will be balanced.”

The forecast comes as coffee supply tightens. Arabica futures reached the highest level in more than a year last month. Production of arabica beans by top exporter Brazil is expected to drop by about a third in the 2021-22 season amid dry weather, adding to lower-than-expected output forecasts from Central America.

While there has been a rise in stockpiling of agricultural commodities by governments and companies to avoid potential supply chain disruptions due to Covid-19, Nestle said it hasn’t had to do much stockpiling for finished coffee products due to robust demand.

“As we come out of this year, demand will rebalance a bit,” Rennie said. “But we see continued strong demand for coffee overall.”