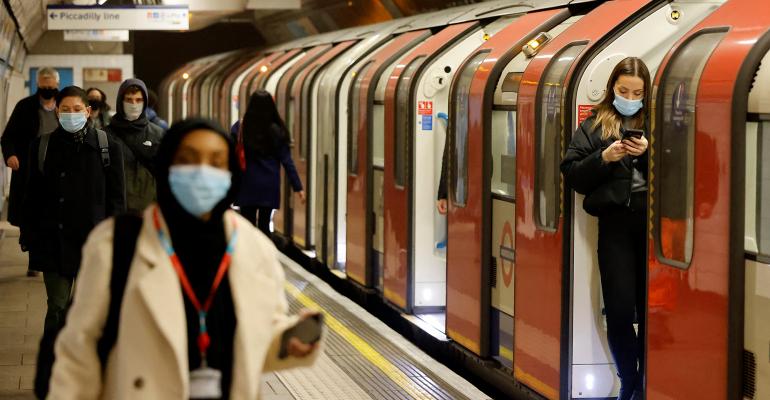 London Gets Back to the Office, But Bankers Drag Their Heels

The latest figures show a gradual rebound in London’s subway system ridership as companies encourage workers to come back to the office.

(Bloomberg)—London’s subway system maintained a gradual increase in ridership, showing progress in the campaign to lure workers back to the office -- though the financial center continues to lag.

As of 10 a.m. Monday, tube entries and exits were up 6% from a week earlier, Transport for London said in an email. Usage levels stood at 45% of normal, though the figure reached only 31% in and around the City of London financial district and Canary Wharf.

The latest figures show a gradual rebound in ridership as the U.K. scraps work-from-home regulations and companies encourage workers back into the office. For all of last week, tube journeys stood at about half of pre-pandemic levels, while bus ridership was at 70%, TfL said.

Prime Minister Boris Johnson’s government has cut back on restrictions and mask mandates as the U.K. starts to treat the virus as endemic after almost two years of start-stop measures and restrictions. Companies including JPMorgan Chase & Co., Goldman Sachs Group Inc. and Citigroup Inc. are encouraging staff to get back to their desks.

Because of construction, the busy Northern Line isn’t stopping at Bank station through May. This could be affecting tube traffic in City of London, as commuters use alternatives like cabs, buses or Uber.

Prior to the introduction of the latest remote work rules in December, Transport for London said it was regularly seeing more than 60% of normal demand on weekdays but as high as 80% on weekends.

The number of workers at their desks in the City last week was 40% below levels before the pandemic, according to data compiled by Google, which tracks the location of its users. It was as much as 52% below the baseline a week earlier.

People are no longer being asked to work from home, and rules requiring mask-wearing in shops and on public transport will be dropped from Jan. 27 -- although coverings will still be required on the TfL network. Mandatory Covid passes for businesses will also end this week.

The government has also loosened travel rules as part of the campaign.

--With assistance from Neil Callanan.