Built in 1929 as a luxury department store on Wilshire Blvd. near Vermont Ave., this Art Deco icon attracted many famous shoppers in its day, including Clark Gable, Carole Lombard, Greta Garbo, Walt Disney, Mae West, Marlene Dietrich, Alfred Hitchcock and John Wayne. Today the building—known as both the I. Magnun/Bullocks and Bullocks/Wilshire—is part of the Southwest Law School. Although the final scene of the film “Ghostbusters” was shot on top of it in the early 1980s, that’s far from the building’s only claim to haunting fame. According to the website Paranomalistics, there’s a rumor that, back in the 1930s, a man pushed a young girl into the elevator shaft, letting her fall to her death. During the law school renovations, a security guard working reported hearing a girl crying in the elevator shaft. Also during the renovation, construction workers reported finding secret passageways leading from the late owner John G. Bullock’s penthouse to various parts of the building. Other oddities reported included lights turning on and off by themselves, windows and shades opening and closing on their own and footsteps heard on the stairway. And several construction workers actually resigned after being spooked by unexplained occurrences in the building’s clock tower.

It’s believed that Los Angeles City Hall once housed a morgue, which may be what’s behind the building’s creepy reputation. According to security officers working the night shift, the building’s second, third, fourth, 27th and 28th floors are haunted, with the second floor—made entirely of marble—named as the most frightening. There, reports the website Paranormalistics, noises come from many directions, it always feels like someone is watching you and many apparitions have been seen. On the third and fourth floors, visitors report that it always feels like someone is walking along beside them. In the 27th floor’s Tom Bradley Room, which features portraits of all of Los Angeles’ former mayors, there is said to be one very eerie painting, located in the back hallway. The painting, completed in the late 1800s to early 1900s, looks like a photograph, and the man portrayed seems to watch onlookers with his eyes. On the 28th floor, CCTV cameras have picked up the images of human figures.

The Empire State Building is said to be haunted by Evelyn McHale, who became known around the world in her day as “the most beautiful suicide.” On May 1, 1947, McHale, 23, jumped from the top of the building and landed on an unoccupied United Nations limousine parked 1,050 ft. below, crushing its roof, shattering its windows and understandably horrifying passersby. One of those pedestrians happened to be photography student Robert Wiles, who snapped a photo of McHale’s serene, beautiful corpse—her fingers still clutching her pearl necklace— just minutes after her death. Wiles’ shocking photo was published in the May 12, 1947 issue of Life magazine, and subsequently ran in newspapers around the world—as well as inspired Andy Warhol’s Suicide (Fallen Body) serigraph in his Death and Disaster series. According to McHale’s suicide note, found at the scene, she leapt to her death because she didn’t think she was fit to be a wife. “He is much better off without me,” she wrote. “I don’t think I would make a good wife for anybody.” Her fiancé, Barry Rhodes, an ex-GI studying in Lafayette, Pa., whom she was set to marry in June, told reporters “when I kissed her goodbye she was happy and as normal as any girl about to be married.” Today, some people believe McHale haunts the Empire State Building. Visitors to the observation deck on the 86th floor have reported a young woman wearing bright red lipstick, dressed in 1940s clothing, pacing and crying, then rushing through the safety net and jumping. Others say the woman tells her husband died in Germany during the war and that she can’t imagine life without him, then jumps and reappears in another part of the deck to reenact the same scene. Ghost Study even offers one visitor’s photos of a strange white cloud leaping from the deck.

When the New York State Education Building’s basement was being built in 1910, an Italian stonemason, working in the construction area stumbled and fell into the space where other stoneworkers were pouring cement. The foreman, said to be an Irishman who didn’t like Italians, especially clumsy ones, allegedly called out the now famous phrase, “Keep pouring.” So pour they did, causing the Italian stonemason’s horrific end. Today, the building’s basement archive is known by employees as “the dungeon,” and the unfortunate stonemason’s ghost, known as Jason, is the most famous spirit in Albany, a city that's renowned for paranormal activity. But whether Jason is a friendly ghost or an ominous one is a matter upon which employees can’t seem to agree. Some have reported feeling chilly and unwelcome upon entering the dungeon. Others say Jason will find books for them and even open them up to the sought-after pages.

On July 23, 1915, Chicago-based Western Electric Co., chartered four ships to take its more than 10,000 employees and their families to its annual company picnic in Michigan City, Ind. One of the ships, the rusty Eastland, had a history of balance problems, unbeknownst to the more than 3,200 people who boarded it. Since its christening in 1903, it had nearly capsized several times. As the ship pulled out of port, passengers rushed to the already top-heavy upper deck to view the city, and water rushed in its windows and doors. In less than 15 minutes, the Eastland was resting on its port side in less than 20 ft. of water, entombing hundreds of people. Throughout that night, rescuers transported the 844 corpses—including more than 20 complete families—to a makeshift morgue at the 2nd Regiment Armory on West Washington Ave. In the 1980s, the Armory facilities were renovated and reopened as Harpo Studios, and Oprah and her team have been haunted ever since. Employees, and Oprah herself, report seeing an affable shadowy figure, "the Grey Lady," supposedly one of the mothers who drowned on the Chicago River—and claim the ghost has even been caught on security cameras. Workers also report doors slamming without reason, phantom old-time music, unexplained footsteps and disembodied voices like children laughing, people sobbing and screaming for help. Not surprisingly, nobody wants to work late. And today, pedestrians crossing the Clark Street Bridge between Clark and LaSalle Streets, where the Eastland tragedy took place, report hearing moans and screams. The tragedy claimed three times the lives than the historic Chicago Fire, making it one of America’s worst maritime accidents on record...and one of the least talked about.

In 1979 two traders got into such a violent fight over a trade that they took it outside to duke it out near the horse statue fountain. One man was so badly hurt that he died before paramedics could get him to the hospital. Cleaning crews at night report the sounds of arguing men when there is no one around.

This triangular 1928 office tower was nicknamed "the Coyote" because its front resembles a coyote howling at the moon. A few years ago it was investigated by one of its office tenants, finance industry professional Matt Libman, and his sideline operation, the Second City Paranormal Research Co. Aside from its randomly sealed doors and overall creepy feeling, the building features a shadowy figure (caught on tape) and strange voices. On the rooftop during his investigation, Libman recorded a voice saying the word "ladder" repeatedly. Check out Libman's footage on YouTube.

As the legend goes, a long-ago chief machinist was once beheaded here by a disgruntled employee. Employees report hearing "Jeez, I'm the chief," coming from one of the offices whenever they're working late at night.

When a boiler exploded in 1895, most of this building was destroyed and 37 of its inhabitants killed. The remaining original structure burned down. Notably, the building engineer was not one of the 37 people that died. It was assumed he was not at his post at the time of the explosion, and he was arrested.

The Bradbury Building, at 304 Broadway at West 3rd Street in downtown Los Angeles, currently home to many businesses as well as the L.A. Police Department’s Office of Internal Affairs, is said to have a spirit or two dwelling in its basement. But that’s hardly surprising, given that the design of this landmark building was partly the work of an actual ghost. Yes, that’s right. In 1893, Lewis L. Bradbury grew impatient with local architect Sumner Hunt, so he offered the commission to Hunt’s $5-per-week draftsman George Wyman, age 32, instead. Not being an architect, Wyman was understandably nervous, so he and his wife consulted his late younger brother Mark, who had died six years earlier, using a planchette with a pencil attached. Paranormal experts believe that the heart-shaped, wooden planchette can be activated from beyond the grave. According to Wyman, the planchette spelled out, “Take Bradbury Building. It will make you famous.” Though the word “Bradbury” was written upside down, Wyman took his brother’s advice and created the renowned Bradbury Building—an Italian Renaissance structure with an interior that is one of the most magnificent architectural office designs in the world—and has been used as a setting for many films, including “The Artist and “Blade Runner.”

This building is considered one of the most haunted places in Kentucky. It’s an 11-story Art Deco building completed in 1936, and currently houses 1,200 state government employees, including the Kentucky Revenue Department, Personnel Cabinet and Commonwealth Office of Technology. Since it’s built on the site of a state penitentiary, and was thoroughly renovated in 2005-2007, its haunted reputation is not surprising (ghosts do not like change), and it’s a popular site for ghost hunting. According to Urban Legends writer Jojo King of Pikeville, Ky., who is the offspring of a longtime employee there, workers in the building say they have been touched, heard voices and seen shadows. Jojo’s dad’s once ran to catch the elevator when he saw someone go in and the doors closed behind that person. When Jojo’s dad pushed the elevator button, the doors reopened, there was no one there. He also said a coworker told him that one night, while working late, she thought she heard someone in another cubicle, called out, “Hello, is anyone there?” but got no answer. Later she heard further noises from the cubicle, like someone rustling through stacks of paper, and footsteps. She ran from the building immediately. Since then, writes Jojo, none of the workers stay late.

In 1853, Michael Bissman brought his young family to Mansfield, Ohio, from Harmandarmstardt, Germany. His son, Peter Bissman, grew up to be Mansfield's tycoon, distributing wholesale groceries, coffee, tobacco, hand-rolled cigars and alcohol. Peter built the 5,000-sq.-ft. Romanesque and Romantic Gothic-style Bissman Building to house the offices and warehouse of his business in 1886 using Hancock & Dow, the same contractors who built the Ohio State Reformatory and Mansfield’s Hancock & Dow Building. The building remained in use for the business until the 1970s, and featured in the film “The Shawshank Redemption.” Today, the Bissman Building remains in excellent condition and continues to tower over downtown Mansfield. It is now home to Pirate Printing, a successful printing and embroidery business owned by the Bissman family—as well as a popular ghost-hunting venue that’s been featured on several TV shows on the paranormal, including My Ghost Stories and Ghost Hunters. In the late 1800s, the building was the last place seen by a little girl called Ruthie, whose photograph still sits on a fireplace mantle in the building, who was raped, murdered and stuffed into a pickle barrel in the basement. When the employee who was suspected of killing her was asked to leave the building, the elevator malfunctioned, decapitating him. The Bissman family believes that Ruthie had her revenge then, but both she and her murderer haunt the building, and the man’s angry spirit has come to be feared. 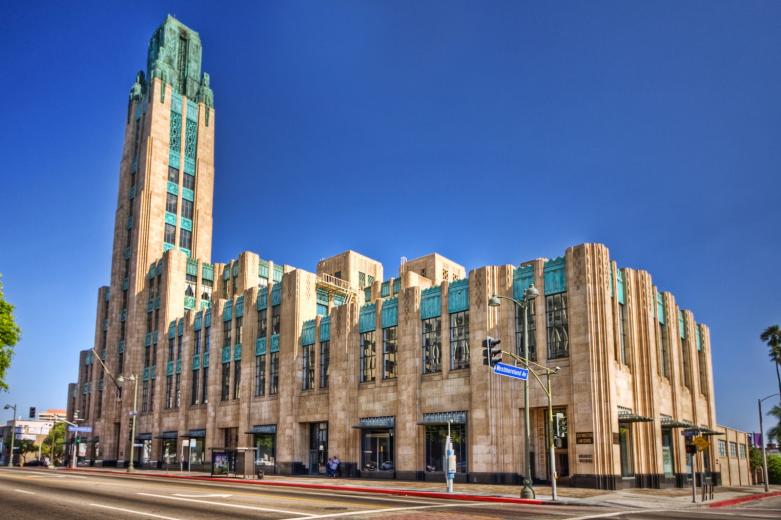