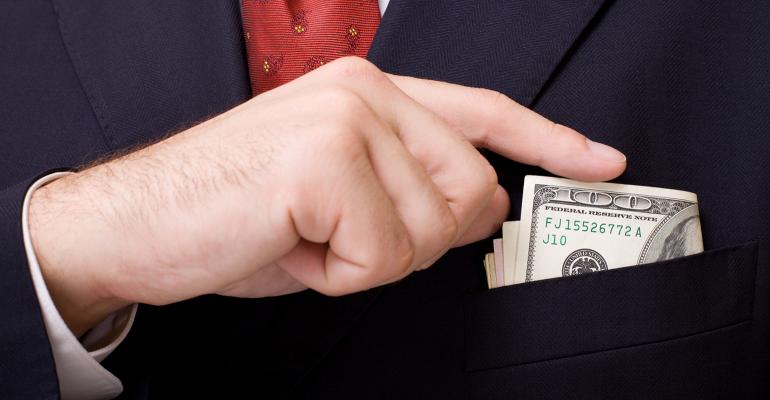 Why Money Managers Are Paid So Much Is a Mystery

There might be lots of reasons, but market-beating performance isn't one of them.

(Bloomberg View) --Why do workers in the financial industry get paid so much? There are many possible explanations, none of them completely satisfying. The financial industry commands a much larger share of the U.S. economy than in the past, causing some to worry that the industry gets more money than its economic contributions merit. The question is also important to workers thinking of going into finance, but for a different reason: Everyone wants to know how to get the big bucks.

The really big bucks, of course, go to people who start successful fund companies -- titans such as Ray Dalio of Bridgewater Associates or Ken Griffin of Citadel LLC. But well below those lofty heights, there are many thousands of people making a comfortable living doing things like managing mutual funds.

The mutual-fund industry, to put it mildly, is big: What are all those people getting paid to do? One possible answer is that they’re getting paid to earn market-beating returns. If you just want to do an average job, you don’t really need a trained investment professional to pick your assets -- just invest in an index fund. And if you want to beat the market, a mutual fund probably isn’t your best bet. While there is evidence that active managers do beat the market before fees are deducted, after fees they tend to underperform. That’s unsurprising, since mutual funds tend to be big, and beating the market gets much harder as the amount of assets under management increases.

Even if investors don’t realize how difficult it is to outsmart the market, mutual-fund companies seem to get it. New research indicates that a fund manager’s performance probably isn’t even that big of a factor in determining his or her pay.

A recent paper by economists Markus Ibert, Ron Kaniel, Stijn Van Nieuwerburgh and Roine Vestman looked at the mutual-fund industry in Sweden. Sweden has both a large, well-developed fund industry and highly detailed tax records. Ibert et al. connect managers with funds, and with families of funds, and try to figure out what accounts for the differences in their compensation.

Fund performance, they found, has a very weak relationship to manager pay. Managers’ returns vary a lot, as one might expect in an industry where performance is subject to the vagaries of the stock market. But the authors estimated that a one-standard-deviation increase in fund returns, relative to a benchmark, netted the manager only a 2.9 percent increase in compensation -- meaning that even very strong outperformance doesn’t get rewarded much at all.

Fund size, the authors found, is related to pay, but the relationship is again weaker than one might think -- on average, only about 15 percent of the fee revenue a fund gets from managing more assets gets passed through to the manager. And the relationship is even weaker for larger funds. Most of those enormous management fees are captured by mutual-fund companies, not by the people managing the funds.

So what do managers get paid for? Another recent paper, by Galit Ben Naim and Stanislav Sokolinski, offers one possible answer. Ben Naim and Sokolinski looked at Israeli mutual funds, using extremely comprehensive data collected by the Israeli government. Like Ibert et al., they found that market-beating performance was only weakly related to compensation -- a one-standard-deviation increase in the amount that a manager beats his or her benchmark meant only a 5 percent boost in pay, slightly better than what Ibert et al. found, but still pretty small.

Interestingly, Ben Naim and Sokolinski found that manager pay is more strongly related to overall fund performance, without the benchmark subtracted. That’s odd, because benchmarks are ostensibly just a bunch of things managers don’t really have control over, like the performance of the broader market.

Ben Naim and Sokolinski found a larger effect of fund size on manager pay -- about 30 percent, or roughly twice the size of what Ibert et al. found. Furthermore, they found that managers captured 40 percent of the fee revenue that comes from investors putting more money in the fund (rather than increases in size that come from market returns, or from the company handing the manager more assets to manage).

These findings suggest that mutual-fund managers are paid less for beating the market than for marketing -- i.e., the ability to collect assets. High passive returns, even if they aren’t due to skill, attract new investor money, which gets the company more management fees. And when more investor money comes in, managers get rewarded.

This bolsters the notion of “money doctors” -- the idea that managers mainly add value by building trust with investors. Investors are naturally wary about putting their money in stocks and other risky assets, and want a qualified professional to tell them it’s safe to do so. This could potentially be a win-win relationship; investors pay fees, but get higher returns than they would if they had stayed out of the market. Or it could be a potentially toxic relationship, if managers use personal or cultural affinity to sell investors on a bad deal. More research is needed in order to tell how many money doctors are really quacks.

But the new research into fund-manager pay also shows that a large percentage of compensation remains unexplained, having apparently little to do with fund size or returns. There is a lot of money sloshing around in the financial industry, and much of how it gets divvied up remains a mystery.