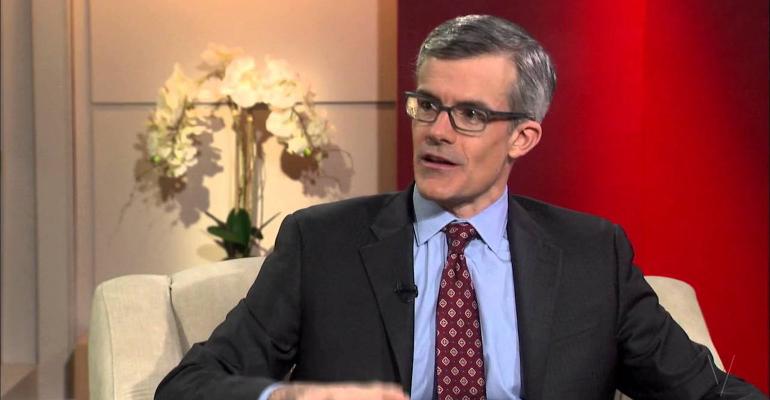 (Bloomberg Gadfly) --Jack Bogle launched Vanguard Group Inc. with little more than a college thesis. When Jack Brennan took over, the company had less than half of the assets of heavyweight Fidelity Investments. And even Bill McNabb, who rose to the top job at Vanguard in 2008, could still pitch the company's index funds as an alternative to Wall Street's traditional offerings.

Mortimer J. "Tim" Buckley, who became Vanguard's fourth CEO this week after more than two decades with the company, is the first to take over the mutual fund giant when it is no longer an outsider. In the first 11 months of 2017, Vanguard took in more than six times as much as Fidelity, American Funds, T. Rowe Price and Pimco combined. (Blackrock Inc., which is dominant in the exchange-traded fund business, is the only other asset-management firm that has rivaled Vanguard's success in recent years.)

In all, Vanguard's assets under management are closing in on $5 trillion. And considering all the talk about passive investing and the market, it can be argued that Vanguard also has more influence than all of its competitors combined. Yet at a time when Vanguard is more dominant than ever, the company has chosen its most hard-driving combative CEO yet, or at least since Bogle. When Buckley took over as the firm's chief investment officer five years ago, he threatened rivals with a price war. He repeated that threat recently. "The biggest challenge for Buckley is that the firm has been on this incredible winning streak," said Lawrence Lieberman, who is the head of executive search firm the Orion Group, which specializes in the asset-management industry. "There are not that many firms that get to offer the reins to someone with 25 years of experience at the firm."

Buckley has already shown a willingness to bend Vanguard's culture in the pursuit of more assets. Last month, Vanguard introduced its first factor, or smart-beta, exchange-traded fund, which mixes index investing with quantitative metrics to bolster performance. More are planned. Bogle and outgoing CEO McNabb had held to the firm's core vision that nothing was a smarter investment than low-cost index funds.

Both Kevin McDevitt, Morningstar's analyst who covers Vanguard, and Daniel Wiener, who writes the popular newsletter The Independent Adviser for Vanguard Investors, said Buckley's most pressing challenge was Vanguard's customer service. Its website has long been clunky and hard to navigate, one of the biggest complaints Wiener said he hears.

And the firm offers little in the way of advice when more and more upstarts are using artificial intelligence to manage customers' accounts cheaper. (Of course, many of those robo-advisers end up putting their clients in Vanguard funds.) Vanguard faithful have been willing to make the trade-off between low costs and poor service, but Wiener thinks it could be a hurdle as the company draws in more and more investors. That's especially true with ETFs, which can be bought easily in any online brokerage account. "It's a processing business that has issues with service," Wiener said. Both Vanguard and Buckley declined to comment. And Vanguard may have a growing problem in its corporate 401(k) business. The firm recently lost Chevron's giant $19 billion account to Fidelity, which still dominates the retirement plan administration business. Mike Alfred, CEO of BrightScope Inc., a financial information company that rates retirement plans, said the switch was isolated and that Vanguard's fees, which Chevron's employees complained were too high, are still among the lowest in the industry.

But the biggest threat facing Vanguard is the existential one and the one that is most pressing for the market and investors in general: How much bigger can the world's largest index fund company get without bringing it and the market down.

Already, many contend index funds are hurting the market and the economy. But even if that's not the case, Vanguard may run into a more basic Wall Street truth. Even the best investment strategies tend to work only when few know about them. Now that passive investing has become the most crowded trade on the planet, its performance should sputter at some point, and it may already be happening. Active large-cap mutual funds on average outperformed index funds for five months in a row, during the first half of 2017, their longest winning streak since at least 2009.

If the 48-year-old Buckley's willingness to take on the rest of the industry seems similar to Bogle's, it could be because his first job, in 1991, was as Bogle's assistant after four years as an undergraduate at Harvard University, where he rowed crew. (He reportedly doesn't go many mornings without putting in a few miles on his bike.) Buckley rejoined the firm a few years later after getting an MBA from Harvard. And he has risen relatively quickly. Ten years after landing his first job at the firm, he was promoted to chief information officer. Five years later, he was the head of Vanguard's retail business. And seven years after that, he was named CIO, even though he have never managed any of the firm's or its clients investments, but that seems to have worked out well for for both Buckley and Vanguard.

A decade ago, there was basically a three-way tie on top of the mutual fund investing heap. Fidelity, the leader, had about $200 billion more than Vanguard's $1.2 trillion, which was slightly ahead of American Funds, according to Bloomberg data. Nine years later, Vanguard is firmly in the lead and besting rivals on their own turf. Vanguard's active funds alone, a smaller portion of its overall funds, drew in $17.5 billion in assets in 2017 through November, according to Morningstar. Fidelity's active funds, on the other hand, lost $31.5 billion. Overall, Fidelity drew in $11.8 billion in new assets while Vanguard hauled in $325 billion. The question is how much larger Buckley can increase that lead. The answer probably lies in the growing debate over the passive index funds that Vanguard specializes in. The percent of passively managed U.S. mutual fund assets is nearing 40 percent and 20 percent of the U.S. stock market overall. That's lower than other countries -- Japan's passively managed mutual fund share hit 70 percent last year -- but it's the highest it has been in the world's largest equity market. Backlash against passive ownership has led to a growing body of research that suggests index funds are hurting the U.S. economy. Studies suggest that index funds have led to higher ticket prices in the airline industry, where common ownership is high, and to rising executive salaries and less innovation more broadly. Vanguard's size will most likely only make the criticism, and the need for Buckley to counter it, grow. The bigger threat to Vanguard's dominance is probably a micro one. Money has flowed in large part into passive investing, and by extension Vanguard, in the past few years because index funds have outperformed actively managed investment vehicles. And they have seemed safer. Actively managed mutual funds did worse than the indexes in the market downturns of 2000 and 2008. But that was most likely because those downturns were heavily concentrated in individual sectors -- technology and banks, respectively. If the next market downturn is more broad, an active fund with even a small amount of its portfolio in cash should do better than index funds, which have to stay fully invested. A prolonged market slump would certainly leave index funds even further behind.

Buckley appears to hedging the firm's bets. Factor ETFs, for one, should do better in a downturn. And he's indicated that he's planning to invest heavily in Vanguard's technology, which along with other efforts should improve the functionality of its website. Still, for the first time in its history, Vanguard's size, and its acumen at accumulating assets, could be its biggest liability. Buckley may be the right person for the job, but it won't be an easy one.