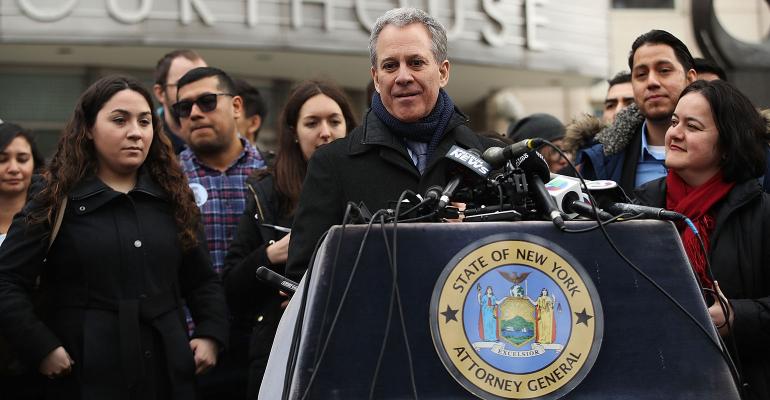 New York Attorney General Eric Schneiderman said the companies agreed to begin reporting "Active Share," or the percentage of holdings that does not overlap a benchmark index.

NEW YORK (Reuters) - Thirteen big mutual fund firms, including BlackRock, T Rowe Price and Vanguard, will soon give retail investors a new tool to assess whether they are getting their money’s worth for the higher fees often charged by actively managed stock funds.

New York Attorney General Eric Schneiderman said on Thursday the companies agreed with his office to begin reporting "Active Share," or the percentage of holdings that does not overlap a benchmark index such as the Standard & Poor's 500 .SPX, for more than 400 funds.

The new disclosures, which begin this quarter, will help “level the playing field” by giving retail investors access to “critical information” before they invest, he said. Schneiderman encouraged the rest of the fund industry to follow suit.

The 13 companies are joining Fidelity Management & Research in disclosing Active Share to ordinary investors. JPMorgan Asset Management, one of the 13, had been doing it most of the time.

Critics of Active Share fear its misuse could prompt portfolio managers to take greater risks, or steer financial advisers and investors into funds unlikely to beat the market.

Index funds have long been gaining market share in the roughly $16.3 trillion U.S. mutual fund industry because of predictable performance and low fees. They are particularly popular in employer-sponsored retirement plans such as 401(k)s.

Even the billionaire Warren Buffett believes many investors are better off with them, saying last May that passively managed funds “have delivered for shareholders a result that has been better than Wall Street professionals as a whole.”

While active funds can outperform, they labor under an average 0.75 percent annual expense ratio, compared with 0.17 percent for passive funds, according to Morningstar Inc.

So for example, if a fund owned 1,000 stocks, but 99 percent of its holdings overlapped the S&P 500, then its Active Share would be just 1 percent. Meaningful outperformance would be unlikely.

It even found a handful of funds carrying Active Shares of around 20 percent, or less, but which imposed stiff expense ratios topping 2 percent.