The tragic shooting in Orlando may have some clients questioning what's in their portfolio. For those clients uncomfortable with gun manufacturers, here are some SRI funds that screen out weapons and firearms.

The tragic and deadly attack at a nightclub in Orlando, Fla., this weekend has left much of the country in a state of shock. And as new reports continue to characterize it as the worst mass shooting in U.S. history, there's a heightened level of scrutiny on the gun manufacturing industry and calls for stricter gun controls. The incident may very well have your clients asking, "Do I own any gun stocks?" In a post-Orlando world, advisors ought to be prepared to answer such questions, and offer up fund options that don't invest in firearms, if, in fact, that's what a client wants.

"Some clients will ask, and not necessarily even the classic socially responsible investor because I think shootings cut across many political and social lines," said Leslie Samuelrich, president of Green Century Capital Management, whose funds exclude firearms and conventional weapons. "Anyone that can relate to the incident may be compelled to know."

"Exactly what questions this tragedy will engender is hard to know quite yet, but these always do make people think," said Mark Regier, vice president of stewardship investing and director of sales at Praxis Mutual Funds. "And eventually after the horror and we've digested the pain and the loss, people begin to ask questions of, why? And, how? And what could we do? And that often brings people to questions about how their own worlds are intersecting with this type of tragedy."

While unfortunate, such tragedies often bring more attention to socially responsible funds like Green Century's and Praxis' that exclude guns and ammunition. Of all the sustainable and responsible mutual funds offered by the US SIF Forum for Sustainable and Responsible Investment member firms, 58 exclude investments engaged in defense/weapons. 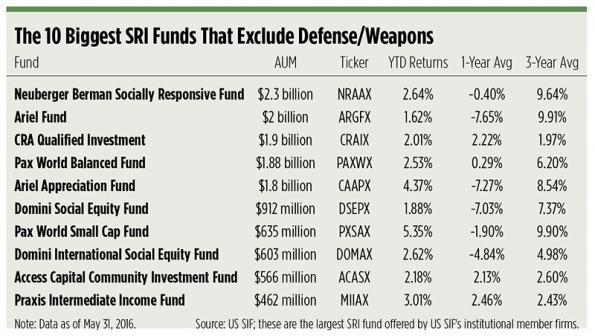 "Around gun shooting tragedies and when there are victims, people are looking for ways to express their grief or concern or take some kind of action," Samuelrich said.

"That is a way people can voice their support going, ‘I'm not investing in this industry—not only because of the machines it's producing that are killing people, but because of their role in public policy.'"

Meg Voorhes, director of research for US SIF Forum for Sustainable and Responsible Investment, said a number of SRI funds have long screened out gun manufacturers from their holdings. But these tragedies cause more money managers and institutional investors to consider the screen.

For example, after the 2012 shooting at Sandy Hook Elementary School, consideration of gun and weapons issues by money managers increased four-fold in asset-adjusted terms, according to a 2014 survey by US SIF. By 2014, the criteria was incorporated by 292 investment vehicles, representing $588 billion in assets. Concerns over military and weapon production increased five-fold among institutional asset owners between 2012 and 2014.

Voorhes expects a similar reaction among money managers to the Orlando shooting. She also believes the shooting could be embarrassing for a number of retail funds that include gun manufacturers, especially index funds.

"It's not as if they specifically went out and said, ‘We want to own gun stocks,' but they say, ‘We want to copy the index,' and that includes Sturm Ruger, Smith & Wesson," she said. "I think it's going to increase pressure on money managers that don't exclude gun manufacturers to justify why that is."

For SRI funds, it's not just about excluding companies that could harm people or the environment; it's steering clear of those most susceptible to business or environmental risk.

"That can be many things, like a lawsuit, a protest, a campaign, or in light of Orlando's tragedy, the increased sudden scrutiny around a company that is producing a product that is essentially designed to injure and kill people," Samuelrich said.

"I would imagine that if any of the manufacturers are looking to secure more capital for expansion, it becomes increasingly difficult in this climate," she said.