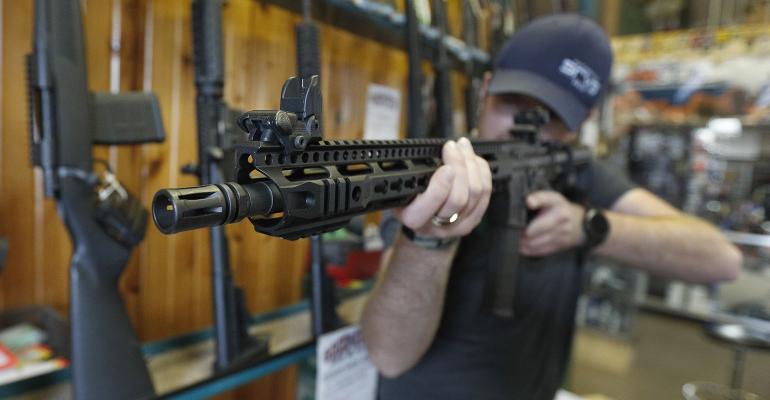 Guns and More Guns: Will Wall Street Ever Let Go of Firearms?

By Laura Colby and Polly Mosendz

(Bloomberg) --Will Wall Street ever let go of guns?

That question has come up before -- after the shootings in Newtown, in Orlando, in Las Vegas, and on and on.

Now, with the nation’s emotions raw over the killings in Florida last week, evidence is mounting that investors may be rethinking their long, fraught relationship with the firearms industry.

On Thursday, the day the head of the National Rifle Association issued a searing rebuttal to calls for stricter gun control, the nation’s largest privately owned bank announced it would stop issuing NRA-sponsored credit cards.

Then, the investment giant BlackRock Inc. said it was exploring ways to cull gun companies from the portfolios of clients who no longer wish to invest in them. In Florida, site of the latest tragedy, teachers expressed frustration that their retirement funds own gun stocks, following revelations that holdings included the maker of the assault rifle used to kill 17 students and educators at Marjory Stoneman Douglas High School in Parkland.

Activists have made similar appeals for years, only to see all the moments pass. Taken together, the recent developments suggest that, at least for the moment, the financial community senses the rising public pressure -- and is positioning itself accordingly.

“Now is the time for the financial services industry to step off the sidelines and take a stand,” said Jonas Kron, director of shareholder advocacy at Trillium Asset Management, which focuses on sustainable investments.

The question is whether other investors, both big and small, are willing to exit investments that have plunged in value over the past year. Gun sales -- and gun stocks -- have tumbled since Donald Trump rose to the presidency. The thinking was that his administration, unlike the previous one, would be unlikely to push for stricter gun controls given its support from the NRA. A quiet backlash has been building for years. Some major endowments, such as the $10 billion University of California fund, sold guns stocks after the 2012 Sandy Hook school shooting in Connecticut, which prompted calls for more gun control.

“We continue to monitor this issues and take it very seriously," said Dianne Klein, a spokesperson the university system. Others are, too. On Thursday, the First National Bank of Omaha said it wouldn’t renew its contract with the NRA for a branded credit card, because of “customer feedback.”

It isn’t clear how many of the NRA’s nearly five million members hold the credit card. Representatives of the NRA didn’t immediately return request for comment. The Second Amendment-rights organization continues to offer a prepaid card, issued by Republic Bank & Trust Co. The bank didn’t reply to request for comment on the matter.

An increasing number of institutions, be they pension funds or municipalities, are demanding that their portfolios exclude companies that make guns and other weapons. Many of the funds, such as the giant CalSTRS, represent one of the groups most affected by school shootings: teachers.

More than $845 billion of U.S. institutional assets restricted investments were in weapons as of the start of 2016, according to data from US SIF, the Forum for Sustainable and Responsible Investment. That number soared more than 1,000 percent following the Sandy Hook school shooting in December 2012, from $74 billion at the start of 2012.

Rommel Dioonisio, managing director of research at Aegis Capital Corp., said that given the outcry over the latest shooting, “it would certainly not surprise me to see other state funds divest their investment holdings in the industry.” Still, that might not depress gun stocks given other investors will probably still be willing to buy them.

For the moment, holders are not just dumping shares of gun makers. Some are trying to exert pressure from within: Shareholders have filed at least three proposals at sellers or makers of guns in the current proxy season. The proposals ask American Outdoor Brands Corp., maker of Smith & Wesson; Dick’s Sporting Goods Inc.; and Sturm Ruger & Co. to report on steps they’re taking to improve gun safety and to mitigate the harm associated with gun products.

The proposals were filed by religious groups affiliated with the Interfaith Center on Corporate Responsibility, whose members includes 300 institutional investors that manage $400 billion in assets.

Some institutions, such as BlackRock which manages $6.3 trillion, are privately contacting gun companies to make their case.

“Given our inability to sell shares of a company in an index, even if we disagree with management, we focus on engaging with the company and understanding how they are responding to society’s expectations of them,” said BlackRock spokesman Ed Sweeney. "We will be engaging with weapons manufacturers and distributors to understand their response to recent events.”

He added that BlackRock works with clients who want to exclude weapons makers from their portfolios. BlackRock manages more than $200 billion of assets that are screened for weapons ownership and other value-based issues.

Larry Fink, BlackRock’s CEO, wrote to portfolio companies last year, warning that in addition to making money, they must also be aware of the impact on society.

Sweeney declined to comment on whether BlackRock would vote in favor of the shareholder proposals at proxy meetings this year. BlackRock is largest holder of the three companies where the proposals have been filed: Dick’s Sporting goods, with 8.4 percent; Sturm Ruger, with almost 17 percent; and American Outdoor Brands, with 11.11 percent.

At each of the three, whose market capitalization is relatively small, anywhere from a quarter to nearly half of shares are owned by a handful of large institutions that, like BlackRock, generally track market indexes.

Pension funds managed for public school teachers in at least a dozen U.S. states, including New York and California, own stocks issued by the makers of firearms or ammunition.

The financial stakes held by teacher pension funds in gun companies, like those of other equities, each represent only a sliver of the multibillion-dollar state retirement systems’investments, according to a Bloomberg analysis. But the holdings have become a hot-button issue in Florida, where last week’s massacre prompted teachers and students to pressure public officials to prevent similar attacks.

The Florida Education Association, which represents educators but doesn’t control the pension fund, urged the state body that does to sell its more than a half-million dollars’worth of American Outdoor stock, as well as that of other gun companies.

“I am sure that most of Florida’s public school employees are as sickened as I am to learn that the state has invested some of our pension fund holdings in the maker of the AR-15,”said Joanne McCall, president of the FEA, an affiliate of the National Education Association. “Surely there are better places for the state to invest its public employee retirement moneythan in companies that make products that harm our children.”

The statement followed a Bloomberg report on Tuesday detailing the Florida pension fund’s investments in the firearms industry.

John Kuczwanski, a spokesman for the Florida State Board of Administration, which manages the fund, said that “as fiduciaries, the SBA must act solely in the interest of the participants and beneficiaries.” He didn’t say whether the fund will follow the divestment demand by the teachers’ union.