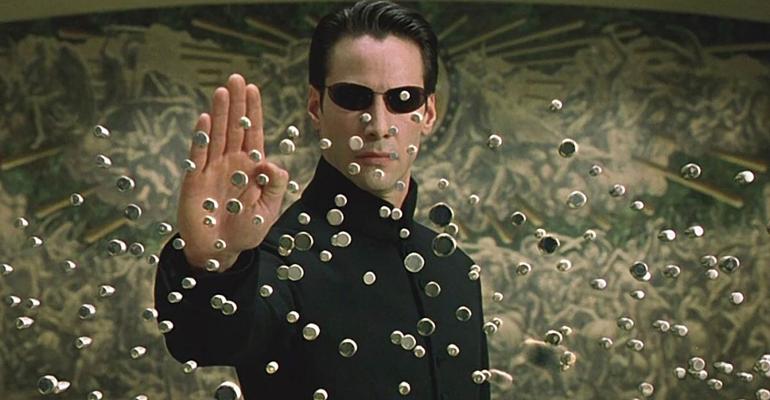 True market neutrality is hard to find. Hundreds of portfolios may claim the title, but only a handful consistently deliver the factor.

Recent market volatility is getting investors and advisors thinking anew about divorcing themselves from beta. Interest in low-volatility products has surged lately, but these strategies only mitigate downside risk at the cost of upside momentum. Low-vol products don’t dissociate investors from beta entirely; they only attenuate the effects attributed to beta.

Equity market volatility’s been in an uptrend for more than a year and a half as measured by the Cboe Volatility Index, or VIX. You can see the ascending trajectory of the VIX 50-day moving average in Chart 1. 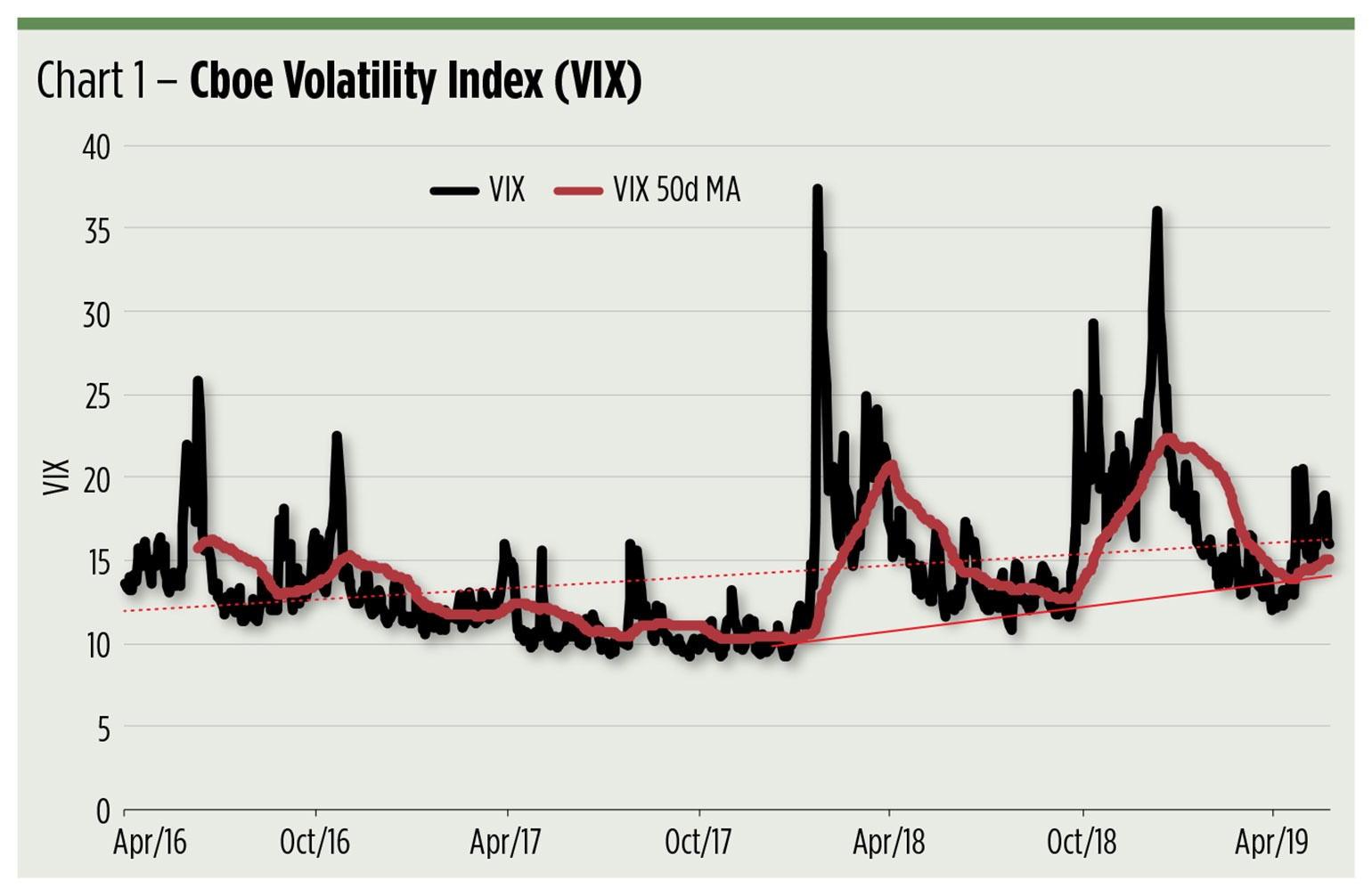 The factors that have stirred up this volatility—concerns about global markets and growth, trade tiffs and tariffs, mounting tensions between the U.S. and China, among others—aren’t likely to dissipate soon. There might be a bid under VIX—often referred to as the “fear index”— for some time to come. This volatility can be a corrosive headwind for equity returns.

Since VIX is derived from the volatility assumptions embedded in S&P 500 options prices, there’s a link between VIX and beta. Getting rid of one very often means disposing of the other, to some degree or another.

One way in which beta can be stripped away is in the pursuit of a “market-neutral” strategy. There are lots of so-called market-neutral portfolios around, but they’re not all created equal. Some exclusively utilize equities and equity derivatives. Some don’t own a single stock. And many aren’t even neutral. You’ve got to dig around to find the real beta killers.

For our part, we sifted through the mutual fund and exchange traded fund universes for seasoned portfolios that have been consistently market neutral over the past three years. In other words, we looked for funds with single-significant-digit beta coefficients (-0.09 to 0.09). For the mutual funds, we considered only portfolios available to retail customers through “A” or “Investor” class shares (ETFs, of course, are universally available to individual investors). In the end, we had 14 mutual funds and three ETFs.

Table 1 lists our roster of market-neutral mutual funds ranked by the absolute value of their beta factors. 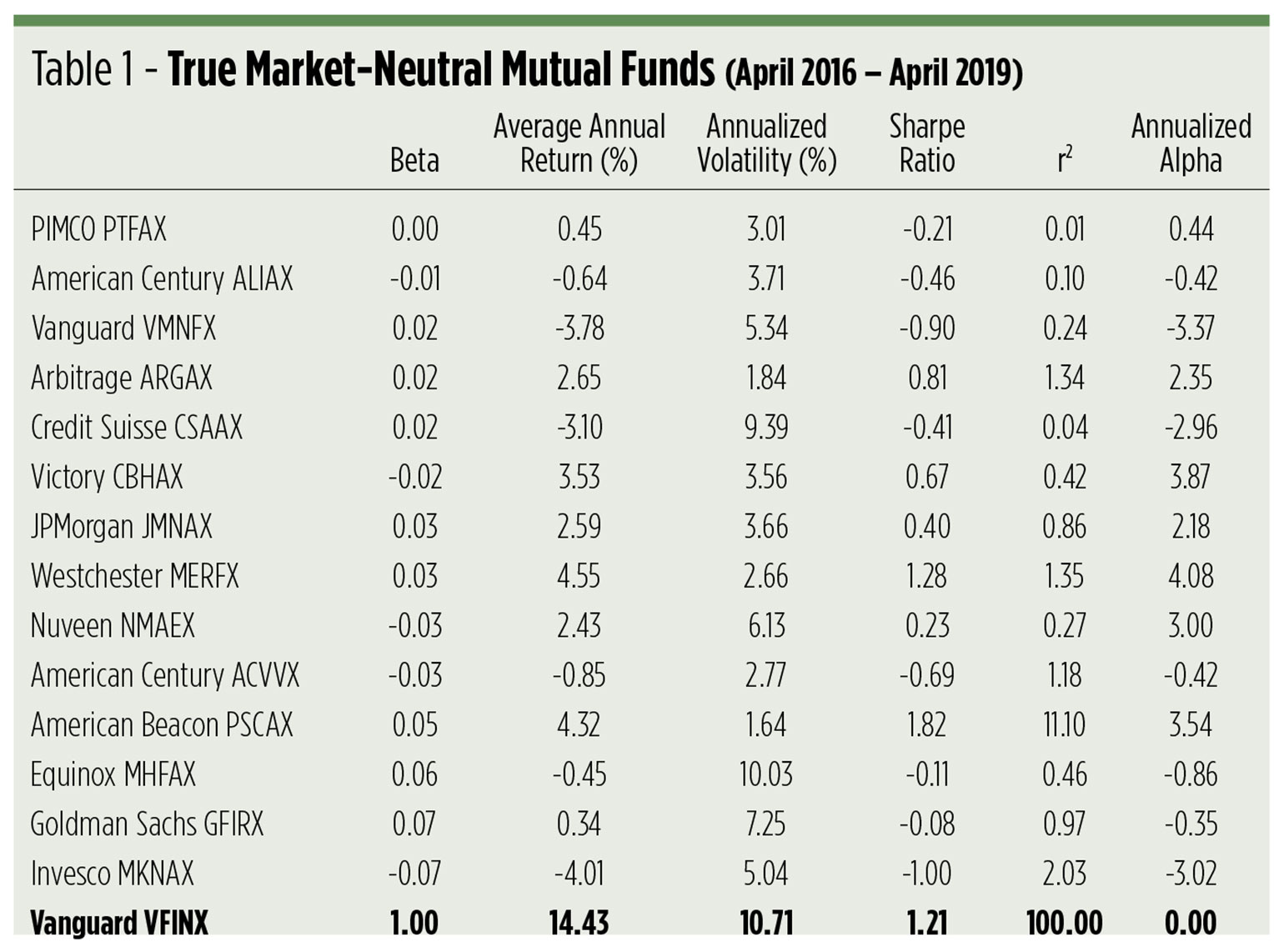 Note the dispersion in average annual returns as well as in the alpha coefficients versus the Vanguard 500 Index Fund (OTC: VFINX), a mutual fund proxy for the S&P 500. Eight of the funds produced positive—albeit modest—annual returns over the period, but only seven turned out positive alpha.

The Westchester Merger Fund (OTC: MERFX) claims to be the first mutual fund to deal exclusively in merger arbitrage and corporate reorganizations. While MERFX doesn’t exhibit the lowest historic[JK1]  correlation to long-only equity, it suffered little when the broad market swooned over the past three years. The fund’s worst drawdown was only a 1.35% setback. The fund’s positive correlation to interest rates, too, offered investors a hedge against decreasing bond values when yields were rising.

A rules-driven methodology is behind the Victory Market Neutral Income Fund (OTC: CBHAX). The fund’s managers buy a global portfolio of high-dividend-paying stocks, then lay off beta by shorting S&P 500, Russell 2000 and MSCI EAFE futures. An options writing overlay,  in conjunction with VIX futures, is used to further enhance income.

The aptly titled American Beacon SSI Alternative Income Fund (OTC: PSCAX) invests in convertible bonds and preferred shares, but it’s not a long-only portfolio. Relying on quantitative and fundamental analysis, PSCAX managers engage in arbitrage to limit the overall portfolio’s duration and volatility. Of all the funds in the table, PSCAX endured the smallest drawdown—just 0.78%—over the past three years.

Like MERFX, the Arbitrage Fund (OTC: ARGAX) wades in waters populated with acquirers and soon-to-be-acquireds, hoping to capture the spread in each deal between the current cost of the target company’s stock and the offered price.

The JPMorgan Research Market Neutral Fund (OTC: JMNAX) pulls alpha out of its portfolio by stacking long positions in undervalued large- and mid-cap stocks against short stakes in more overvalued issues. The short and long sides of the fund are dollar- and sector-balanced to minimize exogenous market influences.

We fielded 13 portfolios on the ETF side, but only three made the beta cut. Of these, just one cranked out positive alpha when measured against the SPDR S&P 500 ETF (NYSE Arca: SPY).

Our little thought experiment reveals a couple of salient points. First of all, true market neutrality is hard to find. Hundreds of portfolios may claim the title, but only a handful consistently deliver the factor. Fewer still furnish positive alpha. That’s to be expected, really. Alpha’s always a scarce commodity, but alpha as an artifact after washing away beta? Rarer still.

Looking at the tables you can clearly see what alpha is not. Alpha is not a return in excess of the benchmark. Over the past three years, the S&P index trackers appreciated, before dividends, at an average annual rate exceeding 14%. The average return of the positive alpha producers? Not quite 3%.

Instead, alpha measures an investment’s return in excess of the expectations for its risk level. That risk level is beta. In an up market, a fund with greater risk is expected to outperform. To boost beta over the past three years was to boost returns. When the market heads south, however, beta becomes a performance drag.

Canceling out beta leaves one with only the return obtained from the manager’s inherent skill. In the days ahead, investors and their advisors may begin to look more favorably upon the compensations offered by truly market-neutral funds with positive alpha coefficients.