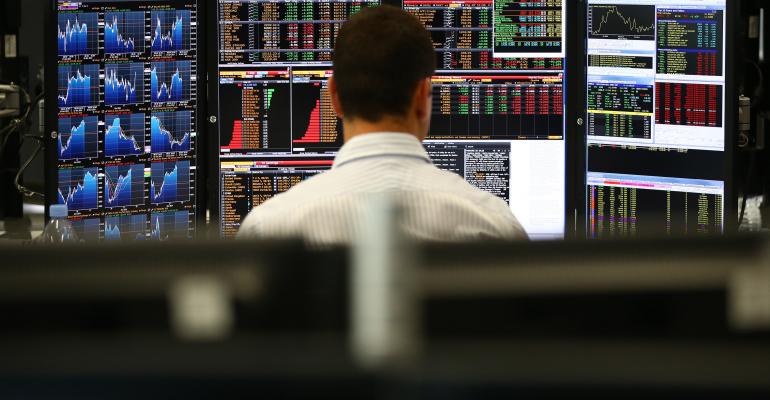 Advisors believe the market is headed for a correction, AI is no threat to wealth managers and cryptocurrencies are now tracked on the Bloomberg Terminal.

Despite the increasing popularity of passive funds, 77 percent of advisors say they would be open to putting their clients in an actively managed mutual fund that charges passive-like fees, with higher fees when the fund outperforms its benchmark index, according to a new survey by AllianceBernstein. Nearly 80 percent of advisors believe the market is headed for a correction, and 62 percent expect passive strategies to underperform active counterparts in a down market. AB surveyed about 210 advisors at Schwab’s IMPACT Conference in November.

Wealth Managers Have Nothing to Fear from AI There’s been plenty of hand-wringing about artificial intelligence and the future of wealth management, but the head of research at Clearview Financial Media finds those fears overblown. In a recent report, the firm finds wealth managers fearing artificial intelligence as a potential threat to their jobs, perhaps exacerbated by the fact that most of their firms have taken an interest in the technology. But at the end of the day, the researchers say artificial intelligence will be great at gathering and regurgitating data, but never in replacing the element of trust that comes with financial relationships. “The old adage that ‘people buy from people’ seems to remain true, and not just due to trust issues. Rather, it is that the human element of wealth management is where much of its value resides,” the report finds.

Bloomberg Adds Cryptos to the Terminal

Bloomberg has added more digital currency prices to its terminal service. In addition to bitcoin, the firm has added the prices for Ripple, Ethereum and Litecoin, serving as a validation of sorts for digital currencies, according to Fortune. These “alt-currencies” have been gaining popularity with the price jump in bitcoin. Ethereum saw its price soar from under $10 to $200 in a few months, and is now trading near $700. Litecoin and Ripple have also experienced recent price surges. The prices for the cryptocurrencies on the terminal are drawn from Bitstamp, a Luxemboug-based digital currency exchange.