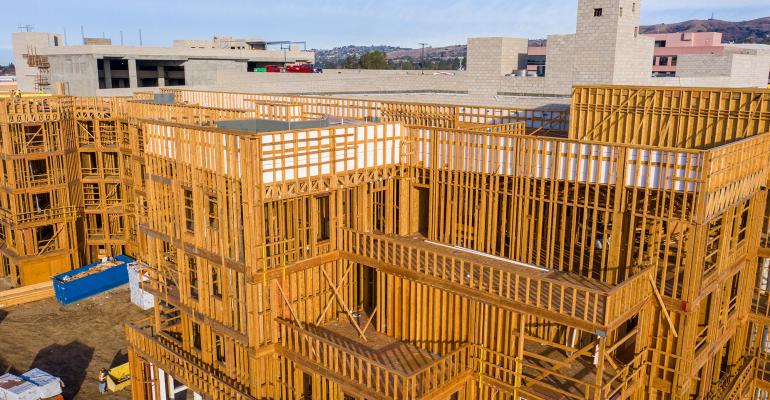 Residential starts rose 1.4 percent to a 1.70 annualized rate. Applications to build jumped 9.1 percent to an annualized 1.87 million units in December.

Residential starts rose 1.4% to a 1.70 million annualized rate from a 1.68 million pace in November, according to government data released Wednesday. For all of 2021, 1.6 million homes were started, a 15.6% surge from the prior year and the most since 2006.

Applications to build, a proxy for future construction, jumped 9.1% to an annualized 1.87 million units in December, the highest since January of last year. Permits in 2021 surged 17.2% from the previous year.

Home prices have surged over the last year as potential buyers compete for a very limited number of homes. Builders are racing to replenish inventory, but supply chain challenges, high commodities prices and a lack of skilled workers have elongated construction timelines and inflated backlogs.

Without enough finished homes to meet demand, housing affordability is poised to deteriorate further in 2022. Mortgage rates now stand at the highest level in nearly two years, which will make it that much more difficult for those looking to become homeowners for the first time.

“To the extent that 2022 brings anything new, it will be the question of whether higher home prices and/or rising mortgage rates will dampen demand enough to bring the market into better balance,” Stephen Stanley, chief economist at Amherst Pierpont Securities LLC, said in a note.

Multifamily starts -- which tend to be volatile and include apartment buildings and condominiums -- climbed 10.7% to a 530,000 rate, the fastest since February 2020.

Single-family starts eased 2.3% in December to an annualized pace of 1.17 million units, the government’s report showed. At the same time, applications to build one-family dwellings increased 2% to the highest level since May.

Overall new home construction slumped nearly 14% in the West and slipped 1.9% in the South. Starts advanced solidly in the Northeast and Midwest.

Looking ahead, the omicron variant and the corresponding surge in Covid-19 cases could exacerbate the issues already faced by builders. Homebuilding sentiment so far remains intact though with a gauge of builder confidence slipping just slightly in January.

The number of one-family housing units still under construction increased to the highest level in almost 15 years, extending a steady uptrend since June 2020.

--With assistance from Kristy Scheuble and Olivia Rockeman.