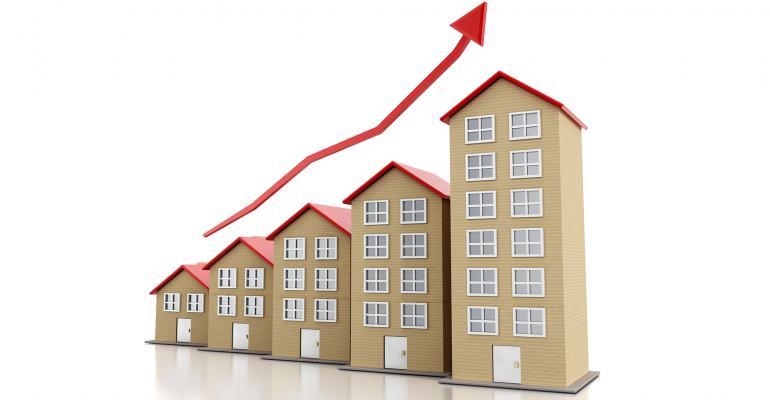 The Fed plans to continue to raise interest rates to help stem inflation and that’s changing the math for apartment investors looking to make deals, but so far it’s not leading to any drop in interest in the multifamily sector.

Other factors—most importantly, rising rents—are offsetting the interest rate risk and keeping property prices at lofty levels. And instead of fleeing the market, leveraged investors are sharpening their pencils. Some are turning to fixed-rate financing to protect themselves from increases in variable rate debt.

"We are not seeing widespread repricing and bidder pools remain robust,” says Matt Vance, senior director and Americas head of multifamily research for CBRE, working in the firm's Chicago offices. “There isn’t enough evidence suggesting the market has made a hard turn in a new direction.”

Interest rates are rising, and likely to keep rising

Long-term interest rates have risen considerably since the start of 2022. The benchmark yield on 10-year Treasury bonds hit 2.9 percent on April 22. That’s up about 140 basis points from 1.5 percent at the end of 2021. It’s also much, much higher than the chaotic first year of the pandemic, when the yield fell as low as 0.5 percent. (The interest-rates for many permanent loans are based on Treasury bond yields.)

Lenders are passing these higher, fixed-rate interest rates onto borrowers. They have not cut the spread between their fixed interest rates and Treasury yields.

“Typically, when treasuries increase, spreads also compress,” says Charles Halladay, senior managing director and co-leader of the National Multi-Housing Group for JLL Capital Markets, working in the firm’s San Francisco offices. “Due to geopolitical turmoil and other factors, we have not seen spread compression.”

Short-term, floating-rate interest rates have not risen much so far. The Secured Overnight Financing Rate (SOFR), calculated by the New York Federal Reserve, was still just 0.27 percent at the end of April. But investors and economists expect them to rise quickly. The “forward curve” of expectations for SOFR puts the rate at nearly 3 percent by April 2023, falling back towards 2.5 percent by 2025, according to Chatham Financial. These expected higher rates would be passed on to floating-rate borrowers instantly.

The likelihood that short term rates will rise has changed the math for many apartment investors, especially for properties with limited potential for growth. “This has resulted in buyers taking less leverage and/or looking at fixed-rate programs,” says Halladay.

Borrowers can buy swaps or caps that limit how high their floating interest rates can rise—but those are also getting more expensive. “Cap costs and hedging around these floating-rate executions have also increased 10 times since the beginning of the year,” says Halladay.

These higher interest rates will force many apartment buyers to take out smaller loans for their apartment properties. And that means smaller leveraged returns on their investments.

Most lenders won’t make a loan if the monthly income generated by the property isn’t significantly more than the monthly mortgage payments. As interest rates rise, the amount of debt a property can support becomes smaller and smaller.

That will cut into the yields of many apartment investments.

“Capital appreciation returns will be negatively affected by rising rates—obviously for leveraged investments,” says CBRE’s Vance. “It isn’t clear yet whether buyers will be willing (in the near-term) to accept lower returns and maintain current underwriting standards or if they’ll have to lower their offer prices on particular assets.”

So far, the sharp rise in interest rates in March had little visible impact on apartment sales activity in the first quarter of 2022, according to CBRE.

Investors spent $63 billion to buy apartment properties in the first quarter of 2022, according to data firm Real Capital Analytics (RCA), a data firm based in New York City and a part of MSCI. That’s 56 percent more than they spent the year before, and one of the biggest first quarters ever—and the pace of sales got faster interest rates rose in March.

“If anything, the rising rates are causing a surge in owners to market their deals ahead of schedule,” says CBRE’s Vance.

Prices continue to rise relative the income produced by apartment properties. Cap rates averaged 4.4 percent, down 40 basis points compared to the year before.

If the apartment rents continue to rise quickly in 2022, that will solve many of the problems caused by rising interest rates.

“The big debate today is whether the fundamentals—renter demand and rent growth—will remain strong enough to overcome the rising cost of capital,” says Vance. “So far, it appears so.”