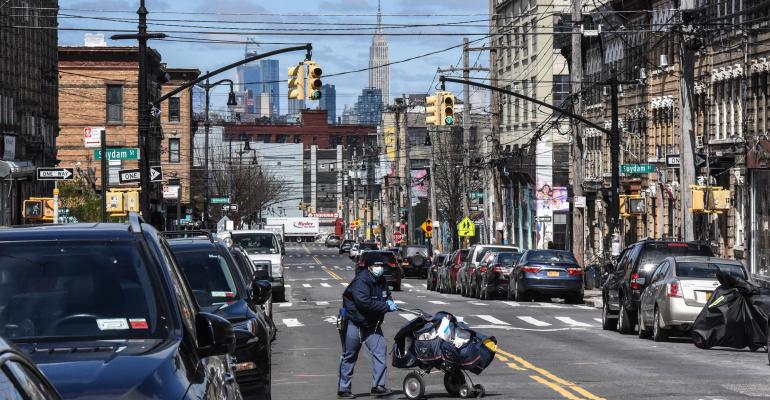 By December, the city’s apartment investors were behind on $395 million in debt backed by mortgage bonds.

By December, they were behind on $395 million of debt backed by mortgage bonds, almost 150 times the level a year earlier, according to Trepp data on commercial mortgage-backed securities. Tenants in rent-stabilized units owe at least $1 billion in rent and wealthier ones are fleeing the city, leaving behind vacancies and pushing newly-built luxury towers into foreclosure.

For years, as crime dwindled and rent climbed in New York, investors gobbled up apartment buildings. But with the city’s economy and culture crushed by Covid-19, mounting job losses have derailed the gentrification boom and put financial pressure on landlords.

“The people who specialize in mortgage workouts are the busiest people in New York real estate,” said Barry Hersh, a clinical associate professor of real estate at New York University.

The developers who are in the most trouble pushed hard into Harlem and the Brooklyn hipster hubs of Crown Heights, Flatbush and Bushwick, squeezing out working-class residents by building new expensive units. Now, they’re grappling with eviction bans and new tenant protections as rent falls across New York.

Colony 1209, a steel-gray apartment building, opened six years ago in the heart of Bushwick, an industrial vision of urban chic, with a billiards room and 24-hour doorman. The website pitched one bedrooms for $2,500 to “like-minded settlers” in the mostly Black and Hispanic neighborhood, which it called Brooklyn’s “new frontier.”

Now Colony, renamed Dekalb 1209, faces foreclosure after owner Spruce Capital Partners defaulted on a $46 million mortgage. The five-year interest-only loan matured in October and was not extended, triggering the default, according to monthly filings by the loan’s servicer, Wells Fargo & Co.

The lender is filing to repossess the building -- as soon as New York’s foreclosure moratorium expires -- while simultaneously discussing workout alternatives with the borrower. Spruce could not be reached for comment.

Right before Covid hit, investors were willing to pay top-dollar for luxury buildings like Colony. They wanted alternatives to rent-regulated buildings, which saw values crimped by a 2019 law that banned tactics landlords depended on to convert rent-stabilized units to market-rate.

Emerald Equities, a fast-growing condo conversion specialist, filed for bankruptcy in December on buildings in Harlem. In its filing, the company said its “well-laid plans were stymied” by the tenant-friendly law. Residents organized a rent strike, then collections plunged even more after the pandemic, driving Emerald to hand ownership to LoanCore Capital, which loaned $203 million for the project.

Doug Kellner, an attorney for Emerald tenants, blames the current market troubles on New York’s eviction ban because it came without any accompanying financial support.

“Everybody realizes that rent is the green blood that keeps a building operational,” Kellner said.

Across the boroughs, rents are on a downward spiral, as landlords try to fill empty apartments with ever-sweeter tenant concessions -- only to see the number of vacant listings surge further.

In Manhattan, available units nearly tripled in December from a year earlier, and the median rent plunged 17% to $2,800, according to data from Miller Samuel Inc. and Douglas Elliman Real Estate. Rents are down 11% in Brooklyn and 18% in Northwest Queens, where starry-eyed developers built glassy apartment fortresses along the waterfront for young midtown professionals.

A mail carrier crosses an empty Wyloff Ave. in the Bushwick neighborhood of Brooklyn in April.

In some ways, investors may be better insulated than after the 2008 financial crisis. Lenders generally required bigger down payments and underwrote loans based on current rents rather than expectations for the future, said Shimon Shkury, Ariel’s president. If the vaccine works and college students and office workers start to return, so will the market, Shkury said.

“I don’t think there will be as much distress as you think,” he said.

Lenders have already put $1.4 billion of commercial-backed multifamily debt on watchlists because of issues such as rising vacancies or impending maturities. That’s 19% of all outstanding debt, compared with 22% at the nadir of the financial crisis.

The trouble will filter from highly-leveraged investors who expanded quickly to lenders with the most aggressive underwriting, says NYU’s Hersh.

“There will be banks that go under,” he said.

At the same time, the market for multifamily buildings has gone soft. The total dollar volume of New York City multifamily sales was $4.5 billion in 2020, a 61% plunge from 2018, before the pandemic or the new rent laws, according to a report by Ariel.

Still, firms such Limekiln Real Estate Investment Management, see opportunities. The company made $224 million in New York multifamily loans in the second half of 2020, up from $9.3 million before the pandemic. It’s easier to extract better terms in a “lender’s market,” said Scott Waynebern, Limekiln’s president.

“It’s tricky to find where the bottom is,” he said.