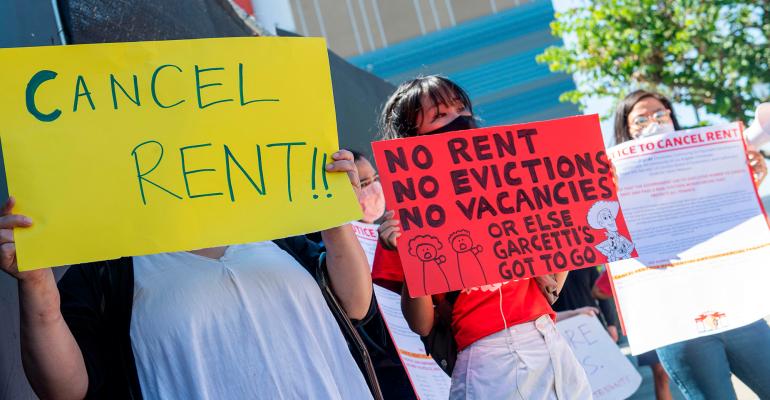 More Than 5% of Americans Didn’t Pay Rent, Mortgage in December

About 5 million Americans didn’t make their rent or mortgage payment in December, according to an MBA survey.

(Bloomberg) --Mounting housing bills are one of the biggest shadows hanging over the U.S. economic recovery.

About 5 million Americans didn’t make their rent or mortgage payments in December, according to a survey released Monday by the Mortgage Bankers Association’s Research Institute for Housing America. That translates into more than 5% of total U.S. renters and mortgage holders.

Another 2.3 million renters and 1.2 million mortgagors said they believe they are at risk of eviction or foreclosure, or would be forced to move in the next 30 days, the study found.

The survey data adds to evidence of the economic damage brought to many Americans from the pandemic and corresponding business shutdowns. Some 9.3 million jobs were lost last year and the U.S. suffered the sharpest rise in the poverty rate since the 1960s.

While the percentage of households behind on their payments has decreased since last June, there were still 2.6 million renters that missed, delayed, or made a reduced payment in December. Another 2.4 million homeowners missed their mortgage payments that month, according to the report.

The MBA data largely aligns with the U.S. Census Bureau’s Household Pulse survey which found that, as of Jan. 18, about six million adults fear that eviction or foreclosure in the next two months is either very likely or somewhat likely.

Rental-property owners are bearing much of the brunt of the unpaid bills. In aggregate, they lost as much as $7.2 billion in fourth-quarter revenue from missed rent payments, according to the MBA survey, though the figure declined from the prior quarter.

Fewer people surveyed at the end of last year said they feared losing their homes, which may be a result of government aid so far, said Gary Engelhardt, economics professor in the Maxwell School of Citizenship and Public Affairs at Syracuse University.

“This confidence is perhaps an indication that direct checks and enhanced unemployment benefits, rental assistance, mortgage forbearance programs, and a federal eviction moratorium have so far been effective in keeping people in their homes,” he said.

President Joe Biden has proposed an additional $1.9 trillion pandemic-relief package, which is currently being debated by lawmakers.

The MBA report contains data from an internet panel survey of over 8,000 households.