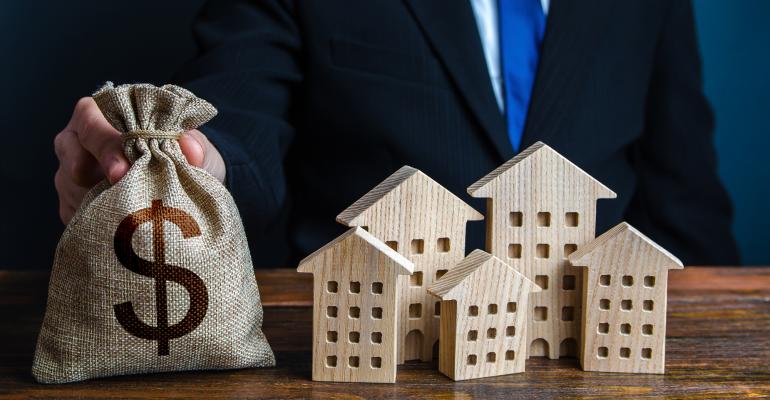 Increased Cost of Capital Forces a Reset of Multifamily Valuations

Buyers are beginning to ask for discounts and some deals fall through. But experts say the disturbance in the sector is based on “short-term uncertainty.”

In early June, two days before the Federal Open Market Committee increased the Federal Funds Rate by 75 basis points, Odyssey Properties Group struck a deal to buy a multifamily asset in Dallas at a 3.5 percent cap rate. The Los Angeles-based real estate investment firm was hoping to add the garden-style property to its existing portfolio, which consists of 44 properties comprising 7,217 multifamily units across 14 states with a total estimated value of more than $1.5 billion.

As Odyssey progressed toward a purchase and sale agreement (PSA), it struggled to obtain a float loan, so it put the purchase on hold, according to Derek Graham, president and principal at Odyssey. By late July, the firm had nailed down an agency loan and resumed discussions with the seller, who’d bought the property for $18 million in 2019.

For Odyssey to achieve the same returns it had projected just six weeks earlier, the firm needed the seller to reduce the price by $3 million, or roughly 10.5 percent off the original price of $28.5 million.

“Even with that decrease, the seller would have achieved an amazing return, given what he paid for it,” Graham notes.

The seller was willing to shave $1 million off the purchase price—a decrease of roughly 3.6 percent. To no one’s surprise, the deal ultimately fell apart.

“The seller’s question to us was: ‘Why should I sell for less?’,” Graham recalls. “I understand his position because I’m an owner too. The reality is that rents are increasing anywhere from 12 to 20 percent, and he’ll be able to increase his net operating income, probably by 15 percent or more. And if he decides to sell a year from now, he will have recouped the $3 million reduction that I needed to close the deal today.”

Shaking off the lost deal, Odyssey shifted its focus and locked down a multifamily property in Phoenix at a 4.4 percent cap rate. Unlike the Dallas owner, this one was “willing to meet the market,” according to Graham.

Odyssey’s experience certainly isn’t unique. In fact, it has become quite common in today’s uncertain investment sales climate. There has been a bit of a standoff between buyers trying to achieve a certain yield and sellers insisting on their original price, Graham notes. The sellers haven’t adjusted their expectations to an environment with higher interest rates.

“Just 90 days ago, their asset was worth a 3.5 cap rate, and they’re resistant to making needed adjustments. For us buyers, debt is now more expensive, so we need a 10 to 15 percent discount for a deal to generate the same kind of return potential.”

After the Fed’s initial rate hike in March, many multifamily sellers were willing to work with buyers and re-trade assets at 3 to 5 percent less than original agreements. The embedded gains that investors have achieved in recent years certainly helped by providing more flexibility to give some back to buyers so deals can get done, notes Brian McAuliffe, president of capital markets, who leads multifamily investment sales business at commercial real estate services firm CBRE.

However, with each successive rate hike, the buy-sell gap has widened. Experts estimate that valuations have decreased from 8.0 percent to 15.0 percent, with core assets in growing markets landing near the low end of the range and value-add opportunities hitting double-digits.

Because data detailing recently closed deals is not yet available, it’s difficult to pinpoint exactly how much valuations have reset. Furthermore, investment activity has slowed significantly over the second quarter, making it even more difficult for investors to confidently value properties.

No motivation or desperation to sell

Many owners are paralyzed by indecision, unsure whether they really want to sell off their multifamily assets, according to Kurt Houtkooper, CEO of Hamilton Zanze (HZ), a San Francisco-based real estate investment company that owns and operates 132 properties totaling 22,821 units across 17 states and 30 markets.

“Owners know valuations have changed, so they don’t feel very motivated to sell, and fundamentals are so strong, there aren’t a lot of desperate sellers either,” Houtkooper notes.

Since its founding in 2001, HZ has acquired more than $5.9 billion in multifamily assets. The firm’s strategy is to buy an asset that it thinks is broken, fix it and sell it once it’s stable. Then, the firm will do a 1031 exchange, investing the proceeds into another property.

“We’re a value-add shop, and we’re going to buy and sell through the cycles,” Houtkooper says, adding that earlier this year, the firm decided to dispose of several properties and has no desire to deviate from that plan. “We’re still selling the properties that we planned to sell, and we’re still making a profit, just not as much as we would have if we’d sold in January 2022.”

Beyond valuations, owners might be hesitant to sell because there are fewer properties on the market. Odyssey’s Graham likens the current environment to a game of musical chairs, where if an investor sells a property, it might be a challenge to find a replacement asset.

Many buyers who have been active over the past few years are now on the sidelines, closely watching the action in the “field.” Houtkooper estimates that the buyer pool has decreased in terms of size and quality. He notes that four months ago, the firm was getting 30 offers and today it’s getting about 10, and those 10 offers may not be as high quality as they were previously.

He also adds that buyers have returned to the traditional due diligence period after three years of offering non-refundable money from day one.

That’s a bummer when you’re a seller, but a boon when you’re a buyer. “We like it when there’s less competition,” Houtkooper says. “Our thought is that we might sell at a discount, but we’ll also be buying at discount.”

HZ’s strategy to combat higher interest rates and increased cost of capital is to seek out properties with existing assumable debt. Currently, the firm is in the middle of acquisition process for two apartment communities in Tennessee totaling roughly $150 million. It will assume agency loans for both properties and expects to achieve a positive arbitrage on cap rates, according to Houtkooper.

“By assuming a loan, we know the loan constant, and we’re taking out market volatility,” he says.

Aegon’s Peyton says well-capitalized and respected buyers have increased leverage in this market. “As a function of changes and uncertainty in the capital markets, buyer credibility has certainly become of increased focus during seller due diligence,” she notes. “Operators with less reliable capital sources are being scrutinized much more heavily.”

Of course, all-cash buyers continue to hold the power position over buyers who use debt to acquire assets, even those like HZ, which boasts a balance sheet that is strong enough to assume loans.

How much will valuations continue to shift?

Industry players predict that investors will have a much better handle on the market by the fourth quarter, which should help stabilize valuations.

“If multifamily properties continue to perform well and rents continue to increase, I would be very surprised if there was another large shift in values,” says John Sebree, senior vice president and national director of Marcus & Millichap’s multi housing division. “They might slide up and down a little, but I think the big shift has already taken place.”

Sebree expects that once valuations stabilize, investment activity will pick up as well. He notes that here is little concern in the industry about multifamily investment levels and property fundamentals in the sector in the next five to seven years. The current market hesitancy is about short-term uncertainty, he notes.

Graham says his firm will continue to pursue multifamily acquisition opportunities even if interest rates continue to increase (as the Fed has indicated). “Our industry got intoxicated on cheap debt in 2020 and 2021, but interest rates are pretty much exactly where they were in 2019,” he notes. “With realistic buyers and sellers, cap rates will also return to 2019 levels, and I think we were all pretty happy with the returns we were getting back then.”