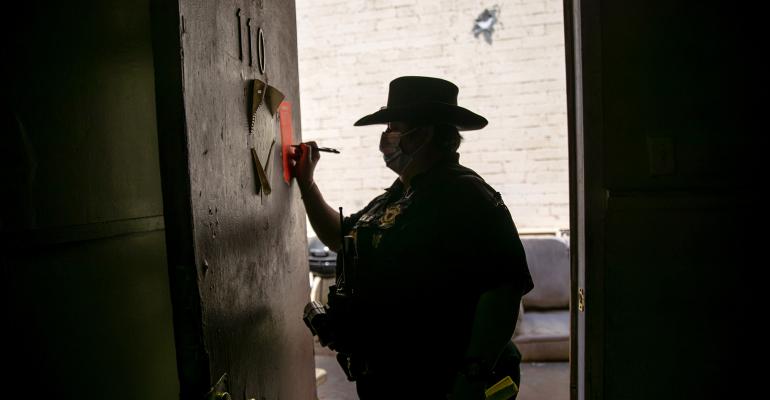 “We have to get back to the basic problem that many of these tenants simply don’t have the income to pay the rent,” said Barry Zigas, senior fellow at the Consumer Federation of America.

(Bloomberg)—President Joe Biden’s plan to extend a federal ban on evictions is a stopgap that doesn’t go far enough to avert a crisis, according to housing advocates.

Renters owe about $70 billion, according to Moody’s Analytics. The $25 billion that Congress approved last month as part of an emergency stimulus package won’t be enough to prevent ballooning distress for both tenants and their landlords.

As part of a package of executive orders Biden planned to sign Wednesday, he will ask the Centers for Disease Control and Prevention to delay expiration of an order barring landlords from pushing out some tenants for nonpayment of rent.

While the action was applauded by housing advocates, there were calls for a more comprehensive solution that will require action from Congress to prevent a wave of evictions.

“Without this action by President Joe Biden, millions of renters could have lost their homes this winter,” said Diane Yentel, president and chief executive officer of the National Low Income Housing Coalition. “But extending the eviction moratorium is, on its own, insufficient to protect renters during the pandemic.”

Concerns about evictions have bubbled up since the pandemic hit the U.S., forcing businesses to close and costing millions their jobs as social-distancing battered the economy. While various state and federal moratoriums have staved off a crisis, unpaid rent bills have mounted.

Biden planned to ask the CDC to extend the eviction moratorium, set to expire at the end of this month, through at least March 31. It was enacted to slow the virus’s spread, but has been criticized by housing advocates because of lax enforcement and loopholes that have opened the way for landlords to throw some tenants out.

One potential next step for Biden would be strengthening the CDC eviction moratorium through “uniform implementation and enforcement nationwide,” said Emily Benfer, a professor at Wake Forest Law.

Biden has called on Congress to provide an additional $30 billion to help struggling renters and landlords.

“We have to get back to the basic problem that many of these tenants simply don’t have the income to pay the rent,” said Barry Zigas, senior fellow at the Consumer Federation of America. “Not allowing landlords to evict doesn’t solve the problem -- it just pushes it into the future.”

--With assistance from Joe Light.