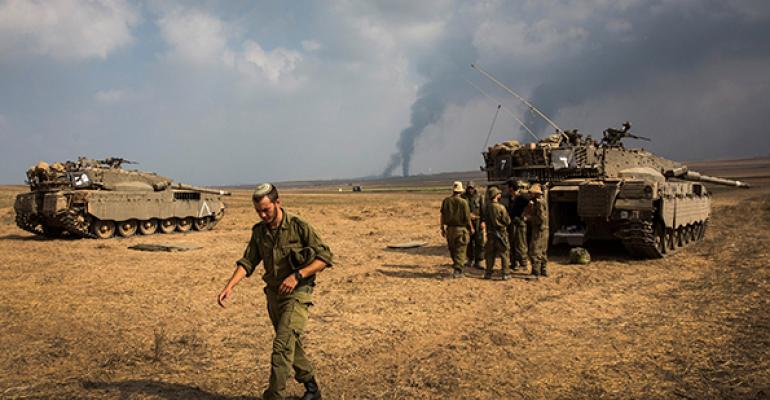 <p>Israeli soldiers stand near their tank while smoke due to airstrikes and shelling rises from the Gaza Strip.</p>
News

The World is in Crisis … the Markets are not

Markets have been gyrating for the past months in the face of a wave of geopolitical crises. But the chance of any of these crises dramatically altering the behavior of markets beyond the short-term is very, very slight.

Over the past few months, geopolitical crises seem to have proliferated. First, in March, long-simmering tension between Russia and the Ukraine metastasized to a full-blown crisis after the government of Ukraine was toppled by a popular revolt. That then led to the Russian annexation of Crimea, which was followed by sanctions imposed by the Western states, armed conflict between Russian separatists and the Ukrainian government in eastern Ukraine, and even more sanctions.

Then, in June, we witnessed the sudden eruption of another brief, intense war between Israel and Hamas-controlled Gaza, which saw daily scenes of bombs and missiles and reports of death and mayhem. That coincided with a rapid breakdown of order in northern Iraq, as the violence from the Syrian civil war at last spilled over in the form of the radical Sunni group ISIS, which swept through northern Iraq on the heels of the almost-complete disintegration of the Iraqi army.

And these were only the three crises that received the most attention. Also during these months, Libya teetered on the brink of a new collapse. While the country has hardly been a paragon of stability since the toppling of Qaddafi, the new round of fighting between various factions has reached a dangerous level. Nigeria faces its own insurgencies. If these regional wars were not enough to unsettle, the outbreak of the Ebola virus in West Africa added yet another element of uncertainty and potential havoc.

On the face of it, this would seem to be an unsettled time. Senator John McCain recently remarked that the world is "in greater turmoil than at any time in my lifetime," a sentiment that appears to be widely echoed.

Much of the market discussion in turn has begun to revolve around these crises. Almost daily on financial news channels, investor letters, and trader chatter, the overhang of geopolitics forms the backdrop to the discussion of where markets are heading. The line "markets sell off on geopolitical concerns" has been repeated ad nauseum over the past months.

It is not at all clear that the world today is particularly unstable. In fact, it is impossible to find a period over the past century -- let alone the vast sweep of human history -- that was free from wars, civil wars, conflict, disease, and chaos. And you can easily find times in the past 50 years that were more volatile.

The question we should be asking however is one that isn't being asked enough: Does any of this really matter for financial markets? Are these geopolitical crises bona fide market events or are they just noise that may shape daily movements in the absence of other compelling information? The answer, resoundingly, is that these events are almost always entirely noise that has little effect on the fundamentals and marginal influence on the behavior of stocks and bonds.

If we look at how markets have behaved during a series of geopolitical crises over the past 50 years, we find a startling pattern: even if there is an initial sharp reaction, within a few months, it is as if nothing happened. Yes, after the outbreak of the First Gulf War with the Iraqi invasion of Kuwait in August of 1990, the S&P 500 was down almost 10% a month later. But six months later, it was nearly back to where it was the day before the crisis began. And yes, after the attacks of 9/11, stocks initially plunged when markets reopened the week following, but they quickly stabilized in the face of aggressive central bank action. Even smaller moves followed other selected crises such as the seizure of the U.S. Embassy in Tehran in 1979, and even going as far back to the Tet Offensive of January 1968 when the North Vietnamese launched a sudden and unanticipated multi-pronged attack on U.S forces through South Vietnam.

The absence of a strong and consistent market reaction to geopolitical crises makes for a very strong pattern. It also stands in contrast to the immediate market reactions to such crises and the buzz of commentary and speculation that surrounds each new one. The short-term market reactions suggest that these crises have the potential to spin out of control and become wider. Stocks might sag briefly, and investors might flee to areas of safety such as U.S. Treasuries or gold. But these reactions are very short-lived if they occur at all. And, within a few months at most, usually weeks, whatever trend had been in place prior to the crisis reasserts itself.

So how do we explain the widespread belief that geopolitical instability sets the stage for market behavior? First, there is always the concern of a much wider global contagion that would then impact the earnings of companies and the behavior of institutional and individual investors. All of the crises of the past 50 years have been contained. Even the largest war in 1991 in the Persian Gulf involved multiple countries, but lasted less than two months and never spread instability throughout that region. None of the current crises involve a major world power save for Russia and the Ukraine, and that crisis has yet to morph beyond low-levels of violence, one tragically downed commercial aircraft, and some relatively mild economic sanctions. None of these crises, in short, have yet to directly impact the behavior of consumers worldwide or the bottom line of all but a few companies.

To put it another way, on a fundamental level, none of these crises affect how many smartphones will be sold in Asia, or how much clothing people will buy in North America. None of them occur in a financial center, and hence have not been a contagion for financial markets — save for a short period of concern that they might trigger a financial panic.

The only aspects of markets demonstrably impacted are commodities and commodity production directly affected by the chaos. Many of today's crises take place in areas that also produce oil. We have seen crude oil stay around $100 a barrel even as demand from North America is falling and demand across the globe has been stagnant. Some of that is a direct result of oil production dropping, as it has in Nigeria and Libya, or of fears that it will drop in Iraq, or that sanctions will lead to either a sharp decrease in oil production, oil exports, or natural gas exports from Russia if the crisis deepens.

Other than the effect on the oil market, however, the pattern is clear: geopolitical crises of the sort we have faced and are now facing do not move markets other than briefly and for the very short-term. They are headlines; they are noise. They have not altered the fundamentals of either companies or global financial markets. They have not led to major moves in bond yields.

Yes, the fear and uncertainty that any one of these crises can spin out of control needs to be taken seriously. Just because past crises did not lead to contagion does not mean that current ones will not do the same. But it does mean that we should be very wary of commentary that draws a clear link between crises, uncertainty, and financial markets. These geopolitical issues are real and critical to the world we live in, but they are very rarely market events.