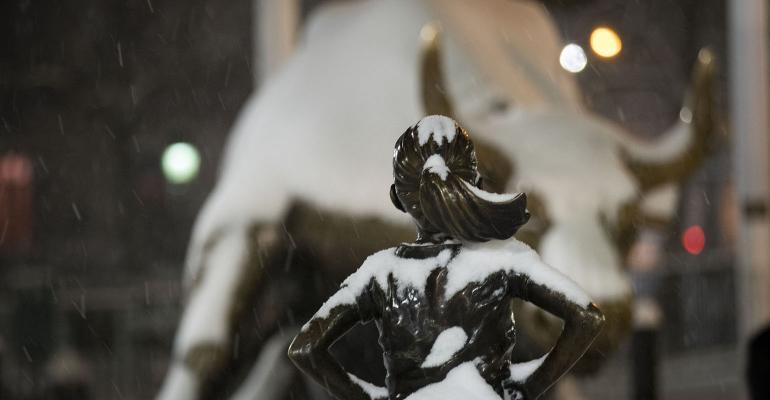 Fearless Girl Is Here to Stay

Fearless Girl, the statue of a young girl erected by State Street Global Advisors last year near Wall Street’s Charging Bull, is becoming permanent. The City of New York and State Street are in negotiations regarding the future of the statue. The statues are considered to be inseparable from each other, and the main issue is whether to keep them in their current location or relocate and redesign them, according to Adweek. Although the statue only cost $250,000 to make, it generated more than $7 million in free marketing for State Street in just the first sixth months of the statue’s placement. 2017 was a record year for charitable donations, with Fidelity Charitable giving $4.5 billion across more than 1 million donor-recommended grants to nearly 127,000 nonprofit organizations, according to the firm’s 2018 Giving Report. The appreciation of cryptocurrencies, such as bitcoin, was a large driver for giving, the firm said. It received nearly $70 million in cryptocurrency, 10 times the amount given in 2016. “Fidelity Charitable’s ability to accept cryptocurrency donations allowed cryptocurrency holders to take advantage of the surge in appreciation to benefit charity,” the report said. “By donating these assets, the donors could eliminate the significant capital gains taxes on the appreciation while giving the full fair market value to charity.”

Heirs Don’t Want the Family Business; They Want the Cash An overwhelming majority of heirs to a family business (82 percent) don’t want to inherit the business or have anything to do with it. They would rather inherit the cash from the sale of the business, according to UBS' Q1 Investor Watch Report. That is driving a number of business owners to sell; 89 percent said they won’t pass a business to heirs because the inheritors aren’t interested. Meanwhile, only some owners (21 percent) said they won’t pass a business on because the heirs were unqualified. More than half of business owners polled also expressed concern that inheritors of a business would turn around and sell it to someone outside the family, squander the profits or fight over the money.