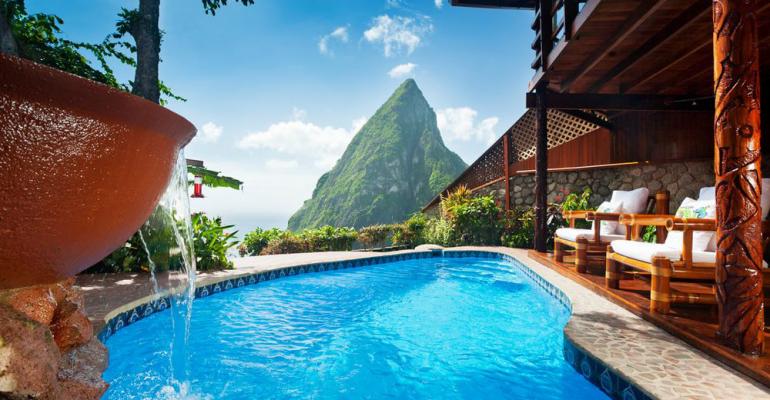 Provided guest are not in need of medical attention, resort operators are offering the opportunity to self-isolate on their dime.

(Bloomberg)—On Jan. 12, the Centers for Disease Control and Prevention announced a new requirement that air travelers arriving in the U.S. from international destinations produce a negative PCR test or a medical letter stating they are free of Covid-19 following an infection.

But what happens if you test positive while on vacation?

The U.S. government won’t allow you onto a commercial flight until you’ve fully recovered, so hoteliers across the Caribbean are stepping in with an attractive insurance policy: free rooms. It’s a bid to salvage the business they’ve rebuilt since reopening borders in summer and fall 2020.

Provided that you’re asymptomatic and not in need of medical attention, they say, you’re welcome to self-isolate on their dime until you’re permitted to go home.

At Ladera, a lush, eco-friendly, all-inclusive in Saint Lucia, a two-week quarantine could translate into $12,600 of complimentary room nights, during which you’d bunker down in a villa with a plunge pool. Within the stately sanctuary of Rosewood Baha Mar, which reopened in Nassau, the Bahamas, on March 4, you might be confined to a $1,565-per-night suite—costing the hotel nearly $22,000, before you factor in also-covered (and mandatory) room service orders from the in-room dining menu.

It’s a steep financial risk should there be an outbreak on a property. But it’s a calculated one aimed at recapturing business from travelers who are more afraid of getting stuck than of getting sick.

When the Maldives reopened its borders in July, one of its top resorts, Soneva Jani, offered to comp a two-week quarantine for guests who get infected during their Indian Ocean holiday. The hotel’s medical team has been trained to care for patients with either asymptomatic or mild cases; a speedboat whisks anyone requiring more critical care to a hospital on a neighboring island.

“We remind guests to ensure that they organize appropriate travel insurance ahead of their visit,” the hotel’s website says.

At the time, the idea was revolutionary. If you’ve gotten Covid, where better to ride it out than in a $2,300-a-night overwater bungalow with staff on-hand to provide alfresco movie screenings and special meals on your patio.

Now hotels in the Caribbean and Mexico are following suit with nearly identical policies.

Nobu Hotel Los Cabos not only will arrange complimentary pre-flight Covid tests for guests who booked at least a three-day stay, but should they come up positive—and remain asymptomatic—the hotel will allow them to quarantine for free in one of its minimalist, desert-inspired rooms for up to 14 days. Nobu includes the cost of medical-assistance insurance in its nightly rates, so if the illness progresses, guests will have coverage for local hospitalization.

Ladera, in Saint Lucia, has set aside three of its 37 cliffside suites for anyone who may need to isolate. Meals from the resort’s restaurant, plus non-alcoholic beverages, are included in the tropical quarantine.

On Feb. 22, the three hotels comprising the Baha Mar resort in the Bahamas collectively upped the ante with their Travel with Confidence program. If you test positive for Covid-19 ahead of your return to the U.S., you’ll be upgraded to a suite with a $150 daily food and beverage credit per person to put towards grilled rib-eyes, fish tacos, and sorbet mimosas.

The Bahamas already requires all incoming travelers to have insurance that will cover potential quarantine expenses, but this separate initiative from Baha Mar means being able to avoid the red tape of insurance claims altogether.

If the additional time away is too much (guests are still confined to a room, after all), or if having access to the U.S. health-care system is more desirable, a special arrangement with the CDC is allowing the resort to charter private flights—also complimentary—for asymptomatic, positive-testing guests to return to the U.S.

The Cost of Confidence

Graeme Davis, Baha Mar’s chief executive officer, expects these offerings to cost no more than 1% of the resort’s current revenue—what he considers a negligible operating expense. His reasoning? After spending hundreds of thousands of dollars to administer more than 40,000 tests since reopening in December, Baha Mar’s positivity rate has been just .002%, or two per 1,000.

“Since launching this program, there’s been a significant increase in bookings, both short-term for March and for June and July,” Davis says, adding that advance bookings across the island resort are on pace with pre-pandemic numbers. By comparison, the industry-wide global occupancy average has hovered from 30% to 40%, according to industry analyst STR.

According to Ladera’s general manager, Christian Gandara, the hotel has not yet had a guest test positive. So far, the policy has made money in increased bookings. Soneva, meanwhile, has quarantined about a dozen guests since July—running to an estimated $386,000 in room nights.

Whatever the number, it’s the cost of consumer confidence. Henley Vasquez, CEO and co-founder of Passported, a luxury trip-planning agency that focuses on family travel, says that the major concern among her clients right now isn’t getting sick but getting stuck abroad if they do.

“They want to know what happens if they catch Covid-19 outside the country,” she says. That may be especially true of vaccinated travelers, who run little risk of developing serious illness from the coronavirus but who may still be able to test positive.

As a result, Vasquez explicitly asks hotels about their contingency plans before she books a client, and has found that all luxury properties—whether or not they’re advertising it—have something in place.

“Now that Americans have to get tested before they can go home, a hotel can’t afford not to have a procedure in place,” she says. The difference in policies, she says, boils down to who’s paying for what.

Still, since the provision at many of these properties applies only to those with zero symptoms, travelers must consider the potential risk to themselves, as well as those in the community they’re visiting. Local hospital systems in the region are small and often heavily burdened should symptoms become worse. Even travelers who believe themselves to be immune or who think Covid might be no worse than the flu would be wise to have a Plan B in place—such as “medevac” insurance that would airlift a seriously ill passenger to a hospital of choice.

For Lawrence Norman Tuck, general manager of the Nobu Hotel in Cabo, shouldering the quarantine costs was a no-brainer. The January announcement spooked his clients in a palpable way, leading to last-minute cancellations and a slowdown in new bookings. Offering free quarantine stays, he reasoned, would be the most effective way to stop the bleeding.

A few weeks in, his reasoning has borne out: “Guests tell us that one of the reasons they’ve decided to stay is because of this program,” he says.

Tight border protocols, such as requiring a negative PCR test result and a “health visa” for entry into the Bahamas, has made Baha Mar’s offerings possible, says Davis.

“If I were a resort in Miami Beach, for example, and I wasn’t doing any testing—and there’s no requirement for testing to come in—this Travel With Confidence initiative would not be a good investment.”

To contact the author of this story: Chadner Navarro in New York at [email protected]