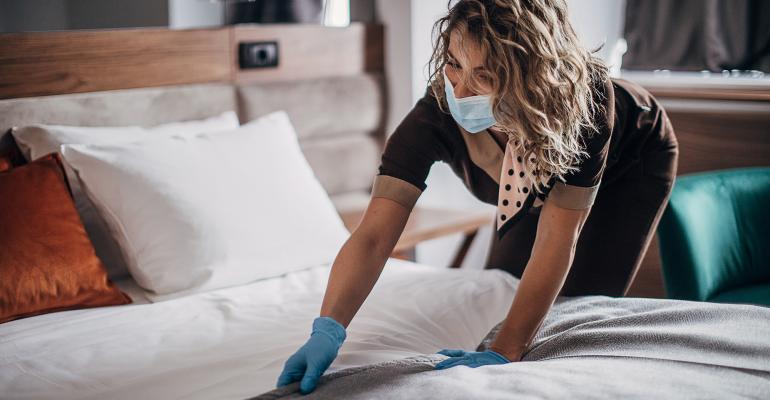 The new spikes in COVID-19 cases in many U.S. markets has derailed a nascent recovery in the hospitality sector.

Just a few weeks ago, the hotel business seemed to be on the mend. More people were checking into hotel rooms as many states across the U.S. loosened restrictions meant to slow the spread of the coronavirus.

The recovery seemed to come just in time. The percentage of hotel properties that had fallen behind in their mortgage payments had already sharply increased.

But tens of thousands of people have now tested positive for the novel coronavirus every day in the first weeks of July, setting new records across the Southeast and Western U.S. That’s brought a new blow to the hotel sector.

“The number of COVID-19 cases has increased dramatically. It has led to leisure travelers not going on trips or not staying overnight if they do travel,” says Jan Freitag, senior vice president for STR.

The recovery that stopped

Months after the U.S. economy ground to a halt in an effort to stop the spread of the novel coronavirus, the number of new cases shrank in May and early June.

As more states loosened restrictions created to slow the spread of the virus, the daily occupancy rate for hotels rose back up to an average of 44.2 percent over the 28 days that ended July 4, according to data from STR. That is much better than 22.7 percent, which was the average occupancy rate over the 28 days that ended April 17. However, the recovery for hotels still had a long way to go before that rate matched 72.4, the rate the year before, when the U.S. economy was still strong.

Even this early summer recovery left the hotel business in a deep hole compared to prior years, says Jamie Lane, senior director of research for CBRE Econometric Advisors. The average U.S. hotel was not projected to exceed their 2019 net operating income levels in until 2024, according to CBRE’s June 2020 Hotel Horizons report.

That recovery already seems to be vanishing. The number of new cases of people infected by the coronavirus increased dramatically in the end of June.

“Governors and mayors have rolled back openings and implemented more strict procedures. The increase in cases will have a negative impact on tourists, even in drive-to destinations,” says Freitag. “You can already see it in Florida.”

The number of coronavirus cases discovered in the state of Florida rose quickly in the last weeks of June and continued to set daily records in the first weeks of July.  As a result, occupancy rates fell in 11 of Florida’s 13 markets in the week that ended July 4.

In contrast, the number of new coronavirus cases found each day in New York state continues to shrink, despite widespread testing. At the same time, the average occupancy rate only declined in two of the state’s eight markets in the week ending July 4 compared to the week before. New York also has implemented mandatory quarantine periods for travelers from the most-affected states.

Hotels already on the edge

Many hotel properties had already been pushed to the limit by the crisis.

The overall lodging delinquency rate had already increased to 19.13 percent in May from 2.71 percent in April, according to analysis by Trepp.

This amounts to roughly $16 billion worth of loans, which were then marked as delinquent and were more than 30 days late on their payments.

Most of the hotels that remained open in 2020, despite the crisis, are generating enough revenue to cover their direct operating costs like labor and utilities. However, that does not include the costs that owners have to pay, including mortgage payments, property taxes and insurance, according to CBRE.

To break even financially, limited service hotels are likely to need to be at least 40 percent or 50 percent occupied, according to a survey of hotel profit and loss statements by STR. The occupancy rates in the 40 percent range recorded by STR in June were barely enough to for many hotels to tread water. As occupancy rates drop again, many hotels are likely to struggle to cut expenses to continue to operate.

“It is all about cash conservation,” says Freitag.