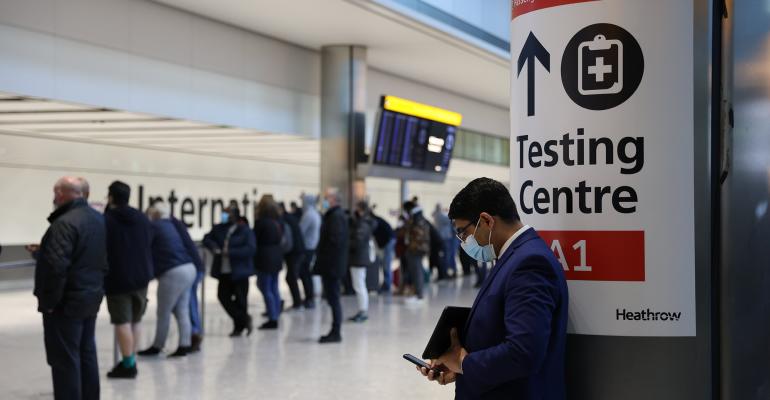 (Bloomberg) -- Rapid and still-evolving border restrictions in response to the omicron variant have submerged air-travel demand yet again, throwing a long-awaited recovery into uncertainty.

The emerging coronavirus wave has put airlines under even more pressure as they navigate rules that vary by country and are being revised daily as more information about the strain comes to light.

Carriers slashed 151,000 flights globally through Feb. 1 in the first week the new variant appeared, or 2.9% of the schedule as it stood on Nov. 24, according to data compiled by BloombergNEF.

The data offers an early view into the scale of damage omicron has caused so far. Airlines have made steep cuts for this week, but held back further on in the calendar -- suggesting a higher number of cancellations are in store as the variant is identified in more countries.

Aviation executives who had recovery in their sights less than two weeks ago called for a more uniform response.

“Omicron just brings to the fore that we are not as coordinated as we should be,” said Jeffrey Goh, chief executive officer of the 26-member Star Alliance, whose members include United Airlines Holdings Inc., Singapore Airlines Ltd. and Air China Ltd. “International leadership is still wanting.”

Researchers and governments are racing to get a grip on how deadly omicron is, how easily it spreads and how resistant it is to current vaccines.

In the meantime, governments have tightened entry rules, banned flights and reintroduced quarantine measures to slow the variant’s spread.

Requirements vary and can change rapidly, making air travel a befuddling proposition for those in a position to consider it. Over the weekend, the U.K. added a pre-flight test requirement for all incoming travelers, while the U.S. said it’s reviewing policies on a daily basis. Japan backtracked on a plan to stop inbound flight reservations.

One deterrent to travel is the possibility of entry rules changing mid-flight, leaving passengers stuck at their destination and perhaps not even allowed back home.

“Inevitably there’s going to be an immediate short-term setback,” Goh said in an interview last week.

Omicron has reached more than three dozen nations after first being detected in southern Africa. The exact nature of the threat may not be clear for weeks, but governments have rushed to impose clampdowns after many were ambushed by the delta variant months ago.

Asia has been hardest hit, where a budding ramp-up in flying has been undone. Eastern Europe, where infections are surging, has also seen an impact, according to BloombergNEF.

Western Europe and the U.S. have held up better, and even sub-Saharan Africa has escaped the worst impacts, with carriers such as Delta Air Lines Inc. and Virgin Atlantic maintaining flights.

South Korea enacted a 10-day quarantine and is weighing curbs on domestic activity, and while Singapore is keeping most of its vaccinated travel lanes open, it has put the brakes on any new ones.

Airline shares have zig-zagged over the past two weeks. They rose Europe on Monday, after Anthony Fauci, U.S. President Joe Biden’s chief medical adviser, said on Sunday that he was encouraged by early signs that omicron infections weren’t that severe -- easing concerns over the variant causing further disruption for the airline industry into next year.

Seasonal travel spurts are approaching, with the Lunar New Year holiday and the Winter Olympics in Beijing in February, followed by Easter in mid-April and on to summer in the northern hemisphere.

“Pent-up demand will come back, it’s just that there needs to be clarity on what those travel rules and restrictions are,” said Goh, adding that the confused response to omicron “does not necessarily bode well for the next variant.”

--With assistance from Siddharth Philip, Anthony Palazzo and Christopher Jasper.