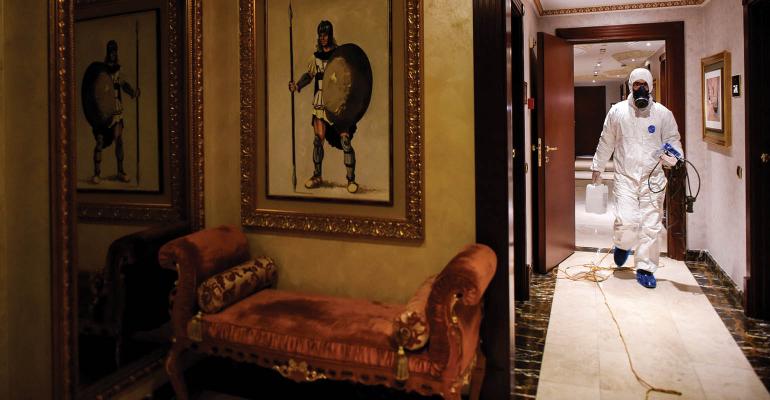 Hotel Occupancies Have Cratered. What Happens Next?

The recovery hotel experts had hoped to see in June now seems more likely to potentially arrive in July or August.

The good news for the hospitality sector is that occupancy rates likely won’t fall in the coming weeks. But that’s only because occupancies have already dropped so low.

Less than a quarter (22.6 percent) of the hotel rooms in the U.S. were occupied in the week ending March 28, according to STR. That’s down from 80.3 percent at this time last year.

“Occupancy rates in the U.S. will likely not get much worse, partially because they can’t,” says Jan Freitag, senior vice president for STR, based in Nashville, Tenn.

Hotel properties are likely to operate at a fraction of their capacity for months, as most potential guests cancel travel plans and stay home to slow the spread of the novel coronavirus. The first numbers are showing how small this fraction is likely to be, as hotels decide whether to continue to operate or close their door and reopen once the crisis has passed.

Many hotels are still operating—but not all. Many full-service hotels, which typically include restaurants and convention space, have shut their doors and laid-off staff with the conference business coming to a standstill.

“They have a high fixed cost—they take a lot of labor,” says Jamie Lane is senior managing economist of Econometric Advisors and CBRE Hotels Americas Research. “Properties have hard decisions to make on whether to keep that staff on or let it go. Labor is hard to find.”

In the hotels that are still open, occupied rooms are providing shelter to an odd mix. “Anecdotally, we’ve heard that there are some responders—people who work in hospitals and don’t want to go home for fear of infecting their families,” says Freitag.

Hotels located near highway locations are also providing rooms to truckers who are still hauling goods back and forth across the country. Occupancy rates at these hotels average just a few percentage points higher than the national average, says Freitag. RevPAR for the week of March 21 fell 44.7
percent, the smallest margin among location types, according to a report from Marcus & Millichap. Occupancy decreased 21.8 percentage points to 37.8 percent.

Extended stay hotels are also renting more rooms, with occupancy rates roughly twice as high as the hotels on average, according to STR.

There are also differences between urban and suburban hotel metrics, according to Marcus & Millichap. "During the week that ended March 21, the average urban hotel occupancy rate fell to 17.8 percent, down 58.4 percentage points compared with the same week a year ago. The average RevPAR dropped 85.1 percent," according to the report. For suburban hotels, meanwhile, "the average occupancy rate fell 36.6 percentage points year over year to 33.6 percent, while RevPAR declined 65 percent."

The frozen U.S. economy has been especially hard on hotels in the places favored by international travelers. On the island of Oahu, Hawaii, for example, fewer than 10 percent of hotel rooms were occupied in the last week of March, according to CBRE. The economic freeze is also especially damaging for hotels located in markets located in markets like Phoenix that are especially dependent on the spring travel season.

“Phoenix [normally] sees 40 percent of its revenue in March, April and May,” says Lane.

The timing of any recovery depends on the coronavirus. Experts expect travel restrictions won’t ease until eight to 12 weeks after the number of new infections peaks and begins to fall. That certainly hasn’t happened yet.

As the number of COVID-19 cases rises and events scheduled for summer 2020, like the Democratic National Convention, continue to be cancelled and or postponed, the recovery hotel experts had hoped to see in June now seems more likely to potentially arrive in July or August.

“The industry is going to take a more U-shaped recovery than a ‘V,’” says Lane. “There is a quick downturn, then a plateau and a gradual recovery over the next 12 to 18 months.”

A recovery for hotels would likely begin with domestic travel, with corporate travel following over time and group travel being the last to come back, says Lane.

During this crisis, it’s still far to soon to know how many hotels might fall behind in payments or even be driven out of business by the frozen economy. The $2 trillion federal aid package passed by Congress should help, but it’s not yet clear how quickly or generously that money will flow to hotels. There is also increasing talk that another rescue package may be necessary soon.

“In the meantime, most loan payments are due in the first five days of the month,” says Lane.

Market watchers do expect delinquencies on hotel loans to rise, although the effect will likely be delayed. Some borrowers can continue to pay loans with cash on hand while in other situations lenders or special servicers are likely to allow some extensions to borrowers.