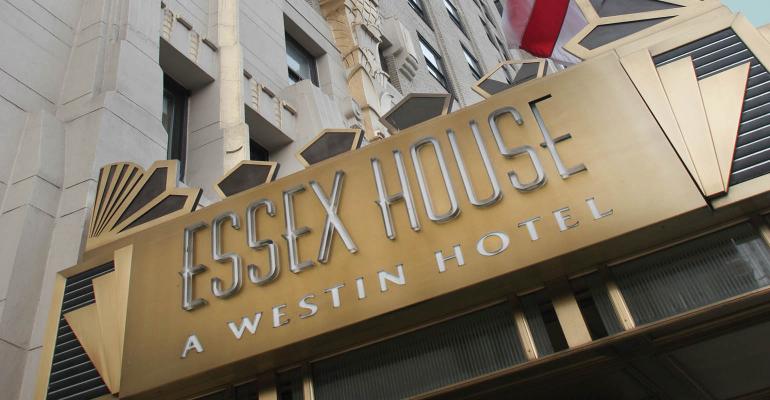 The hospitality sector is notoriously the most volatile of real estate asset classes. Business and leisure travel trends are highly correlated to broader economic conditions. And the sector does not have the benefit of long-term leases to help soften the blow of cyclical swings.

The effects of that fundamental nature of the sector are evident in our first exclusive research examining hotel investment. As a result, while the numbers are bullish and generally consistent with what NREI has found for other property types, that level of optimism is more muted. Moreover, the rise of third-party room and home sharing apps like Airbnb and VRBO is a growing concern for the sector and its outlook.

Overall, 76.9 percent of respondents pointed to those services as having an impact on the sector. Respondents had a lot of thoughts on these services in open-ended responses as well.

“There will be continued pressure on occupancy for extended stay and all-suite hotels from Airbnb, etc.,” one respondent wrote. Another added that a challenge for hotels is that owners will “have to differentiate from what can be found on Airbnb and VRBO.”

And one respondent expressed the opinion that legislators will help ease the pressure, writing, “Cities will ‘push back’ with Airbnb/VRBO regulation, reducing its effect on hospitality sector.”

In addressing these, a respondent wrote, “Hotels need to adapt to the changing needs of the travelers, creating convenience from both amenities and services, flexibility on duration and styles of stays and access to tailored needs.”

Another added that, “the lines have become blurred between business and leisure travel, with a number of individuals adding a leisure component to their business trip or conducting some business while on vacation.”

A final shared concern identified in the survey is that an overwhelming majority of respondents (83 percent) expect operating expenses to rise in the next 12 months. They identified labor costs, renovations, maintenance and upgrading amenities in open-ended responses as line items that will drive expenses in the coming year. Only 7 percent of respondents expect expenses to fall.

Interest in the inns

Respondents to the survey estimate hospitality cap rates as being a bit lower than the most recent market data suggests. The survey asked for overall cap rates nationally. About half of respondents identified ranges from 6.6 percent and above (broken into 0.5 percent chunks). The other half said cap rates were 6.5 percent or below, producing an overall average cap rate of 6.4 percent.

That’s considerably higher than CBRE’s estimates for cap rates for the first half of 2019, which placed rates for all CBD hotels at 8.01 percent and for suburban hotels at 8.55 percent. Broken down by sub-sector, CBRE’s numbers show luxury hotels in both CBDs and suburbs as having the lowest cap rates, at 7.05 percent and 7.61 percent, respectively.

Dovetailing with those numbers, the NREI survey found that respondents are most bullish about the luxury sub-sector going forward. Respondents were asked to rate the outlooks for eight different segments of the hotel sector (ranging from limited service to luxury, among others) on a scale of one to 10. Luxury (7.3) topped the list, followed by upper upscale (7.0) and selected-service (7.0). However, there wasn’t a dramatic range between the top and bottom sectors. Limited service came in the lowest, but its score of 6.5 was only 0.8 below the top spot.

One sign of that continued strong interest is the frenzied bidding for a portfolio of high-profile luxury hotel properties owned by Anbang Insurance Group (see full story on p. 16). More than a dozen investor groups have stepped forward to bid on Anbang’s portfolio of 15 hotel properties, which include the Westin St. Francis in San Francisco, the Loews Santa Monica Beach Hotel, the JW Marriott Essex House in New York City and the Four Seasons in Jackson Hole, Wyo. It was eventually purchased for $5.8 billion by south Korea’s Mirae Asset Management Co.

“The fact that a plethora of potential buyers has emerged to bid for Anbang’s properties reveals that the U.S. hotel market remains strong, even this far into the cycle,” Robin Trantham, a consultant with research firm CoStar Portfolio Strategy, told NREI. “Transaction volume in the nation’s 54 largest metros totaled more than $44 million last year, the largest total this cycle outside of 2015’s.”

And there are more deals coming. Kohlberg & Co. is reportedly exploring options for its Interstate Hotels & Resorts Inc., including a sale that could fetch about $1 billion. In all, hotel sales volume is expected to match 2018 levels. Investors spent $43.1 billion on hotel acquisitions in 2018—a 54 percent increase from 2017, according to data from research firm Real Capital Analytics.

Looking ahead, just more than half of respondents (55 percent) expect cap rates to increase for hospitality properties. Another 33 percent say they will remain flat, while only 12 percent expect further decreases in cap rates.

On the capital markets side of the equation, respondents don’t expect much movement. A majority of respondents (51.6 percent) said the level of equity targeting the sector has remained the same, while a plurality (44.3 percent) said the level of debt is unchanged from 12 months ago. About one-fifth of respondents said equity has been more widely available (20.5 percent) and one-fourth felt that way about debt (25.5 percent). In contrast, 19.2 percent said that equity was less available than a year ago, while 22.2 percent expressed that sentiment about debt.

On interest rates, there is less consensus, especially in the wake of the Fed’s first interest rate decrease in more than a decade. Looking ahead, 23.5 percent of respondents expect interest rates to rise, 42.8 percent expect them to remain flat and 33.8 percent see them decreasing. (Notably, the survey was fielded just prior to the Fed’s move to lower rates.)

Most interestingly, the pool of respondents to the NREI survey doesn’t plan to do much buying or selling in the sector in the next 12 months, which is a divergence from our findings on other property types. In all, 70 percent said they plan to hold, while only 18 percent say the plan to buy and just 11 percent intend to sell. When it comes to other sectors, our surveys generally indicate a higher interest in buying and selling, with fewer respondents saying they plan to hold.

One potentially worrisome finding in the survey is that there is some concern about overdevelopment. In all, 38 percent of respondents said “too much” development is occurring. While that is not a majority, that level of concern is greater than what our surveys have found for other property sectors. However, 42 percent of respondents characterized the level of development as being the “right amount” and 7 percent even said there is “too little” development occurring.

One respondent wrote in an open-ended answer, “Some markets are becoming overbuilt, which is causing obsolescence in the older product. The older product may become candidates for redevelopment/adaptive reuse due to decreases in average occupancy rates in certain markets.”

The view on revenue per available room (RevPAR) is more optimistic. In all, 55 percent of respondents expect RevPAR to increase in the next 12 months vs. 28 percent who said there will be no change and 17 percent that foresee a decrease. Expectations on average daily rates (ADRs) were even better than that, with 71 percent seeing ADRs rising in the next 12 months, compared with just 10 percent expecting a decrease and 19 percent that said ADRs will be flat.

Respondents had positive views of most regions. When asked to rate the strength of each region on a scale of one to 10, the West (7.6) and South (7.5) came in the strongest, with the East (7.1) a few ticks below and then a larger gap for the Midwest (6.2). Those scores largely mirror how respondents have rated regions for property types in other sectors in NREI surveys, with the exception that the Midwest’s score is a bit lower for hotels than it is for office, industrial, multifamily or retail.

U.S. hotels posted average revPAR growth of 16 percent from 2014 to 2018, and, of the 12 areas that outperformed this growth, 11 were either in Western or Southern areas, according to a Marcus & Millichap report. Investors have already been noticeably attracted to these areas, as close to 50 percent of transaction volume in the hospitality sector in 2018 occurred in either Western or Southeastern markets, according to a Cushman & Wakefield report released earlier this year.

With additional reporting by Bendix Anderson and Sebastian Obando.