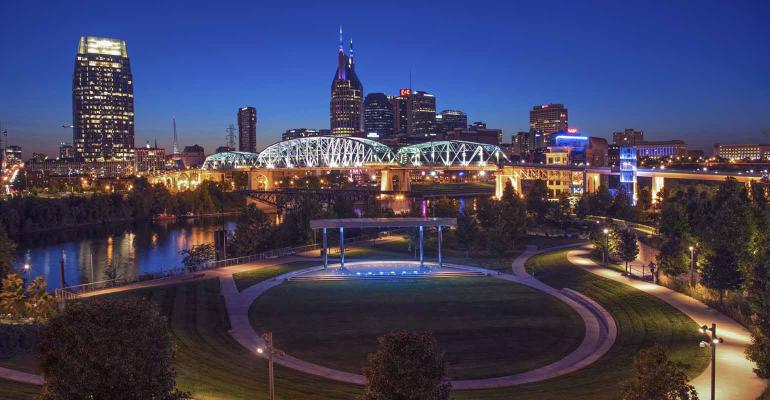 Booming Nashville Is Being Transformed by Luxury Tourism

Over the next three years, Nashville is expecting an influx of five-star hotel brands that include 1Hotel, Edition, Conrad, and Ritz-Carlton, plus a full renovation of the city’s grand dame, The Hermitage.

(Bloomberg)—Stand atop any of Nashville’s rooftop bars at sunset and you’ll find a gleaming new skyline composed largely of … hotels.

There’s the 25-floor Grand Hyatt anchoring a new mega-development called Nashville Yards; a 21-story Luxury Collection property called The Joseph; a JW Marriott with 533 rooms over 810,000 square feet and 33 floors; and the Thompson, which casts shadows over the low-rise Gulch neighborhood. All are new constructions, most since 2020. And they don’t include smaller-size openings with outsize personalities, like the megawatt Soho House or the Graduate Hotel, which is right by famed hot-chicken joint Hattie B’s and brims with Southern charm.

In a sign of how fast things are moving, it cost $191 million to develop the W, in a mirrored tower whose 346 hotel rooms are partially cantilevered over a 26,000-square-foot retail complex. Only five months after it opened in October 2021, it sold to new ownership—for $328.7 million, or $950,000 per room.

Practically every luxury brand is swooping in: Over the next three years, Nashville is expecting an influx of five-star hotel brands that include 1Hotel, Edition, Conrad, and Ritz-Carlton, plus a full renovation of the city’s grand dame, The Hermitage, which first opened in 1910. Perhaps most luxurious will be a Four Seasons, slated to open late this summer in a 40-story tower with 235 hotel rooms and 144 residences, all with panoramic floor-to-ceiling windows and access to a seventh-floor pool deck that could have been transplanted from Beverly Hills.

Dean Stratouly, who co-developed the Four Seasons as president and chief executive officer of hospitality-investment firm Congress Group, calls Nashville a better version of Austin in terms of its economic outlook. “We first started looking in Nashville around 2016, and I was astounded by what was percolating,” he recalls, pointing to the city’s welcoming tax-base structure, a state government that is aggressive about attracting businesses, and fast-growing infrastructure. Those are among the same reasons that major corporations, including Amazon and Oracle, have recently opened large offices and headquarters here, partially fueling a wave of migration among urban white-collar workers from both coasts.

But for hospitality investors, there are ultra-rare draw cards in addition to all that. Notably, Nashville is within a four-hour flight radius of nearly every major city in the US, including Los Angeles and New York. Data from hotel industry analysts STR shows that Nashville has been among the five best-performing urban markets throughout the pandemic, consistently posting gains to both occupancy rates and average daily prices that have helped buoy numbers nationwide.

And while bachelorette parties make up an outsize share of the city’s tourism reputation, they account only for 1% of tourism revenues; corporate travel, which offers steady business in normal times, represents 40%, giving the city staying power with a wide variety of audiences. Add in the record number of people driving through Tennessee to get to the Great Smoky Mountains, and Nashville is expecting to see more visitors in 2022 than it did in 2019, despite the remaining uncertainty around meetings and conventions.

“Nashville’s [Davidson County] annual hotel revenue in 2022 is projected to be 187% higher than it was 10 years ago,” says Butch Spyridon, president and CEO of the Nashville Convention and Visitors Corporation, who believes there are no signs yet that the momentum is slowing.

The Pivot That Paid Off

Spyridon says Nashville’s growth can be traced back to 2004, when the city shortened its nickname from Music City USA to Music City and started to build a narrative for itself that didn’t rely entirely on country music and Americana.

But the campaign wasn’t just about a streamlined moniker. It earmarked $623 million for the construction of Music City Center, a 2.1 million-square-foot convention center that opened in 2013, and where Nashville has since hosted events from the NHL All-Star Game to the 2019 NFL Draft.

Those events, in turn, have brought a steady stream of visitors to fill the city’s fast-growing number of hotel rooms. “We had 4,200 new hotel rooms open during the pandemic, and another 3,100 are under construction to further strengthen our market,” says Spyridon. In early June, the return of the Country Music Awards saw nearly every hotel at full capacity. “We’ve been on a 12-year roll of positive momentum.”

Of course not all metrics tell the same story; while room counts grew amid the pandemic, the city saw declines in 2020 as did every other destination. Still, the figures for Nashville and Tennessee were not as dire as in other parts of the country.

And unlike most markets, where the influx of new inventory causes rates to dip, Nashville has seen the opposite. “In the first four months of 2022, Nashville city hotel revenue was up by 10.5% compared to the same time in 2019,” Spyridon continues. Business travel has yet to come back fully, but he says projections for the full 2022 calendar year show that “Nashville will sell 900,000 more rooms than in 2019, yielding a 20% increase in hotel revenues.”

Until recently, most of Nashville’s high-rise development was housed within a roughly one-mile stretch of downtown. Among those pushing the boundaries as of late is Soho House, which opened in February in the formerly warehouse-filled Wedgewood Houston neighborhood, five minutes south of downtown on the other side of I-40. Although the area still has an industrial look, it’s been embraced by local businesses—chic coffee shops, art galleries, vintage stores—and an expansive Live Nation base, bringing in a full-time, professional workforce.

Ben Weprin, who holds more than $1.3 billion in Nashville real estate—including the aforementioned location of his own fast-growing brand, Graduate Hotels—was among those who saw Wedgewood’s potential before it was cool. He bought the May Hosier Sock Factory building, in 2015, and immediately flagged it to his friend and Soho House CEO Nick Jones. In 2014, Jones thought Nashville had potential, but it was too early in the city’s evolution for him to pull the trigger. More recently, it was an easy sell.

Now the 97,000-square-foot, four-story Soho House contains 47 hotel rooms, along with a Cecconi’s restaurant, two stages for live performances, and a 74-foot-long outdoor pool. The vibe is low-key but stylish: Even in the middle of the week, it’s busy with people lunching and lounging with laptops, all looking freshly plucked from the brand’s West Hollywood or Brooklyn locations.

This fall in Franklin, 25 minutes south of the city, another property called Southall will open with 62 rooms and 16 cottages set on a working farm—a closer, more affordable, but still plush competitor to perpetually booked-up Blackberry Farm, which is three hours east.

“With Nashville booming nearby, I saw an opportunity,” says Southall’s owner, the former securities trader Paul Mishkin. “We initially toyed with the idea of a B&B, but as we talked to more and more people who lived in the area for years, we were strongly encouraged to go bigger—and that we did!” he says.

As at Southall, most of Nashville’s latest luxury hotels are playing into the city’s newfound reputation as a fancy food hub—not its country music heritage. Jean-Georges Vongerichten has a pair of stunning restaurants at the Hermitage, James Beard award winner Sean Brock has a spot at the Grand Hyatt, and Tony Mantuano (of Chicago’s famed Spiaggia) moved full-time to Music City to run the ambitious, pasta-centric Yolan at the Joseph.

Where boldface chefs thrive, luxury brands follow: Even Kering has said it’s eyeing Nashville for expansion, specifically for its Gucci and Balenciaga stores.

That makes Nashville much more than Music City—and raises the question of how much luxury Tennessee’s capital will be able to support before its identity blurs. Already, the incredible population boom sustained in 2020 has abated, with the city recording a population decline in recent months; according to US Census Bureau data, Nashville lost 11,000 residents in 2021 following a decade of continuous growth.

But the city is looking beyond American work-from-anywhere types. In early June, it announced a six-year, $1.4 billion airport enhancement plan, focusing on the infrastructure that’ll be needed to draw more transatlantic and long-haul flights. In other words, Music City is already charting its next act—on a more international stage.