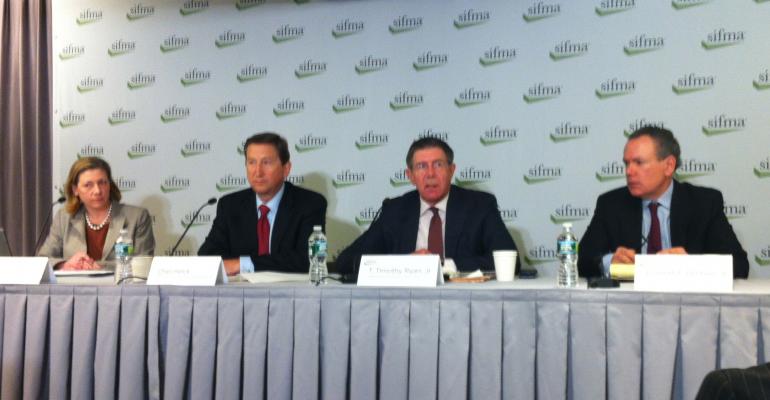 SIFMA expects a DOL fiduciary proposal in the second quarter of this year, renewing the industry’s concern over the possible legislation, which the organization says is contrary to the SEC’s.

While the Securities and Exchange Commission’s fiduciary standard is still up in the air, the Securities Industry and Financial Markets Association (SIFMA) is turning its attention toward a controversial effort by the Department of Labor to institute a more stringent fiduciary standard on advisors working with ERISA accounts. Chet Helck, SIFMA chair and CEO of Raymond James’ global private client group, went as far as to say he believes it’s the most misguided reform facing the industry today.

During SIFMA’s annual State of the Industry press briefing this morning, held just a few blocks from WealthManagement.com’s New York offices, SIFMA leadership discussed many of the same issues facing the securities industry as last year—the Volcker rule, too big to fail, and the SEC’s fiduciary standard.

But SIFMA expects a DOL-led proposal to come around in the second quarter of this year, renewing the industry’s concern over the possible legislation which SIFMA says is contrary to the goals of the SEC.

“The Department of Labor’s attempt to run on a different track than the SEC is in forming fiduciary responsibility on saving for retirement at a time when our country is in the greatest need ever for encouraging savings and investment in retirement plans,” Helck said. “The public clearly needs help, guidance, advice and support for that. Making it more difficult especially to serve smaller investors is counterproductive to the overall objective.”

Before the presidential election, the proposal saw some pushback on the more stringent fiduciary standard for retirement plan advisors, and it was uncertain whether Phyllis Borzi, assistant secretary for the Employee Benefits Security Administration of the DOL, would hold onto her position. But with Obama’s reelection, Borzi is here for another four years, and she has made it her top priority to tighten up the definition of fiduciary under ERISA rules. (Borzi was named one of REP. magazine's Ten to Watch for 2013.)

SIFMA has supported the uniform fiduciary standard of care for brokers and advisors that is being pursued by the SEC. In Section 913 of Dodd-Frank reform, Congress made it clear that you could have dual models under a fiduciary standard—a fee-based and a commission model, said Kenneth Bentsen, Jr., executive vice president of public policy and advocacy at SIFMA.

“That’s the complete opposite of the direction that the DOL is moving in with their initial proposed definition of ERISA, that would in our view eliminated the ability to have a commission-based model for ERISA-type accounts,” he said. Brokers would face operational challenges if they had to deal with two different standards at odds with each other, Bentsen added.

“At the retail level, the operational challenge is where you have a client who has a relationship with their broker where they have multiple accounts,” he said. “They may have discretionary accounts; they may have retirement accounts. And what you have is a situation in one part where you have that broker having to operate under conflicting rules from two different agencies as it relates to the same client.”

The DOL also has a different approach to managing conflicts than the SEC, Helck said. If a client chooses a certain product or service and the advisor discloses all the fees and terms associated with that, under the SEC rules the advisor can carry out that transaction. But the DOL simply prohibits certain transactions and activities, Helck said.

“Rather than saying, ‘You can make this available and if the client agrees to it it’s acceptable,’ they say ‘There are things that you simply cannot offer,’” he said.