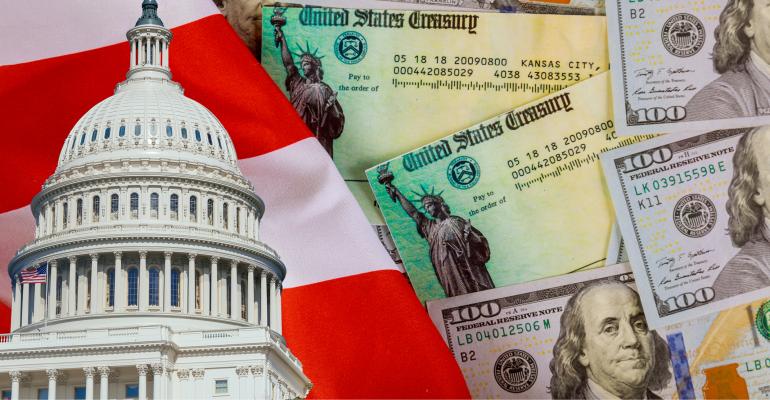 (Bloomberg)—Americans earned an additional $1.1 trillion last year -- the most ever in data dating back to 1930 -- thanks entirely to stimulus checks and other government aid.

Total U.S. personal income rose 6.1% last year to $19.7 trillion as a surge in pandemic-era aid outpaced gains in wages, property values and other sources of wealth, according to the U.S. Bureau of Economic Analysis.

The dollar amount of so-called transfer receipts, which include Covid relief payments, steered income growth in 26 states while increases in other types of personal income led in 25 including the District of Columbia, the preliminary estimates show.

The report illustrates how important government relief programs have been in helping to shore up Americans’ finances as the world’s largest economy recovers from the pandemic. On top of stimulus checks, an additional $498 billion was doled out in state unemployment benefits last year, according to the data.

Personal income growth ranged from 8.4% in Arizona and Montana to 2.4% in Wyoming. Gains were strongest in the West.

For the nation, wages increased 0.3% in 2020, the smallest gain since 2009. Northeastern and Midwestern states that have experienced industrial declines saw the sharpest declines in wages last year.

The new data, published Wednesday, also provides a look at how the pandemic affected state economies by industry. For example, New York’s arts, entertainment, and recreation sector suffered a $7.8 billion loss while accommodations and food services declined by $10.1 billion.