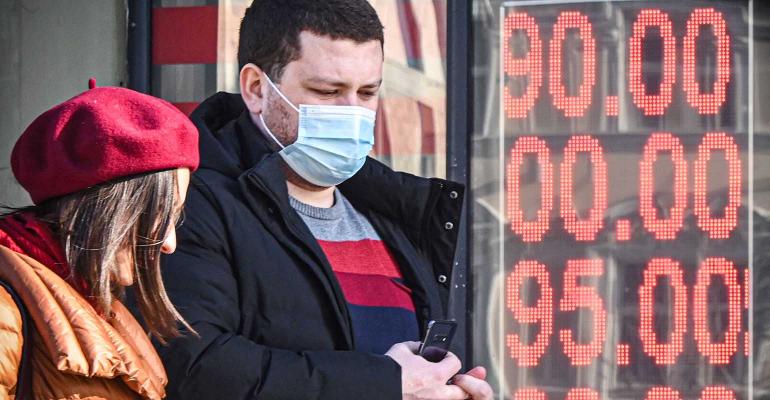 The currency’s collapse, black-listed financial institutions and increasing capital controls are throwing into chaos the financial lives of people who live, work and study globally.

These expats don’t have private jets or wealth managers. But they are accustomed to easy online banking, cheap currency conversions and a steady flow of goods and services between their current outposts and home. With new sanctions — as well as sudden policy changes by Russia and the breakneck drop in value of the ruble — those links have broken down in just days.

“I have some stupid hopes that the currency rate will change, and that the situation will be better,” said Marina Gretskaya, a 32-year-old who moved to London from Russia last year to take a job in communications.

Gretskaya kept a savings account open at Tinkoff, an online Russian “neobank” popular with younger consumers comfortable with online banking. The assets she held there were worth a total of about $7,400 last week. On Monday, the ruble plummeted more than 30% against the dollar. That evaporated more than $2,000 from her savings.

Russia has one of the world’s largest diasporas. Some 11 million people born in the country live outside its borders, according to a 2020 report by the United Nations. That puts it ahead of Syria and China and on par with Mexico in terms of diaspora populations.

Some Russian expats are, notoriously, wealthy. A few fall within the expanding dragnet of more than 100 individuals, entities and their subsidiaries sanctioned by the U.S. and its allies. Yet many have more modest balance sheets. The U.S., for instance, was home to 4,805 Russian students in the academic year that ended in 2021, according to the Institute of International Education. For the U.K., that figure stood at 3,380, according to Britain’s Higher Education Statistics Agency.

Those countries’ sanctions — in addition to those of the EU and other major economies — have banned many financial activities, locked up billions of Russia’s central bank assets offshore and even restricted where Russian nationals can fly.

In reaction, the Bank of Russia more than doubled its key interest rate to 20% and put in place controls on the flow of capital. The Moscow stock market was closed for a third day on Wednesday. At home, Russians have been trying to withdraw as many U.S. dollars as possible, creating huge lines at ATMs.

“It’s going to be quite disastrous,” said Mark Galeotti, an honorary professor at the UCL School of Slavonic and East European Studies. “I don’t know how these people are going to cope economically.”

“He doesn’t care if the oligarchs get squeezed,” Galeotti said. So those with much smaller incomes abroad? “These are not in any way people who can have any bearing on Putin, and Putin is unlikely to care.”

Russia’s invasion has wrought havoc upon Ukraine. Russian forces encircling Kharkiv, a Ukrainian city of 1.8 million, on Monday conducted rocket attacks on a residential district, with reports of dozens killed or injured. About three-quarters of a million people have fled the country into the EU, and the UN projects as many as 4 million will ultimately leave as refugees.

Far from the front line, the international crackdown in response to the war has left Russian expats unsure of what financial services still work and if they do, how much time they have to keep using them.

Irina Belova, 32, moved to Washington, D.C., from Moscow in January 2020 and works in the capital markets department for a mortgage broker. Her family is still in Russia and was hit hard by the ruble drop. The instability and constant imposition of further SWIFT sanctions have left her in a state of uncertainty over whether she’ll be able to help her family.

“I don’t know what to expect,” Belova said. “The situation is worse day-to-day and we don’t know what will be the next step in sanctions. But I’m really afraid that if I will need to send money to my family in Russia, I don’t know if I will be able to do that.”

Maria MacDonald, who co-founded a marketing agency in London and moved there from Russia six years ago, says she’s not entirely sure why her British Barclays card isn’t working at Yandex, which functions something like Amazon.com in Russia. She usually sends food and gifts to her family back home to tell them she’s thinking about them.

She doesn’t know if her usual transactions failed because the U.S. and European powers have committed to remove some Russian banks from the SWIFT messaging system, recently tightened capital controls or something else entirely.

“People are trying to figure out what we’re allowed to do,” says MacDonald.

At work, MacDonald said her U.K.-registered firm prepaid its Russian contract workers a month in advance and asked them to open accounts at banks that aren’t currently sanctioned. She says she’s seen a lot of her friends trying to convert their rubles to either dollars or even cryptocurrencies.

Evelina Lavrova is one of the Russian expats who is considering using cryptocurrencies as a form of payment if she can’t use banks. The 37-year-old moved to the U.S. from Russia in 2019 and now runs a marketing agency for web3 startups in New York City.

“You become a hostage of the political situation even if you do not live in your home country anymore,” Lavrova said.

Lavrova conducts all of her banking though U.S. institutions. Her main concern is whether banks will ban Russian nationals from holding accounts that have been registered with their foreign passports.

“If it happens, we can use cryptocurrency platforms as an alternative,” Lavrova said. “But you can’t pay everything by crypto and anyway need to withdraw money on a debit card or exchange on cash.”

Cryptocurrency exchanges are still trying to figure out their next moves. Bitcoin, which had been lagging behind in 2022, is up more than 15% since late February on an emerging narrative that financial instability in Russia may make the cryptocurrency, untethered from any government, increasingly attractive.