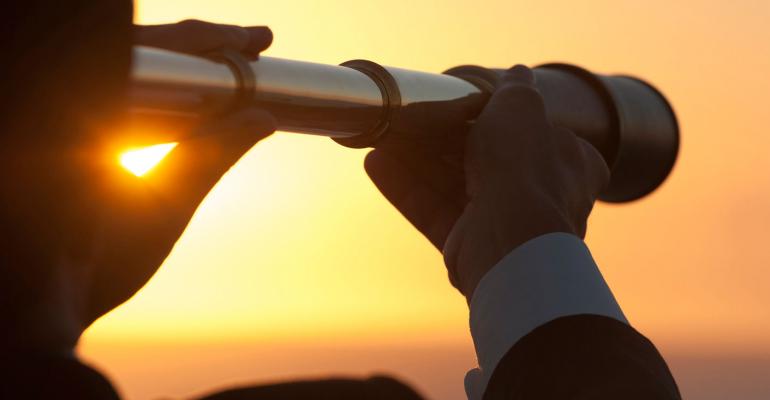 LIBOR Transition to SOFR: Implications for the Senior Loan Market

With no LIBOR replacement yet identified, investors should emphasize flexibility in the rate-conversion provisions of their senior loan documents.

Background: Why is LIBOR Going Away?

LIBOR has played a critical role in the financial industry for more than 50 years. As of 2018, more than U.S. $200 trillion of financial contracts were pegged to LIBOR (Figure 1). In recent years, however, significantly reduced volumes of interbank unsecured term borrowing, coupled with revelations of rate manipulation, have undermined LIBOR’s role as a reliable reference rate. 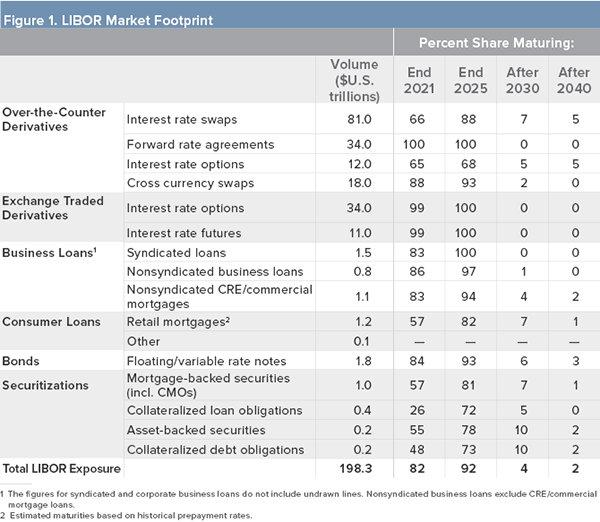 Two years ago, the United Kingdom’s Financial Conduct Authority (FCA) announced that it will no longer require banks to submit quotes for LIBOR rates after 2021. The FCA also recommended that the market stop using LIBOR as a benchmark. The FCA’s announcement does not prohibit banks from voluntarily submitting quotes, nor does it prevent the Intercontinental Exchange (ICE) — which took over administration of LIBOR in 2014 — from continuing to publish rates, but it suggests that LIBOR could phase out by the end of 2021.

On the other hand, if LIBOR continues to exist, there is a risk that it will no longer be as representative of market rates as in the past, creating confusion and uncertainty. Consequently, regulatory bodies around the world are developing new reference rates to replace LIBOR (Figure 2). The transition will be complex and time-consuming. 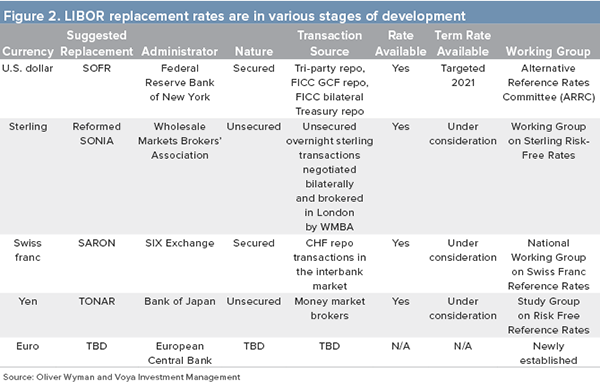 The Alternative Reference Rates Committee (ARRC) has recommended SOFR, a broad Treasury repo financing rate, as an alternative to LIBOR in the United States. Since the New York Federal Reserve began publishing SOFR, daily transaction volumes have grown from $770 billion to more than $1 trillion.3According to ARRC, the volumes underlying SOFR are far larger than the transactions in any other U.S. money market, including LIBOR. Because of its range of coverage, SOFR is considered a good representation of funding conditions in the overnight Treasury repo market, and therefore can reflect the economic costs of lending and borrowing for a wide array of market participants.4

Implications for the Senior Loan Market

Like many other income asset classes, the senior loan market relies on LIBOR for reference rates in loan documents. Loans pay a two part coupon: a fixed credit spread plus a floating, market-base rate, which historically has been LIBOR. Virtually every credit agreement in the senior loan market now includes LIBOR replacement language. In case the LIBOR screen rate is unavailable, agreements typically provide for a fallback rate, most often the U.S. prime rate.

Credit agreements also typically provide a “market disruption event” clause as a second fallback, which includes a trigger event entitling lenders to suspend making loans at interest rates calculated with reference to LIBOR. When triggered, all loans otherwise bearing interest calculated by reference to LIBOR become base-rate or prime-rate borrowings. These fallback clauses were designed for temporary disruptions, but provide relief and options that could be applicable to the discontinuation of LIBOR. Given that the prime rate generally has been about 300 basis points (bp) above the federal funds rate over the past 20 years, and assuming that this relationship persists in the future, we believe issuers will have a strong incentive to amend their credit agreements to provide for an alternate rate.

Ensuring a relatively smooth transition from LIBOR to a replacement rate will require applicability of robust fallback language that can be triggered if the following series of events occurs:

The ARRC recently released its final recommendations regarding more robust fallback language for new originations of LIBOR-based senior loans. The recommendations keep two primary approaches found in the ARRC’s draft consultations: the “amendment approach” and the “hardwired approach.” While the triggers are generally consistent, how one gets to the successor rate varies between the two approaches.

The amendment approach delivers a streamlined mechanism for negotiating a replacement to LIBOR and a replacement LIBOR spread upon the occurrence of a trigger event. Under the amendment approach, a trigger event could be 1) a public statement that LIBOR will fail to be published, or the actual failure of LIBOR to be published (a “benchmark discontinuance event”); or, 2) a determination by the loan’s administrative agent or required lenders that new or amended loans are incorporating a new rate to replace LIBOR.

It is not possible to draft credit agreement provisions that address every scenario and nuance bound to arise with the replacement of LIBOR. Nonetheless, it is important to be sufficiently proactive to minimize future uncertainty. We believe current fallback provisions need to be updated with clear guidelines for converting LIBOR to the new reference rates. For example, the new reference rates likely will be lower than LIBOR since they do not account for credit risk. Current fallback provisions do not provide much clarity on handling spread differences between LIBOR and a replacement rate.

The transition could become even trickier if the market adopts a new rate as its target index while LIBOR continues to exist. In such a situation, could lenders switch to a new rate if LIBOR was still being reported, even if it was no longer a viable rate? In the absence of a clear process in underlying credit agreements, disputes over converting LIBOR to a comparable rate would likely become unavoidable, potentially leading to serious disruptions of payments to lenders and investors. Voya is reviewing existing credit agreements, seeking to strengthen conversion provisions where possible. We recommend that other lenders and investors do the same.

Early studies suggest that shifting from LIBOR to SOFR will not be a simple conversion drill. LIBOR and SOFR rates can vary greatly depending on market situations, particularly given the unsecured vs. secured nature of each rate, respectively. This creates additional challenges for the transition process because there could be a meaningful disparity between the two numbers when a fallback triggers. This could have significant impact to the coupons paid by borrowers, and therefore potentially affect investor returns.

As a result, it will be necessary for loans that fall back to SOFR (or any other rate) to require a spread adjustment to make the successor rate more comparable to LIBOR. It is also important to remember that LIBOR may continue to exist beyond 2021. With lower transaction volume and no regulatory oversight, LIBOR may not behave as it has in the past. In a nonregulated environment, market participants can expect more volatility and greater risk of manipulation. Though there is no simple solution to these problems, ARRC has said that it will work on a spread adjustment to compensate for the lack of credit risk embedded into SOFR.

LIBOR rates are traded with tenors of one, three, six, and twelve months, whereas SOFR is a daily overnight spot rate. Currently, given the nature of LIBOR’s forward term curve, market participants and counterparties know their rates and future interest rate expectations in advance. SOFR does not currently provide that forward term curve, which imposes a significant burden on back-office operations and cash flow management for loan managers and other market participants and counterparties.

While the Federal Reserve has already published an indicative SOFR term curve and will work toward developing a forward-looking term SOFR benchmark, there is no guarantee that it can be developed given that an appropriate term benchmark would be dependent on there being a robust SOFR futures trading market. As a result, there are several SOFR variants currently in development by the ARRC and under review by market participants.

Although the intricacies and pros and cons of each of those variants is outside the scope of this piece, the important take-away is that managers and market participants must begin to understand the impact of each and be ready to quickly take action to implement the necessary process changes associated with each variant as the path forward becomes clearer. LIBOR has existed for decades without major changes, implying that many of the financial systems supporting LIBOR products are as old as LIBOR itself.

Without major overhauls, these operational infrastructures are not likely to be compatible with products using the new reference rates. System updates generally entail complex issues, and take a long time to implement. Given the extent of the overhaul that may be required to replace LIBOR, we suggest market participants begin reviewing their system capabilities and identifying areas of concern.

This commentary has been prepared by Voya Investment Management for informational purposes. Nothing contained herein should be construed as (i) an offer to sell or solicitation of an offer to buy any security or (ii) a recommendation as to the advisability of investing in, purchasing or selling any security. Any opinions expressed herein reflect our judgment and are subject to change. Certain of the statements contained herein are statements of future expectations and other forward-looking statements that are based on management’s current views and assumptions and involve known and unknown risks and uncertainties that could cause actual results, performance or events to differ materially from those expressed or implied in such statements. Actual results, performance or events may differ materially from those in such statements due to, without limitation, (1) general economic conditions, (2) performance of financial markets, (3) interest rate levels, (4) increasing levels of loan defaults, (5) changes in laws and regulations, and (6) changes in the policies of governments and/or regulatory authorities. Past performance is no guarantee of future results.