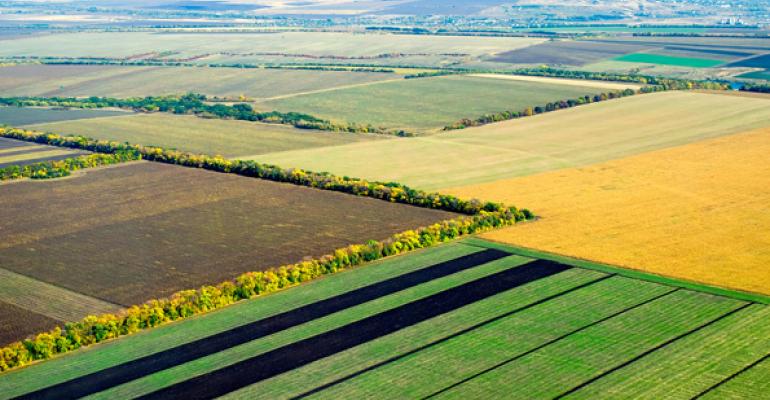 Clients with farmland income may have to adjust expectations as rents and valuations have reached a top, some observers say.

The dynamics that have supported record-high farmland prices and rents are changing, and that may mean clients holding farmland for income may want to consider selling.

A primary growth engine for agriculture, biofuels, is beginning to stall out as domestic use for ethanol may have peaked, some observers say. Investor interest in alternative and hard assets has become fallow in the face of strong equity markets. Crop harvests are plentiful. All of these factors make the run up in farmland prices look overripe.

But that doesn’t mean a repeat of the 1980s farm crisis is coming. Farmers are generally better capitalized now, agricultural experts said, and while interest rates are likely to rise, they’re not likely to revisit their 1980s highs, either.

Here’s what could happen: as farmland valuations top out, the rents landlords collect from leasing the ground to farmers will eventually fall as crop prices retreat. Land owners who regard the lease payments as a form of income may have to readjust their expectations if current subdued crop values persist for several years.

Farmland has been a great investment. National farmland values rose to $4,000 in 2013, from just over $1,500 an acre in 2004, with prime Midwestern farms valued at nearly double that, on average, Agriculture Department data show. The National Council of Real Estate Investment Fiduciaries’ Farmland Index shows values are up 10.35% through the third quarter.

But a slowdown is coming. The Chicago Federal Reserve’s Agricultural Newsletter said third quarter prices are up 14% year-over-year, but only 1% over the second quarter. Bankers surveyed expect fourth quarter values to be stable to weaker. Creighton University’s Rural Mainstream Index November banker survey showed nearly half forecast lower farmland prices over the next 12 months.

Southeast Asian economic growth will mean higher food demand long-term, but the big biofuel demand driver is stabilizing at best, Gloy said, as domestic use has likely reached its limits. A big grain harvest this year quickly replenished recent supply shortfalls. Given advances in agricultural technology – everything from seed genetics to machinery - bountiful U.S. harvests are generally more common than not.

“The question (is), will demand growth continue to outpace supply growth? Right now it looks like not. So that means we have to get back into equilibrium and probably at a little lower price for commodities,” he said, adding that lower commodity prices mean less revenue produced by the same acre of farmland.

Last year, benchmark Chicago Board of Trade corn futures prices traded around $7.45 a bushel, lifted partially by 2012’s drought. At the beginning of December 2013, corn’s price was $4.24. Corn is the largest and most valuable crop grown in the U.S. and its price can guide farm income.

Given current supply and demand projections, where might corn prices go longer-term? Gloy said $4 a bushel is “probable.” That makes record farmland prices, some which sold as high as $15,000 an acre, “very hard to justify,” he added.

Karl Setzer, market analyst at MaxYield Cooperative in Iowa, said if $4 corn prices stay, the high cash rents farmers currently pay landlords aren’t sustainable. Cash rents are a fixed amount per acre farmers pay landlords to produce crops. Some of the highest cash rents in the Midwest go for $400 to $500 an acre.

Those rents are usually on top of the loans farmers take out to pay for inputs like fertilizer, seeds and diesel for machinery. Setzer said if interest rates rise and crop prices fall, farmers will be in a tight squeeze.

Farmers won’t be able to “offer the high rents, so landlords will have to rethink their position,” Setzer said. He noted that in Iowa at $430 an acre cash rent, a farmer would need to harvest an average-sized crop of 160 bushels an acre of corn on a 640-acre section of land and receive $5.50 a bushel to just break even.

Landlords may need to rethink their income expectations and land prices may no longer set records, but don’t hang up a “for sale” sign just yet. Farmland is still a worthwhile long-term investment, agriculture experts said. Just don’t bank on the recent run of double-digit price gains anymore.

“I think it’s a great asset class, one that provides a nice stable return over a long period of time, but it’s not going to give you a consistent 20% return... You want to recalibrate the returns to the 6% to 7% appreciation and income region, I think,” Gloy said.

It can be a challenge to own farmland because price information isn’t readily available and it can be an illiquid market, said Jose Minaya, managing director and head of natural resources and infrastructure investments for asset-management company TIAA-CREF, which has a $4.4 billion global farmland portfolio.

But he says it’s a great diversifier because it’s not correlated to other markets. However, he adds: “I can’t say enough that farmland is a long-term holding.”

Minaya also points out that unlike gold, a favorite hedge for those fearing inflation, farmland is one of the few hard assets that produce a yield because of crop production.

For investors who bought farmland in the recent rush into hard assets for safety and are concerned about the potential for weakening prices, Minaya again stresses the long-term view.

“If you own farmland, these are long-term asset fixtures in your portfolio. (They are there) to the point that you need them for your retirement or your estate planning,” he said.