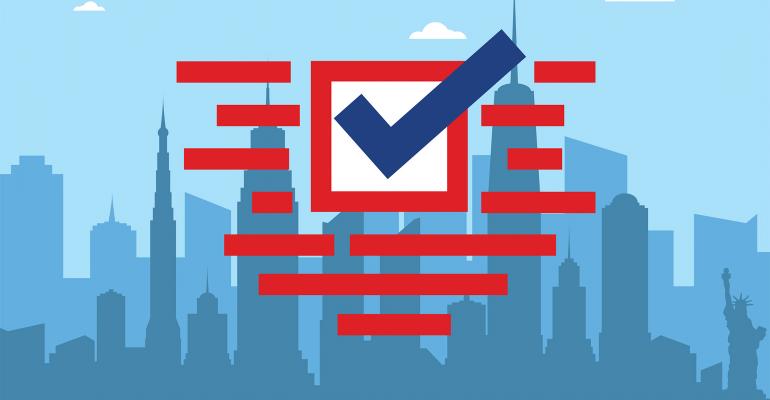 A Guide to the 2020 Election for CRE Pros

In addition to the outcome of the Presidential election and control of Congress, a number of ballot measures are significant for the CRE industry.

Taking place amid the worst global pandemic in a century, a battered economy and intense political polarization, this year’s U.S. elections are poised to have a lasting effect on the nation’s path for years to come.

Voters have taken notice. According to the United States Elections Project, more than 94 million votes have already been banked, by far the most ever. Some states, including Hawaii and Texas, already have more votes banked in this election than they did for all of 2016. Of those, analytics firm TargetSmart estimates 28.5 percent did not vote in 2016. That’s leading experts to predict total turnout might eclipse 155 million with potentially up to 70 percent of registered voters casting ballots, the highest level in more than a century.

And while poll-based election models are pointing towards a potential Democratic sweep of the White House, the Senate and the House, 2016 showed us that the most likely scenarios don’t always come to fruition.

Moreover, with high levels of voter participation and with some states accepting ballots several days beyond November 3, it will take time to count every vote. In the event of a close election in certain states—for example, Pennsylvania—we may not know the election outcome for days (or weeks). There are worrying signs that such a scenario might lead to mass protests and potentially violence. There are scattered reports of property owners across the country planning for the worst and readying to board up windows and lock down, if necessary, depending on the what transpires on the streets.

Aside from those worrying potentialities, the final outcomes of the election carry varying implications for what to expect once January rolls around and a new President and Congress have taken office. There are at least four scenarios to weigh in terms of a mix of power between the White House, the Senate and Congress. The most radical outcomes would be a clean sweep of power for either party, opening the door for bolder legislative agendas. On the flip side, scenarios where power is divided between the White House and Congress are a near guarantee to produce two years of gridlock until the midterm elections or longer.

A Trump win with Republican control of the Senate would represent the status quo and four more years of the sorts of policies we’ve seen. It would keep the Trump tax cuts in place, continue an emphasis on reducing regulation on businesses and further conflicts on trade. There’s long been talk of a potential infrastructure plan, but the details on that have remained scarce for years.

Meanwhile, a Biden win—with full Democratic control of Congress—raises the prospects of a shifting tax landscape. In addition to pledging to roll back the Trump tax cuts and pursue policies to increase taxes on Americans with incomes of greater than $400,000, during the campaign Biden unveiled a 10-year, $775 billion plan to fund universal childcare and in-home elder care that would be paid for by taxing real estate investors. If enacted, it would do so by taking aim at like-kind exchanges, which allow investors to defer paying taxes on the sale of real estate if the capital gains are reinvested in another property.

That said, a recent Cushman & Wakefield report found that "property has performed well under both parties. Since 1979, NCREIF property index returns have averaged better than 8.5% annually under various Democratic and Republican administrations."

But there is a lot more at stake on Tuesday than whatever happens at the national level. There are a number of state ballot measures the real estate industry should be watching.

In California alone, there are three ballot measures—Prop 15, Prop 19 and Prop 21—that could affect commercial real estate.

Prop 15 has received the most attention. Currently, all properties in California and taxed are calculated based on their previous purchase price. The ballot measure would change to institute a so-called “split-roll” system so commercial property would instead be assessed annually and taxes calculated based on the building’s current market rate. Unsurprisingly, commercial real estate trade groups are investing heavily to try and defeat the measure.

The Real Deal completed an in-depth look at all three proposals.

There’s also a ballot measure in Nebraska, Amendment 2, that would “increase the repayment period for tax increment financing from 15 to 20 years for areas where more than one-half of properties are designated as extremely blighted.”

Lastly, in Utah, Amendment G would allow the Utah State Legislature “to use revenue from income taxes and intangible property taxes to support children and individuals with a disability.”

And then several states have ballot measures that would legalize recreational or medical marijuana, which would be a boon for the ever-growing arena of marijuana real estate.

Ballot measures include Prop 207 in Arizona, Ballot Measure 1 in Mississippi, CI-118 and I-190 in Montana, Public Question 1 in New Jersey and Constitutional Amendment A and Initiated Measure 26 in South Dakota. According to Fivethirtyeight.com, polls suggest all of these measures are on pace to pass.

A full list of all ballot measures is available at Ballotpedia.