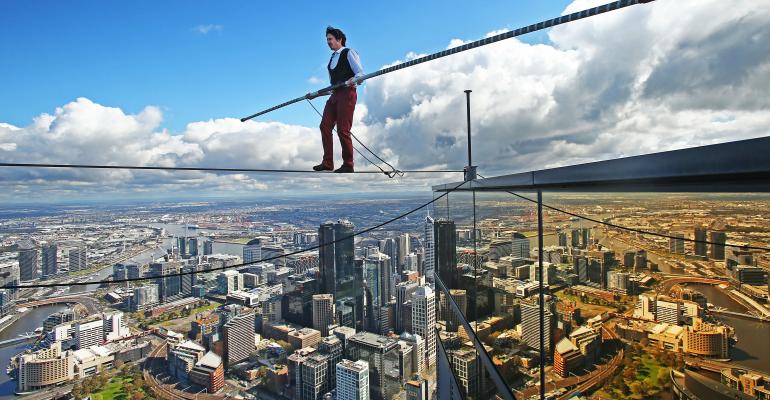 The Art of Rebalancing

Successfully rebalancing a portfolio means walking a fine line between controlling for risk and incurring trading costs. Sometimes, it pays to leave the portfolio alone.

For advisors who want their portfolios to maintain stable risk-return profiles when the weight of assets stray from their chosen allocations, rebalancing is key. But it’s not so simple—how often should a manager rebalance? How far out of whack do allocations have to get before rebalancing makes sense?

Vanguard produced a study on the issue last year and found that “for most broadly diversified stock and bond portfolios, annual or semi-annual monitoring, with rebalancing at 5 percent thresholds, produced a reasonable balance between risk control and cost minimization,” the report states. Thresholds are the amount your portfolio’s actual weightings must move before you will rebalance.

So the big question for advisors is how often does rebalancing make sense?

Vanguard compared rebalancing results for different monitoring frequencies and threshold levels in a portfolio split evenly between global stocks and bonds from 1926 through 2014. With annual monitoring and a 5 percent threshold, the portfolio’s volatility was 9.8 percent annualized, the lowest for any strategy. The portfolio’s average annualized return of 8.2 percent, however, did not vary much.

A portfolio that wasn’t rebalanced at all registered an annualized return of 8.9 percent, much higher than the strategies that did involve rebalancing. That’s because the un-rebalanced portfolio drifted to an 81 percent weighting in stocks, which have outperformed bonds historically. But that portfolio had far and away the highest volatility—13.2 percent.

In terms of cost, the portfolio with annual monitoring and a 5 percent threshold had a 1.6 percent annual turnover rate and 36 rebalancing actions, among the lowest readings for all rebalancing options. Of course, refraining from rebalancing means zero rebalancing costs, but that cost savings comes with much higher volatility for your portfolio.

If you wanted to maximize returns between stocks and bonds, you could simply keep all your assets in stocks, given their historical return advantage over bonds. But then your portfolio would be at risk to a drop in the equity market.

There is an emotional challenge to rebalancing, says Colleen Jaconetti, senior investment strategist at Vanguard and a co-author of its report. “Rebalancing usually happens after the market has done very well or very poorly,” she explains. And at that moment, investors are tempted to stand pat or buy if the market is rising and to sell if it’s falling—exactly the opposite of rebalancing theory. “So it’s helpful to have a rebalancing plan in place before the point of decision-making,” Jaconetti says.

Still, “Rebalancing isn’t always beneficial,” says Richard Yasenchak, client portfolio manager at money manager INTECH, a subsidiary of Janus Capital Group. INTECH’s investment strategy is based on rebalancing. If you use rebalancing to maintain a constant weighting of small-cap stocks in an equity portfolio, that would be a good thing, he says. You’d sell your winners as they grew too big to be classified as small-cap and replace them with smaller stocks poised for gains.

But rebalancing to maintain a large-cap weighting doesn’t make sense, he says. You’d sell stocks that fell in value, because they were no longer large-cap stocks, and you’d buy stocks that gained in value, making them large-cap. “You’re selling low and buying high,” Yasenchak says. “That’s a bad rebalancing.”

The basic rule of thumb is that the more diversification you seek for your portfolio, the more helpful rebalancing will be, because it restores diversification to your desired levels, he says. And your desired allocation weightings don’t have to remain static, Yasenchak notes. They can change over time. You just have to make sure your trading costs don’t exceed your excess return. Jaconetti says you may want to review your weightings once a year.

Not everyone believes in the need to formally rebalance a portfolio. Jeff Greene, a Palm Beach, Fla. real estate investor (and a successful one: He’s number 194 on the Forbes 400 list), adjusts his $3.5 billion portfolio on an ad hoc basis. “I’m always watching things, but I don’t do it on a regular schedule.” With the stock market near record highs, he has shifted some money from stocks to cash. “I wouldn’t do that when the market was 30 percent lower.”

Diversification is important to Greene. “Leverage and concentrated positions are the biggest reasons people get in trouble,” he says. But he’s not concerned with formal asset allocation weightings. “Even if I’m heavy in real estate, if someone comes to me with a spectacular deal, I will do it,” Greene says. And he views stocks the same way. “I look at things deal by deal.”

The most concentrated his portfolio became was about 90 percent real estate in 2006. But then two years later he created a huge short exposure to subprime mortgage securities. Now his weightings are 35 percent for real estate, 30 percent stocks, 18 percent fixed income, 10 percent cash and 7 percent alternatives.

Chris Litchfield, a retired hedge fund manager and now an active investor in Greenwich, Conn., also embraces diversification while rejecting formalized rebalancing. And he’s happy to contradict the basic philosophy behind rebalancing at times. “I will buy into an upturn,” he says. “My style is to avoid losers and add on to winners.”