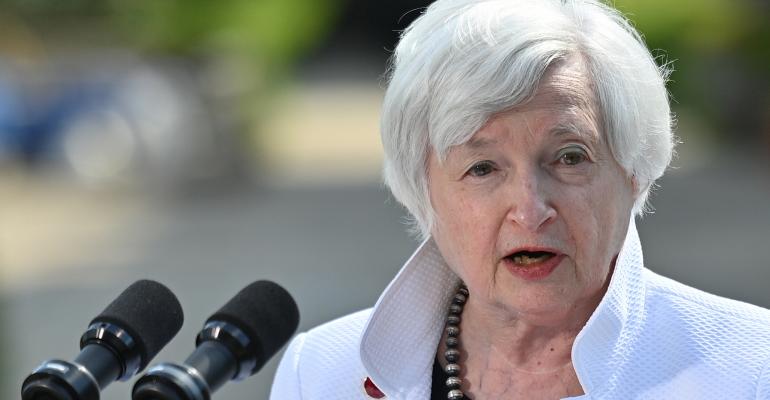 Yellen Passes Deal-Making Test on Taxes, With Long Road Ahead

Talks will continue next month, when Italy hosts Yellen and colleagues for a Group of 20 meeting.

(Bloomberg) -- Janet Yellen proved her bona fides as a political deal-maker by leading the world’s richest economies to an agreement on global taxes that had eluded negotiators for nearly a decade.

Yet what was hailed as a victory at the Group of Seven for President Joe Biden’s Treasury secretary may not carry far in Washington, where winning lawmakers’ support for the administration’s vast plans for tax and spending increases will be a far tougher challenge.

The G-7 finance ministers on Saturday sealed a landmark deal in London, paving the way to help countries collect more taxes from big companies and setting a minimum global corporate tax rate of at least 15%. That would signal an end to decades of nations racing each other to lower levies, eroding their collective revenues.

Yellen’s role was “crucial” and “decisive,” European Union economy chief Paolo Gentiloni said at a press conference at the conclusion of the G-7 meeting. He said that “six months ago, we were in the middle of nowhere.”

A final, global deal is a still a long way off, however. Talks will continue next month, when Italy hosts Yellen and colleagues for a Group of 20 meeting. Any accord must also have support from a majority of about 140 nations involved in negotiations under the Organization for Economic Cooperation and Development.

Then, Yellen needs to pitch it to Congress -- and Republicans are already signaling that they will be difficult to persuade.

The G-7 deal could “adversely” impact and “ultimately harm” American workers and businesses, Senator Mike Crapo and Representative Kevin Brady said in a statement released Saturday. They are the senior Republicans on the congressional tax-writing committees.

Still, the accord shows that Yellen is making the transition from monetary policy chief to international financial diplomat. The 74-year-old former Federal Reserve chair provided a jolt to global tax talks that had plodded on since 2013.

“We reinvigorated these tax negotiations by really listening to the concern that they had about digital taxes,” Yellen said, referring to G-7 counterparts who had been pushing levies on mainly American technology giants.

The second key was “trying to craft a creative” strategy and new alternatives “that could get us beyond an impasse and find something that is fair on all sides,” she said Sunday in an interview during her flight back from London.

At little more than five feet tall, Yellen’s personal demeanor is self-effacing. She disregards the pomp that comes with being a cabinet secretary; many of her new aides at Treasury refer to her simply as “Janet.”

On the way to and from the G-7 she was seen towing her own bright red suitcase.

Her more than two decades of experience at the Fed have given Yellen the kind of intellectual heft that’s valued on both sides of the political aisle. Still, the Brooklyn native came to her new job as Biden’s top economic policy maker with little practice generating consensus in the public eye.

Finance ministers around the world have known her as a central banker, not as a deal-maker on a global stage such as seen the past few days, a G-7 official noted, speaking on the condition of anonymity.

Decisive contribution by @SecYellen to the unprecedented @G7 agreement on global taxation pic.twitter.com/SCa0qK2DwN

As vice chair and then chair of the Fed from 2010 to early 2018, Yellen engaged with foreign counterparts and titans of the banking industry during the prolonged recovery of the world’s largest economy from its brush with financial collapse and depression.

That was all conducted with less of the political interest and oversight that’s attached to fiscal policy. Though her job has changed, Yellen still doesn’t see herself as a politician.

“It’s not that different than what I was doing” at the Fed, Yellen said of her work as Treasury chief at the G-7. While monetary decisions were deliberated in private, board members and heads of the 12 Fed district banks would speak publicly about their views on the economy and on policy decisions, Yellen noted.

Still, such interlocutors are part of a single institution, whereas as Treasury chief, she contended in London with the likes of French Finance Minister Bruno Le Maire, whose political career spans more than 15 years, and Japan’s Taro Aso -- a onetime prime minister.

Before arriving in London, Le Maire ratcheted up pressure on the U.S., saying it was “essential” to get a deal by Friday on taxing digital giants such as Amazon.com Inc. -- something a raft of American lawmakers have opposed.

Yellen indicated that she approached the task first as a student, learning the issues from experts such as Itai Grinberg whom she had hired at the Treasury Department.

Yellen relied on Grinberg, previously a law professor at Georgetown University focusing on international tax and trade laws, to work with counterparts to find fresh solutions to the years-long international tax impasse.

Grinberg, 45, previously worked as an outside adviser for the OECD, and now serves as deputy assistant secretary for global tax policy at Treasury.

Yellen met with her G-7 counterparts as a group and then bilaterally during the gathering. She started some meetings openly recognizing that while she has a strong background in monetary policy, global tax policy was new to her -- but that she has spent time deepening her knowledge, one official said.

“What you have to do is try to craft a way forward that takes into account the interests and perspectives of different partners to make them feel that, yes, they may be compromising on something -- but their core interests and concerns are being understood and addressed,” Yellen said.

--With assistance from Alberto Nardelli.