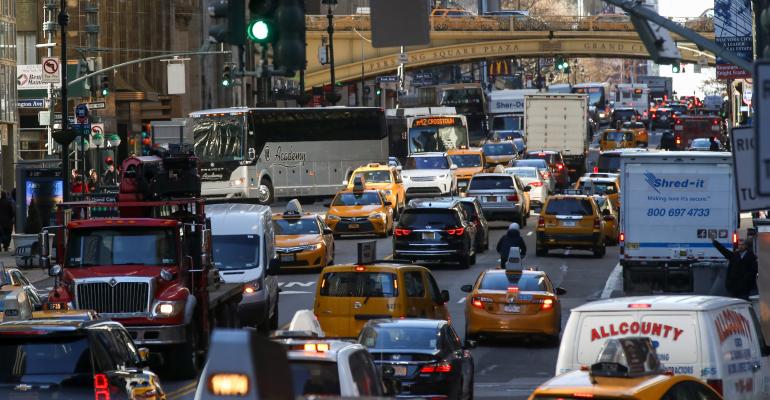 Congestion pricing has had an impact on property values in other cities. But New York may be different.

Faced with the prospect of congestion pricing for vehicles in the city’s busiest neighborhoods, New York’s commercial real estate industry is wondering how the measure will affect property values. In Singapore, a similar congestion fee to reduce vehicular traffic led to a 19 percent drop in prices on retail real estate within the affected zone, according to a 2015 study by The Journal of Urban Economics. So far, real estate industry insiders say that type of impact is unlikely to happen in Manhattan.

“We had a conversation with one of our LPs recently about that, about trying to understand how dependent they are on vehicular versus pedestrian traffic because of congestion pricing,” says Jeff Berman, general partner at Camber Creek, a venture capital firm focused on investing in real estate technology companies. “Remember, specifically through New York, a lot of the vehicular traffic is trying to bisect the city, so it’s not comprised of people that are shopping, buying or living here anyway. So, again, this is still a big question mark.”

Most shoppers in New York City comprise a mix of tourists, office workers and local residents, according to Tom Citron, executive managing director with Colliers International, a commercial real estate firm. Since these demographics largely use public transit or walk down the street, the number of vehicles going into the city to shop are minimal, and therefore, less vehicular traffic due to congestion pricing should not contribute much to existing retail traffic patterns, Citron notes.

“I really don’t think it will have a large effect. The general population here in New York is going to do the majority of retail shopping,” he says. “This is a walking city, everyone relies on public transportation. I don’t see congestion pricing really affecting pricing [of] real estate, or commercial real estate, or retail real estate for that matter.”

In London, another city that instituted congestion pricing, the measure resulted in home values within the affected zone increasing by more than 3.0 percent, or $13 billion in total, according to a 2018 paper by Cheng Keat Tang. Meanwhile, office building values in the city weren’t impacted, says Berman.

However, parking garages just outside the impacted zone should begin charging substantial premiums compared to garages inside the zone, according to Forbes. About a quarter of office buildings in New York City contain parking garages. But that revenue is typically a very small contributor to an office building’s total revenue, particularly for some of the larger buildings, according to a Kroll Bond Rating Agency report.

Overall, the effects of congestion pricing on commercial real estate should be felt immediately after the new fares go into effect, says Berman, as businesses will have to adapt to changes in vehicular and pedestrian traffic patterns. New York City’s congestion pricing is slated to take effect in 2021.