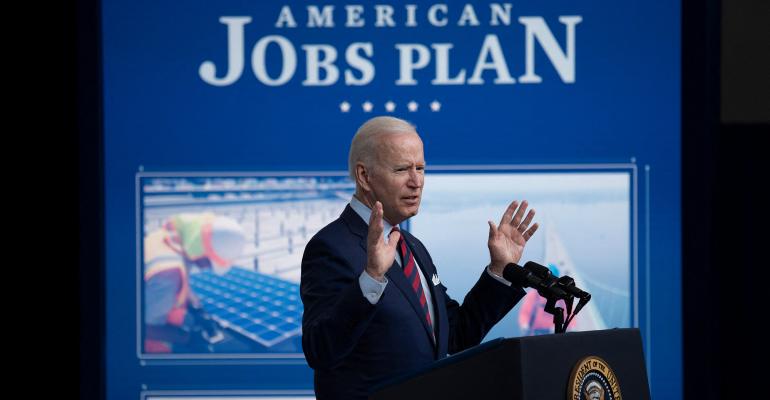 What CRE Opportunities Await if the American Jobs Plan is Enacted?

From funding for affordable housing to the focus on energy efficiency, the plan could benefit commercial real estate investors in various ways.

“The expectation of the American Jobs Plan Act of 2021 is the development of long-term construction projects that stimulate the economy and provide an improved, safer and cleaner environment,” says Mike Bammel, managing director with the valuation advisory group and the national practice lead for renewable energy with real estate services firm JLL.

In addition to mitigating the effects of climate change, Bammel notes that with the plan’s proposed funding to boost manufacturing, affordable housing development and public transportation projects, commercial real estate investors are expected to seek properties for new development, rehabilitation or repositioning for new uses.

In addition, a “Made in America” push is likely to result in increased manufacturing domestically, adds Aaron Jodka, research director, U.S. capital markets, with real estate services firm Colliers International, noting that this is likely to primarily benefit existing manufacturing centers. However, “the transportation network to move goods produced will be beneficiaries, but more domestic production will drive increased demand for commercial real estate across the board—industrial, office and multifamily,” Jodka says.

If passed, the plan could create the most direct opportunity for real estate investors in funding for renovation or development of 500,000 affordable and workforce housing units, according to Joe Biasi, a consultant at real estate data firm the CoStar Group. But he also stresses that the plan’s indirect impact will have a more far-reaching impact on the commercial real estate market overall, boosting capital investment and returns. For example, the improvement and expansion of mass transit infrastructure would likely stimulate new development and result in higher occupancy and rent growth for market-rate multifamily and commercial properties. Biasi cites the fact that there tends to be a 30 percent rent premium for multifamily projects that are located within three-fourth of a mile from a rail station.

Historically, light rail created opportunities for new multifamily development in cities including Denver, Dallas and Phoenix, adds Jodka. And in recent years, projects in cities with higher barriers to entry, such as New York and Boston, have benefited from subway/rail line expansion.

Office buildings located near light-rail stations enjoy a rent premium too. A study by real estate services firm Cushman & Wakefield on the impact of office buildings’ proximity to the Metropolitan Atlanta Rapid Transit Authority (MARTA), for example, documented rent premiums of up to 14.5 percent per sq. ft. for office space within one-fourth of a mile from a MARTA train station, reported the Atlanta Business Chronicle.

He notes, for example, that new construction technology, such as modular housing, could increase the supply of low-income and middle-income housing stock, but is not allowed in most cities.

The industrial sector would benefit immensely from improvements to roads, bridges, railways, airports and ports, according to Biasi. The infrastructure proposal provides funding for dredging ports to expand their capabilities, which is especially important to ports that are likely to experience slowdowns in logistical activity due to bottlenecks, like the Port of Los Angeles.

Additionally, new climate-focused funds could take advantage of public-private funding opportunities afforded by the plan’s focus on environmental projects, including a $200 million investment vehicle being put together by Greensoil Proptech Ventures and Fifth Wall Ventures that will focus on energy efficiency and climate tech solutions.

“This is still new, so it is early (for private equity funds),” says Jodka. “But there will be opportunities for investors across the spectrum. It may not be as clear as ‘buy 123 Elm Street,’ but knowledge-based economies, secondary cities, manufacturing hubs, and rural areas will all benefit to some degree.” Jodka notes that in recent years there has been a reported increase in infrastructure funds available to individual investors, and this trend is expected to grow.

In addition, Biasi says that if the plan ends up stimulating multifamily and commercial development in urban transit corridors, it will create investment opportunities for REITs, institutional investors and large corporate real estate funds, all of which have the financial resources to fund large real estate projects.

Jodka points out that improving energy efficiency and capacity is also a major part of the proposed plan, with funding earmarked for retrofitting buildings and renovating housing. “This would allow a variety of local and regional players to get in on rehab work on schools, government buildings, homes, and … commercial real estate assets. If it passes, it would not be surprising to see some landlords find ways to benefit from this spending package to update, upgrade, or reposition their assets,” he says.

Some in corporate America are critical of Biden’s proposed plan because it would be paid for raising the corporate tax rate from 21 percent to 28 percent. Nevertheless, corporations would still pay less under this proposal than they paid prior to the Trump Administration’s 2017 tax cuts and the benefits of infrastructure improvements to corporate interests would more than justify the higher taxes, Biasi says.  He notes that many of the companies that would benefit the most from infrastructure improvements already pay little or no corporate income tax. But they would not be able to avoid the proposed 21 percent minimum tax on U.S. companies’ foreign income.

According to a study by Institute of Taxation and Economic Policy, the 2017 tax reform also expanded corporate loopholes and tax incentives. As a result, 60 of the nation’s largest corporations paid no income tax in 2018, including Amazon, Chevron, Delta Airlines, Eli Lilly, General Motors and IBM, among others. Another 56 companies paid on average 2.2 percent in taxes, and 379 other profitable companies paid an effective federal income tax rate of 11.3 percent.

So while from a commercial real estate standpoint, “there is a lot to like about this [infrastructure improvement] plan,” Jodka says. But he suggests that due to politics, it’s unlikely to pass quickly like the most recent stimulus bill.

Meanwhile, Biasi notes that corporate tax increases have historically resulted in an immediate drop in capital investment, but according to the Tax Policy Center, this reduction in investment is generally short-term, especially when accompanied by government stimulus spending.

“As corporate tax rates increase, investors may look for ways to take advantage of the federal business investment tax credit for renewable energy,” says JLL’s Bammell. For example, renewable energy from solar photovoltaic technology is relatively easy to implement as a program, whether it’s just on one site or for a whole portfolio, and provides added conveniences for tenants if installed on carports, such as shelter from the weather elements and lighting. Bammel adds that the proposal’s funding for expanding electric vehicle charging capability and solar and energy storage systems would be attractive sustainability incentives for commercial real investors.

The biggest downside to Biden’s infrastructure proposal, according to Biasi, is that it’s likely to put upward pressure on the cost of construction materials and labor, because it will create competition between public and private construction interests. This will be especially acute for the limited amount of skilled labor available, Biasi says. He notes that that current construction industry employment number at 7.5 million is already nearing the pre-pandemic peak of 7.6 million workers employed.