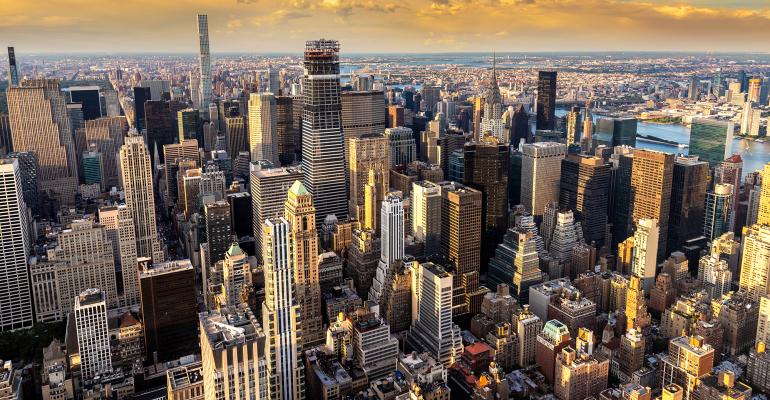 Russian Billions Hidden in US Spur Backlash to Financial Secrecy

A movement is forming to peel back the curtain on LLC structures that are favored for shielding property ownership.

(Bloomberg)—The US is by at least one measure the biggest enabler of financial secrecy in the world.

Now a movement is forming -- backed by Republicans and Democrats -- to peel back the curtain on one favored structure for shielding ownership.

Officials from New York to Alaska are seeking a glimpse into anonymous limited liability companies doing business in their states -- in some cases, because Russian billionaires were found to be hiding behind the corporate structure. The moves would build upon a law passed at the federal level before the war in Ukraine that required LLCs to disclose their owners to the Treasury Department.

The efforts are still very much in their early stages and would be a major change to a structure that dates back to 1977, when Wyoming was the first state to create an LLC.

For now, New York is leading the charge, with proponents galvanized over the fact that property in Manhattan linked to now-sanctioned Russian billionaire Oleg Deripaska was held using a Delaware LLC.

“People are shocked to learn about this loophole in the law that allows purchasers to go undetected,” said New York state Senator Brad Hoylman, a Democrat who sponsored a bill heading to the floor of the legislature. “Certainly, the focus on the international super-rich who have propped up the Putin regime has rekindled interest in the effort.”

New York’s proposal, which could be voted on as soon as this month, would be among the most aggressive attempts yet to undo financial secrecy in the US, which was called the most complicit country in helping individuals hide wealth this week by the Tax Justice Network, an advocacy group for tax fairness.

It earned the worst rating since the group began its rankings in 2009.

It would become the first state to follow with its own disclosure reforms, opening the way for freedom of information requests by the public under state law. That could affect the 1.6 million LLCs that do business within its borders.

The bill stops short of creating an online public registry that could help make sure other companies, partnerships or trusts aren’t used to hide identities. Transparency advocates are preparing a separate proposal for that.

Andres Knobel, TJN’s lead researcher on beneficial ownership, said the US is “in urgent need to catch up,” given other countries have had such a system for years.

Sanctions on Russian President Vladimir Putin and his wealthy allies after the country’s invasion of Ukraine have raised concerns from London to New York about how anonymous shell companies complicate enforcement. New York Democratic Rep. Carolyn Maloney, who sponsored the Corporate Transparency Act, said the state bill would “expose the murky world of New York’s LLCs” that let oligarchs and other bad actors stash assets.

In addition to Deripaska, Russian billionaires from Roman Abramovich to Dmitry Rybolovlev have held New York real estate through LLCs, city property records and court documents show. Neither are sanctioned in the US.

“The US is, in fact, the easiest place in the world to open up an anonymous company,” said Gary Kalman, US executive director of Transparency International, in a legislative briefing on the New York bill on May 3. “We want to be a business-friendly country. However, that doesn’t mean they deserve secrecy that can affect our communities.”

Other efforts include Alaska’s proposal for a public database of LLC ownership and a debate in Wyoming over reforming the trust industry after the Pandora Papers exposed Russian billionaire Igor Makarov’s use of a so-called cowboy cocktail, a trust layered beneath shell companies. Makarov has been sanctioned by Canada, but not the US.

“We don’t even know the extent to which foreign actors exploit trust laws,” Alaskan lawmaker Zack Fields, a Democrat, said in a telephone interview. “It’s hard to assess given their high degree of opacity.”

The Alaska bill would give regulators insight into individuals and families who hide assets in the state’s trusts. It could reach a vote in a session next year, Fields said.

As for Wyoming, home to a $31.5 billion trust industry, significant changes to tax policy remain a “long shot,” said state Senator Cale Case, a Republican pushing for his committee to discuss the issue of financial secrecy in hopes of expanding disclosures.

Still, the movement in New York is potentially the most significant, said Ryan Gurule of the Washington-based Financial Accountability and Corporate Transparency Coalition. He attended recent legislative briefings on disclosure reforms in the state, as well as Wyoming and Alaska.

“New York is one of the most desirable commercial and real estate markets in the world, and kleptocrats, sanction evaders and otherwise bad actors want to access those markets anonymously,” he said. “New York is basically saying: ‘enough.’”

Hoylman proposed reforms in 2017, after investigations of Trump Tower revealed many buyers used LLCs -- but it never made it to the floor. The current bill, designed with Assembly member Emily Gallagher, expands the definition of beneficial ownership to be reported to the New York Department of State to account for multiple layers of shell companies, though amendments made in the committee rolled back plans for a public registry involving the state’s tax department.

“It’s hard to believe that nobody knows who owns vast tracts of real estate in parts of my district like Billionaires Row,” Hoylman said.

--With assistance from Damian Shepherd.