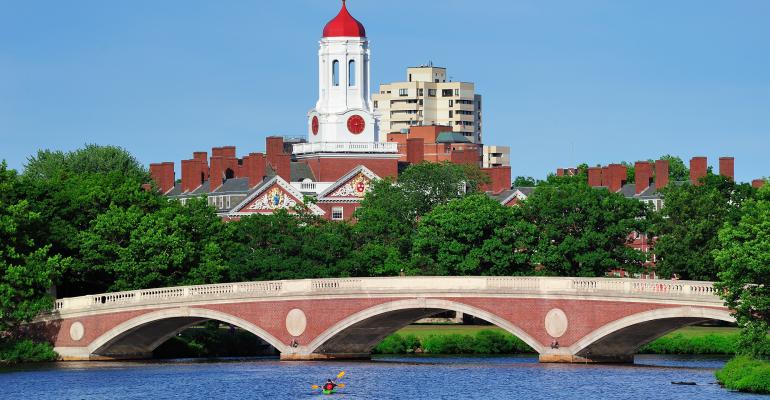 Investment Management Corp. of Ontario is investing hundreds of millions in a new Harvard research campus.

(Bloomberg)—Ontario’s public fund manager is investing in a new research campus at Harvard University, part of a wider effort to diversify its real estate holdings and gain more exposure to the U.S. market.

Investment Management Corp. of Ontario is putting $100 million directly into the mixed-use project, which will have conference, lab, hotel and residential space. It’s also committing $325 million to the Breakthrough Life Science Property Fund, which is making its own investment in the proposed 14-acre site.

“There’s a number of factors driving growth in demand for lab space -- obviously broad phenomena like life expectancy and the amount of funding that’s going into biotech, and also a shift from companies owning all of their lab space to leasing it,” Clark said in an interview. “This segment has been growing quicker, and tenants have tended to turn over less. That’s the kind of thing that generates very healthy long-term returns.”

IMCO has agreed to co-invest a total of $250 million in specific investments and projects alongside the Breakthrough fund, which was created by Breakthrough Properties LLC, a life-science real estate investment company jointly formed by Tishman Speyer and Bellco Capital. The $100 million for the Harvard campus is part of that.

The site is directly adjacent to the Harvard Business School and a new science and engineering complex, as well as the Pagliuca Harvard Life Lab.

IMCO, a pension manager for government workers in the Canadian province, is in the midst of revamping its real estate portfolio, cutting its exposure to retail property, after suffering a 12.1% loss on those holdings last year. It is also working make its portfolio “less Canadian,” Clark said, adding that two-thirds of the fund’s real estate investments are in Canada.

“The core of our strategy is a belief that we should be partnering with best-in-class investors who are able to provide us with access to investment opportunities that we realistically couldn’t originate on our own,” Clark said. “We have a number of partners we’re looking to work with.”

IMCO was created less than five years ago to consolidate several public-sector funds under one manager. It’s still in the process of building its investment team and diversifying the assets it inherited.

The pension manager for Ontario posted an overall gain of 5.4% for 2020. Real estate losses were offset by strong returns from credit and stocks.