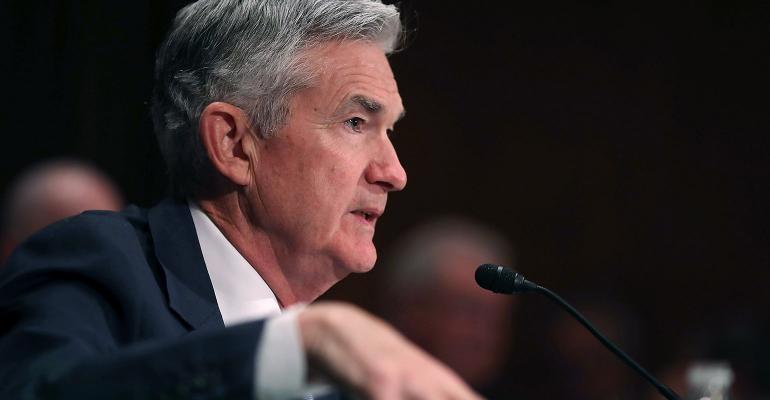 The Federal Reserve looks all but certain to keep rates unchanged.

(Bloomberg)—While Jerome Powell is expected to reinforce the signal that policy is on hold at the central bank’s meeting on Wednesday, some of his colleagues may be looking ahead to when they should hike again.

The Federal Reserve chairman looks all but certain to keep rates unchanged after reductions at the previous three gatherings as insurance against slowing global growth and trade disputes. The Federal Open Market Committee will release a statement and updated quarterly forecasts at 2 p.m. in Washington with Powell holding a press conference 30 minutes later.

Powell is likely to repeat his recent comments that both monetary policy and the economy are “in a good place” and that it would take a “material reassessment” of the outlook to prompt a change in rates.

The FOMC’s rate forecast through 2022 will be closely watched. While economists surveyed by Bloomberg see them staying on hold for the next two years, a sizable number of Fed officials may prefer to resume raising rates as early as 2020.

“The dot plot is most likely going to say rates are on hold next year,” said John Herrmann, director of U.S. rates strategy at MUFG Securities Americas Inc. “But it’s a really close call. There will be a segment of the FOMC that wants to get back to normalizing rates.”

Investors are pricing in no change this week and one additional cut by the end of next year, though odds of a cut lessened after a stronger than expected U.S. payroll report. Labor Department data on Friday showed 266,000 new jobs were created in November, the most since January, while wages topped estimates.

In its forecasts, the committee may lower the estimate of the long-term unemployment rate from 4.2%. That’s because wage pressures remain modest despite unemployment matching a half-century low of 3.5%. Growth and inflation forecasts are not expected to change much.

“The dot plot previously signaled that the next Fed action will be an interest rate hike in 2021. The latest iteration will signal whether policy makers are considering rate moves in the run-up to the presidential election.”

“The jobs report has put wind into the sail of Jay Powell going into the press conference,” said Julia Coronado, president of MacroPolicy Perspectives LLC. “The insurance seems to have worked. At the same time there are no inflation pressures. Wage growth is fine but they can be patient. It is a pretty happy way to end the year.”

The FOMC statement is likely to get only minor tweaks, reflecting little change in the outlook since the last meeting. It could upgrade its description of the job market slightly, while continuing to characterize growth as being “moderate.”

Holding rates steady in a target range of 1.5%-1.75% may also see Powell end the year on a vote of unanimous support. Previous 2019 meetings have been marked by dissents from the Kansas City Fed President Esther George and Boston’s Eric Rosengren, who opposed rate cuts, and James Bullard at the St. Louis Fed, who sought a deeper reduction at the September meeting, when officials cut by a quarter percentage point.

George and Rosengren have argued low rates could increase financial stability threats, and a recent Fed report echoed those concerns, noting they could promote risky investment.

Overshadowing the meeting for some investors may be lingering uncertainty over President Donald Trump’s trade dispute with China, as well as the prospects for Brexit. As a result, Powell might want to emphasize that the Fed is keeping its options open, said Lindsey Piegza, chief economist with Stifel Nicolaus.

“I would prefer to hear a more data-dependent stance as opposed to a predetermined position on the sideline, but I am only cautiously optimistic for such a tone,” she said.

The U.S. central bank may also discuss its balance sheet, though it has preferred to announce any changes separately from FOMC meetings. The committee is buying Treasury bills at an initial pace of $60 billion a month. Officials view this as a technical change to restore ample banking reserves in the system to relieve strain in repo markets, and not intended as stimulus.

To contact the reporter on this story: Steve Matthews in Atlanta at smatthews@bloomberg.net.

To contact the editors responsible for this story: Alister Bull at abull7@bloomberg.net