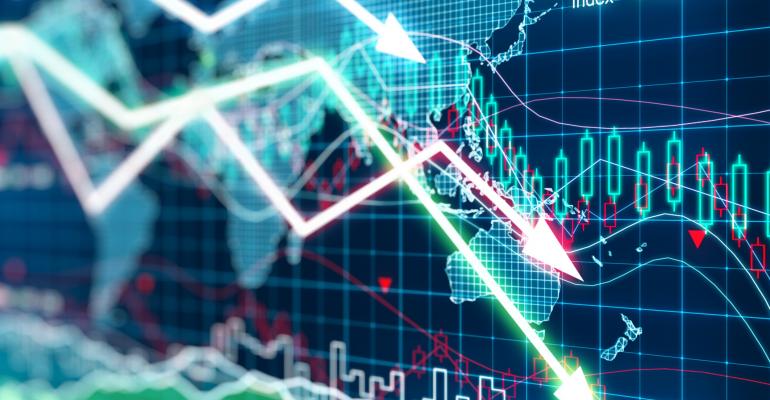 If yields on benchmark 10-year Treasuries go to zero, banks, insurers and pension systems will be hard- hit.

(Bloomberg Opinion)—The Federal Reserve has a lot to worry about these days. And while it's not often mentioned, at the top of the list should be preventing rates on longer term U.S. Treasuries, the world’s risk-free benchmark securities, from falling to zero.

Treasuries play a critical role in providing ample liquidity to the global financial system because they are a manifestation of the dollar’s reserve currency status. As such, they are the most important store of value and a critical hedging instrument for global market participants. The Treasury market is also the primary vehicle through which the Fed transmits monetary policy.

But if yields on benchmark 10-year Treasury notes go to zero -- a no longer ludicrous suggestion after Russia walked out of the OPEC+ meeting without a deal -- then all of those key roles get upended. Especially hard hit will be banks, insurers and pension systems worldwide.

The business model of banks is predicated on borrowing at low short-term rates and lending the proceeds at higher long-term rates. But if the gap between short- and long-term rates evaporates, lending would come to a standstill, especially if this were to happen with nominal yields falling to zero. As for pensions and insurers, they need returns of 6% to 7%, which they are definitely not getting from their holdings of stocks or credit-related securities these days. The need for potential bailouts of pensions would become a very real prospect for federal authorities.

But the Fed can take preventative measures that go beyond just cutting interest rates. In fact, the central bank should reach into its toolbox and put a floor under long-term yields. Recall that in September 2011, then Fed Chairman Ben S. Bernanke employed a strategy dubbed Operation Twist under which the central bank used the proceeds from maturing short-term bills and notes it held on its balance sheet to buy longer-term Treasury notes and bonds in order to narrow the yield curve. The program was so successful that 10-year Treasury yields dropped to what was then a record low of less than 1.50% in mid-2012.

The Fed should now do the opposite, though while still maintaining its intent to ease monetary policy. Call it Operation Reverse Twist with a quantitative easing kicker. The first step would be for the central bank to conduct auctions to sell its holdings of longer-term bonds in coordination with the Treasury Department. At the same time, the Fed would buy more Treasury bills and short-dated notes than it is selling from its portfolio of longer-term securities.

This would still be a net easing of monetary policy but with the aim of boosting long-term yields and preserving the integrity of the financial system. To be sure, this plan isn't without risk. If the public interpreted the Fed’s sales of long-dated holdings as any form of tightening, that would put further pressure on equities, credit markets and other riskier assets. Current Fed Chair Jerome Powell and his colleagues would have to form a unified communications front, which is something that could prove tricky for a central bank not known for its clear messaging.

It's time for Fed officials to conceive a plan to combat nominal Treasury yields from falling so low that they threaten the global financial system. Powell must recognize that no two crises are alike, and what worked before may not work now.

To contact the author of this story: Danielle DiMartino-Booth at [email protected].