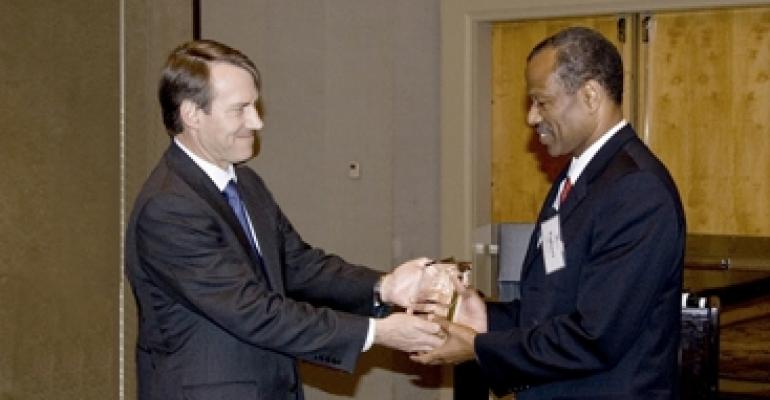 Growing up on the Caribbean island-nation of Antigua, Egbert Perry recalls, “I never felt poor.” True, his father, Percival Perry, earned only about $1,000 a year running a chicken feed business, and Egbert was one of 11 children.

But wealth comes in many forms. For years after his father’s death, people would come to the family store to pay back money Percival Perry had lent them with little expectation of repayment. The goodwill of Antiguans was shown when Percival died, and the capital city of St. John’s shut down for the funeral.

"My father was kind, generous and highly principled, no matter the cost to him personally," Egbert Perry remarked in 2006 when he established a scholarship named for his parents.

Perry has received numerous honors of his own, and at an event Dec. 2, the leadership of Atlanta’s real estate industry lauded him for his principles and achievements. The Real Estate Investment Advisory Council (REIAC) and Georgia State University inducted Perry into the REIAC/GSU Hall of Distinction.

The highlight of the ceremony was a 45-minute question-and-answer session with Perry, moderated by National Real Estate Investor Editor-in-Chief Matt Valley. What emerged from the interview was a depiction of the adage of “doing well by doing good.”

For example, when asked to describe his guiding value, Perry didn’t cite profit expectations or even the number of developments he has built or plans to build. Rather, he said his goal was “to create value in cities and to rebuild the fabric of communities.”

That mission is reflected in developments of The Integral Group, the Atlanta-based development and investment management firm where Perry is chairman and CEO. When he launched Integral in 1993, Perry recalls, “no one was knocking themselves out to develop in urban centers. People who had choices left. What remained were people who didn’t have choices.”

The result was that inner cities were characterized by “concentrated poverty,” Perry says. Atlanta was one of the worst, with a higher percentage of its population living in deteriorated housing projects than any other large American city.

The laboratory for these thoughts was the land on which America’s first public housing was built, Atlanta’s Techwood/Clark Howell Homes, which by the mid-1990s had become synonymous with all that was wrong with “the projects.” At the time, Atlanta was preparing to host the 1996 Olympic Games — and the entire world would see the horrible public housing that cratered much of the city.

Perry notes that a leading Atlanta educator, Norman Johnson, provided the key to building a successful alternative to Techwood/Clark Howell. The elementary school embedded in the housing project was the second worst performing in the city. “Norm convinced me to create a state-of-the-art school and let that be the anchor for the long-term financial strategy,” Perry says.

The school that was created, Centennial Place Elementary, sits on the edge of the mixed-use, mixed-income community Integral built to replace Techwood/Clark Howell. “That way it can reach out to other neighborhoods,” Perry says.

And, as the 60-acre Centennial Place development has matured, it has transformed a large area around Georgia Tech. That transformation has been replicated around the city, as the Atlanta Housing Authority (AHA) has torn down all of its large housing projects. That was accomplished with a series of public-private partnerships, and Integral has been the first and one of the most prolific of AHA’s partners.

In 1996, Centennial Place was named by the U.S. Department of Housing and Urban Development (HUD) as the “National Model” for urban revitalization projects, and has been used nationally as a template for similar developments in other urban centers throughout the nation.

In the current economy, where any development is rare, Integral is still building. Its current major development is emerging just east of Grady Memorial Hospital: Auburn Pointe, built on the site of AHA’s now-demolished Grady Homes.

“We’re getting our behinds kicked just like everybody else,” Perry says of the economic downturn that has hit the real estate industry particularly hard. “But we’re also starting to look at life afterward.” That new look is apparent at Auburn Pointe, where the financing structure included housing tax credits, an equity source that has dried up in the current economy.

Yet, with innovation that is Perry’s hallmark, new financing that involves federal stimulus funds administered through the Georgia Department of Community Affairs was secured. Just as important, Integral was able to employ the latest energy-efficiency and low-environmental-impact techniques to assure a sustainable community and serve as a model for other “green” development in Atlanta.

There are certainly challenges to the niche Integral occupies, which Perry describes as a “market-rate development with a seamless affordable component.” Early on, Perry discovered that mixed-income means that Integral must “work in social challenges to what is otherwise an economic situation … create a community with a common set of values and forget about incomes.” To accomplish that, Integral has a division that provides long-term counseling to families moving out of public housing.

Other challenges are also inherent in Integral’s work. “When you talk about mixed-use, capital is harder, an uphill climb,” Perry says. And, the rate of return on sustainable urban communities leads Perry to quip, “It’s not clear that (our finances) are different than a non-profit.” Still, he says that by diversifying, Integral’s various divisions “all eat a little less but we win the engagement.”

When in 1993 Perry left H.J. Russell & Co. — the Atlanta construction titan where Perry worked for 13 years — he envisioned a company with 15 people. “But we got to 300 (employees) because we wanted to control what we do. We develop, we build, we own, we manage.” Since its inception, Integral has been involved in billions of dollars of real estate transactions in over a dozen major metropolitan markets in the United States and two in the Caribbean.

For most of his youth, Perry attended school in Antigua. He received a scholarship to attend a private school in New York for his last two years of high school. By then, he already knew part of his life’s direction. In an Encyclopedia Britannica, “I saw a suspension bridge and asked Dad who did this.” His father told him civil engineers build bridges.

Despite all of those degrees, Perry recounts, “Mom (Margaret Adams Perry) and Dad were disappointed I didn’t get a Ph.D. Mom didn’t speak to me for six months.”

In 1990, the University of Pennsylvania inducted Perry into the “Gallery of Distinguished Engineering Alumni” as the 11th member in the university’s 250-year history. Perry now serves on the Board of Trustees of the University, a position that he has held since 1996. He also is a member of the board’s executive committee.

In 2006, Perry led an effort on behalf of Atlanta Mayor Shirley Franklin as co-chair of the Peachtree Corridor Task Force, to help Atlanta create a grand vision for the city’s future development along the city’s entire 14.5-mile-long, four-block-wide, north-to-south spine, with Peachtree Street at its center.

That vision will be used to guide the direction and nature of future development along that corridor of the city for the next several decades. This follows a long list of other civic contributions that Perry has made for almost three decades.

From a child born into Caribbean poverty, Perry has established himself as a civic leader and an entrepreneur who measures success both in his company’s bottom line and in the human transformation that results from Integral’s work. As Perry puts it, “This has gone way further than what I had ever imagined.”

John F. Sugg is an award-winning business and investigative journalist, and the retired corporate senior editor of Atlanta-based Creative Loafing Newspapers. Editor’s note: This article is the result of research and several interviews with Egbert Perry by the writer. Other than the first quotation, all of Perry’s remarks are from his Dec. 2 induction into the REIAC/GSU Hall of Distinction.