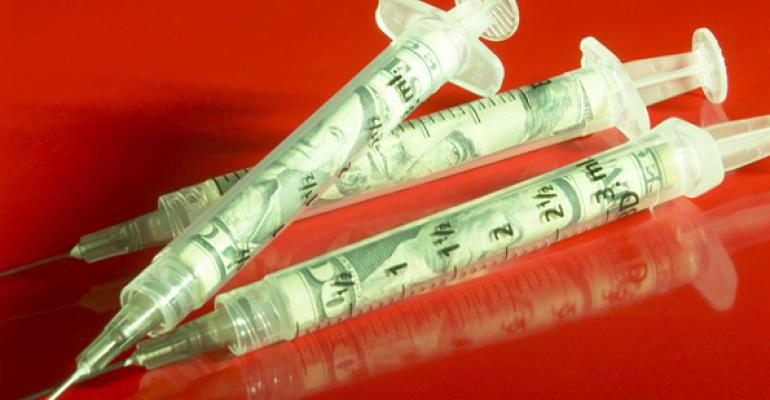 They say an ounce of prevention is worth a pound of cure. Yet when it comes to addressing client concerns about current and future health care costs, most advisors don’t even offer even so much as a periodic check-up.

But uncertainty over health care coverage, laws, and costs are high on the list of personal and financial worries of many Americans, especially those with whom you most want to work.

A recent Gallup poll of working Americans said that the biggest employment-related fear held by respondents was a possible reduction in their health insurance benefits—more so than an apprehension over a decline in work (and pay), or being completely laid off.

Even those who are older, wealthier, and closer to qualifying for Medicare are nervous about their healthcare expenses, according to a Harris Poll commissioned by Nationwide Financial.

That survey found that among respondents who had at least $250,000 in investable assets and who plan to retire by 2020, 46 percent either “somewhat” or “strongly” agreed with the statement, “I’m terrified of what health care costs may do to my retirement plans.”

Those who are already retired weren’t much more confident, as the poll found that nearly a third of that group acknowledged a high degree of anxiety over paying for medical expenses.

As much as current and would-be retirees might fear overwhelming future health care expenses, what they’re paying today is nothing to sneeze at, either.

The Milliman Medical Index found that in 2012 it will cost $20,728 for a family of four to receive health care via a preferred provider plan, the type of health insurance most commonly offered by employers.

That represents almost a 7 percent increase over 2011, a rate of inflation that has been typical for the index during the past several years.

True, the majority of that expense is technically borne by the employer. But the financial burden has shifted toward the employee in the past several years, and is likely to continue to do so.

Retirees don’t have it much better, even after attaining Medicare eligibility. Each year Fidelity Investments calculates what a 65-year-old couple can plan to spend on medical expenses over the rest of their expected lives. The most recent figure came in at about $240,000, or about $500 per month. That astounding number is just for the couple’s out-of-pocket costs, and doesn’t include any long-term-care expenses.

Of course, the worry and uncertainty clients have about their personal health care costs is compounded by the political back-and-forth regarding the role of government in the process, as well as the obligations of health care providers and insurance companies.

The Affordable Care Act (ACA) was put in place in March 2010, but opponents quickly fought its legitimacy and eventually took the battle all the way to the Supreme Court. In June 2012, the Court confirmed the validity of most of the legislation, but it’s unlikely that those who are opposed are going to give up the fight any time soon.

Even if the remaining components of the ACA are left in place, the new rules mean that the need to reevaluate the clients’ coverage options will be ongoing, and could occur every time they change employers, or even move to a different state.

Many of your boomer clients have enough money to retire comfortably, yet are still well under age 65, and therefore unable to qualify for Medicare. Their plans for an early retirement can be quickly derailed by the inability to afford private health insurance, or to qualify for it at any price.

Those who are financially independent, nearing age 65 and eligible for Medicare might still not be able to retire if it means leaving their employer-provided health insurance.

For starters, they may have younger spouses who are far from 65 and who may have to find private insurance on their own if their older partner retires.

The worry doesn’t stop once the clients are on Medicare. Changes in supplemental insurance policies and programs can make this issue even more confusing, just as aging clients become less able to comprehend the various details.

And the Medicare program’s precarious financial status will likely increase the cost borne by beneficiaries, while, at the same time, reducing the amount of benefits.

What You Can Do

Respondents to the aforementioned Nationwide/Harris Poll don’t have a lot of faith in their financial advisors to help with the important issue of getting health care and paying for it.

The majority of retirees and the soon-to-be-retired agreed with the statement, “Most financial advisors are not equipped to discuss retirement health care costs with their clients.”

You can surprise any skeptical clients by learning about the issues and options. Start by visiting www.healthcare.gov and www.medicare.gov to get information from the government.

For more information on private health insurance options, you can go to www.ehealthinsurance.com. The site even offers a free digital booklet that you can download called Individual Health Insurance for Dummies.

Make sure you add a section on “covering health care costs” to your list of topics to review with your clients. Inquiring about the subject will likely leave you with two groups of equally grateful respondents: those who don’t know, and those who will appreciate your assistance in alleviating the anxiety.